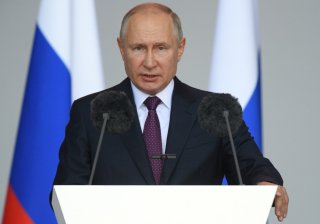 British foreign secretary Liz Truss met with her Russian counterpart Sergei Lavrov in Moscow on Thursday. Truss called on the Kremlin to withdraw the troops it is reportedly amassing along Ukraine’s eastern border, reiterating that a Russian invasion of Ukraine would provoke an unprecedented sanctions package from London. Lavrov characterized the talks as unproductive, charging the British side with refusing to consider Russia’s position in good faith. “I’m honestly disappointed that our conversation turned out like the mute with the deaf. We appear to be listening but we’re not hearing anything. Our detailed explanations fell on unprepared ground,” Lavrov said.

Truss’ trip—the first visit to Moscow by a British foreign secretary in over four years—was seen as a crucial next step in the United Kingdom’s effort to dissuade Russian aggression against Ukraine with a blend of diplomacy and deterrence. The high-profile talks likewise marked a watershed political moment for Truss, who is increasingly seen as a viable contender to replace the embattled Boris Johnson as prime minister. But those efforts backfired, with the Russian side catching the foreign secretary in a major gaffe. Lavrov, a famously crafty negotiator and an eighteen-year veteran in his post, laid a snare for Truss, asking if she would recognize Russia’s sovereignty over Rostov and Voronezh—two regions in the country’s southwest. According to two diplomatic sources quoted by the centrist Russian newspaper Kommersant, Truss took the bait: The UK “will never recognize Russian sovereignty over these regions,” she reportedly said, before being corrected by the British ambassador to Russia Deborah Bronnert. Kremlin officials and Russian state media quickly seized on the gaffe. “This is the reality in which we have to defend our position,” lamented Kremlin spokesman Dmitry Peskov in a briefing.

London does not deny that the exchange that took place, a British source told Reuters, but attributes the error to a simple miscommunication rather than a lack of knowledge. “It’s total rubbish and classic Russian propaganda,” the source said. Truss said in a later interview that she thought Lavrov was referring to Ukrainian territory. “They say Russia is waiting until the ground freezes like a stone so its tanks can easily cross into Ukrainian territory. I think the ground was like that today with our British colleagues, from which numerous facts that we produced bounced off,” Lavrov quipped during a tense joint press conference with Truss.

The Truss-Lavrov talks were followed by a meeting between British defense secretary Ben Wallace and his Russian counterpart Sergey Shoigu on Friday. According to Wallace and preliminary reports from Russian state news sources, the Friday talks were markedly more cordial. “It was a constructive and frank discussion,” said Wallace during a press conference. “I am grateful that we agreed to meet in order to discuss a wide range of issues, including the situation on the Ukrainian border, as well as a draft agreement with NATO.” Wallace added that they discussed the importance of implementing the Minsk agreements, a beleaguered diplomatic framework for the reincorporation of the separatist, pro-Russian Donetsk and Lugansk People’s Republics back into Ukraine. Wallace denied earlier reports that London had sent 600 special forces soldiers to Ukraine. “I wouldn’t believe everything you read in the media to be brutally honest. There has been no plan to send 600 special forces or any forces of that scale to the Ukrainians,” he noted, adding that the presence of British military personnel in Ukraine is confined to the small training team dispatched along with London’s recent shipment of anti-tank missiles to Kiev. Wallace assured the Russian side that London’s military aid to Ukraine is limited to defensive, short-range weapons that would only become tactically relevant in the event of a Russian incursion into the country. “Shoigu emphasized that the Russian Defense Ministry was ready to consider proposals to re-establish bilateral military cooperation,” according to a Kremlin readout. “An understanding was reached to continue contacts between the defense ministries.”

The Wallace-Shoigu meeting appeared to be more amicable in tone and productive in content than the earlier verbal duel between Truss and Lavrov, but a comprehensive solution to the security crisis plaguing Eastern Europe remains as elusive as ever.

The most recent round of “Normandy Format” negotiations—involving Russia, Germany, France, and Ukraine—in Berlin this week underscores the deep-seated diplomatic fault lines between Moscow, Ukraine, and the West. Ukraine rejected the Russian position that Kiev should negotiate directly with the Donbass separatists. “Russia insists that Ukraine conduct a direct dialogue with the so-called Donetsk and Luhansk people’s republics,” said Foreign Minister Dmytro Kuleba. “If Ukraine agrees to this, then the status of Russia will change from being a party to the conflict to the status of being a mediator in the conflict. That is why we do not go for it.” The dispute stems from a fundamental disagreement between Russia and Ukraine over the spirit, if not the letter, of the Minsk agreements. Kiev understands Minsk to be an agreement between Russia and Ukraine, but the Kremlin claims to be a mediator rather than a party to the conflict.

“Unfortunately, almost nine hours of negotiations ended without any visible, tangible results expressed in documents,” said Russian envoy Dmitry Kozak. “We [at the time] agreed that the Normandy format should overcome all differences regarding the interpretation of the Minsk agreements at any cost since the Normandy format is a control mechanism when it comes to the Minsk negotiation process in the Contact Group. But today it wasn’t possible to overcome these differences.”

The Kremlin has stressed that there is no alternative to ending the war in Donbass—which has lasted longer than World War II and cost tens of thousands of lives—other than the full implementation of the Minsk Protocol, which would give the pro-Russian separatists a generous autonomy arrangement and sweeping veto powers over Ukraine’s foreign policy decisions.

“I believe that there is simply no other alternative [to Minsk]. I repeat once again, in Kyiv, they either say that they will comply, or they say that this will destroy their country,” said Russian president Vladimir Putin following during a press conference this week with French president Emmanuel Macron. “The incumbent president recently stated that he does not like a single point of these Minsk agreements. ‘Like it or don’t like it, it’s your duty, my beauty.’ They must be fulfilled. It won’t work otherwise,” Putin added, invoking a folk phrase used half-jokingly by Russian school teachers on obstinate students.

U.S. secretary of state Antony Blinken said on Friday that a Russian invasion could be imminent, with a recent U.S. intelligence assessment reportedly concluding that Putin has accelerated his timetable such that Russia may attack Ukraine “within days.” President Joe Biden called on all U.S. citizens in Ukraine to leave the country immediately in a Friday interview with NBC News anchor Lester Holt. “It’s not like we’re dealing with a terrorist organization. We’re dealing with one of the largest armies in the world. It’s a very different situation, and things could go crazy quickly,” he added.

On Saturday, Biden and Putin spoke for slightly over an hour. Biden warned Putin that Washington would act “decisively and impose swift and severe costs” on Russia if it invades Ukraine. Whether that warning had much effect upon Putin’s deliberations is an open question. For now, America continues to pull its military personnel from Ukraine. Russian presidential aide Yury Ushakov called the conversation between Biden and Putin “balanced and businesslike” but also noted that it took place “in an atmosphere of hysteria about the supposedly imminent Russian invasion of Ukraine by American officials, everyone knows this.” The ball remains in Putin’s court.