Will Bolton’s Ouster Lead to Changes In Trump Foreign Policy? 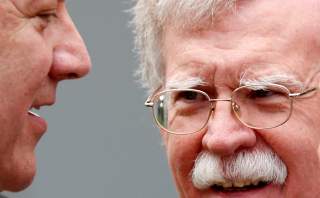 “I informed John Bolton that his services are no longer needed at the White House. I disagreed strongly with many of his suggestions, as did others in the Administration, and therefore I asked John for his resignation, which was given to me this morning,” Trump tweeted.

Bolton almost immediately challenged this version of events. “I offered to resign last night and President Trump said, ‘Let’s talk about it tomorrow,’” the now former advisor tweeted. Bolton was simultaneously contacting multiple reporters to contradict the narrative that he was fired instead of leaving of his own accord.

The firing comes hours before what was meant to be a joint press conference including Bolton, Secretary of State Mike Pompeo, and Secretary of the Treasury Steven Mnuchin to designate Al Qaeda’s branch in Syria as a terrorist organization.

Nicholas Heras, who frequently engaged with U.S. officials who work on counterterrorism policy, said that the topic itself had little to do with Bolton’s firing. “The U.S. has been considering this move for awhile,” the Center for a New American Security fellow told the National Interest.

When asked about Bolton’s departure during the now-truncated press conference, both cabinet officials smiled. “The president’s entitled to the staff he wants,” Pompeo said, he was “right to do so.” Mnuchin added, “The president’s view of the Iraq War and Ambassador Bolton’s were very different.” Bolton had a testy working relationship with both during his seventeen-month tenure.

The conflict finally reached a breaking point last night between Bolton and President Trump, leading to an argument over the Afghanistan peace process. Trump has favored a withdrawal from the country for years, and the administration has been engaged in talks with the Taliban for months. Trump scuttled a planned meeting with Taliban leaders over the weekend at Camp David.

“It’s interesting just to trace Trump’s security advisors. There have been two iterations,” explained Maj. Danny Sjursen, who served tours in both Iraq and Afghanistan. “There were the troika of generals, the ‘adults in the room’ who weren’t, they argued against withdrawal from Afghanistan, but they did so with the support of the media because they were adults and they were responsible. And the second group of national security advisors are the neoconservative retreads, we’re talking Bolton and Pompeo. And they’re against it because they’re ideologically opposed to anything that speaks of American withdrawal or lack of interventionism.”

Brett McGurk, who served as the special presidential envoy to the counter-ISIS coalition under both Trump and President Barack Obama, criticized the “shambolic process” under both sets of national security advisors. “There was never really a national security process that connected to the president,” he said at an event at the Brookings Institute, three hours after Bolton’s firing.

Sjursen doesn’t believe the chances for withdrawal from Afghanistan are really dead, due to President Trump’s mercurial nature, and the sudden lack of Bolton as a roadblock. “I think he’s been ill served by his national security advisors from the start. I think his instincts are more sound than theirs, even if he is an absurd figure in other ways,” he told the National Interest.

The departure of Bolton, a lifelong foreign-policy hawk and unilateralist, opens up possibilities for diplomatic breakthroughs in numerous theaters.

“It probably is a reflection of the fact that Trump wants to pursue diplomacy in a few areas, and that it became too costly for him to have this ‘saboteur-in-chief’ on staff, essentially having a fox in the henhouse. It signaled insincerity on Trump’s behalf,” said Trita Parsi, executive vice president of the Quincy Institute.

“The collapse of Afghanistan talks have left Trump with few potential diplomatic victories on the horizon: Afghanistan more or less gone, Israel/Palestine clearly gone, North Korea not going anywhere, China not going anywhere,” he told TNI. “Iran may be the one that he's turning his eye to. And for that, he needs to fire Bolton.”

Pompeo reiterated at the White House press briefing that Trump would be open to meeting Iranian president Hassan Rouhani.

“If he got rid of Bolton, he’s not going to pick another neocon, one wouldn’t think. So, in terms of Venezuela, it’s got to lead to a lessening of the chance for regime change,” said Silverstein.

Perhaps the biggest change in policy may come with Korea.

“Everything is possible now,” said Lt. Col. Daniel L. Davis, senior fellow at Defense Priorities. “They [North Korea] absolutely want to engage, because those sanctions are biting. And if there’s any chance that they can move back forward again, they’ll take it. They felt like they were betrayed in Hanoi because things were moving in a very positive direction very consistently for well over a year up to that point. Bolton was the chief target that North Korea felt was in the way.”

Biegun’s name has been dropped as a possible surprise candidate to replace Bolton, although Davis thinks this is unlikely. “The bigger prize for him is Deputy Secretary of State, which I understand he’s also being seriously considered for. I think Biegun would be a better fit at number two at State . . . I don’t think Biegun personality wise would get along with Trump.”

The president said a new national security advisor would be selected and announced next week. Mark Perry spoke with the National Interest about the possible candidates.

“The early betting of course is Fred Fleitz, but I don’t believe it,” Perry said. Fleitz served as Bolton’s chief of staff at the National Security Council last year, and is viewed as his closest confidant. It’s unlikely Fleitz would be selected to replace his mentor.

Perry had high praise for Col. Douglas Macgregor, a Fox News favorite who was previously shortlisted for the position. “I think Macgregor would be terrific. He’d get us out of these wars, and he understands the military well. He served in the military, he served in combat, which you certainly can’t say about John Bolton.” However, “[a]nyone who recommends Macgregor eliminates him. That’s the way this administration is.”

Gen. Jack Keane, a mainstay in Washington, DC has been referenced as a possible successor, although Perry believes he’ll play the role of kingmaker. “The guy who has the veto here, as I understand it, is Jack Keane. Trump confers with him regularly.”

It’s a resume requirement that Bolton’s replacement will have to work well with the secretary of state. “Pompeo spent a good portion of every day trying to get rid of Bolton. It sucks up a lot of time, it causes a lot of stability in the national security establishment. We don’t need to have a replay of that. I think that anyone who’s picked is going to have to cooperate with Pompeo, and in some cases defer to him. Pompeo is a very strong character in this administration.”