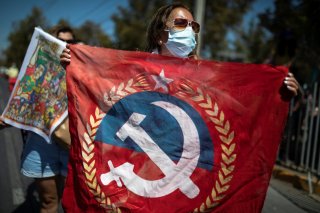 Chile was long regarded as a model capitalist country in South America. In the Human Development Index 2022, Chile ranks first among all Latin American countries. And in the Heritage Foundation’s Index of Economic Freedom 2022, it ranks twentieth, ahead of both the United States and the United Kingdom. In 2018, the poverty rate in capitalist Chile was 6.4 percent, in stark contrast to 76.6 percent in socialist Venezuela.

Despite Chile’s incredible success story—which I write about in more detail in my book The Power of Capitalism—Chileans voted for the socialist candidate Gabriel Boric in last year’s elections and will vote on a new constitution on September 4, 2022. How could this happen? In Santiago de Chile I spoke with Axel Kaiser, holder of the Friedrich Hayek Chair at Adolfo Ibáñez University, one of the leading universities in Chile. He is also the founder of the libertarian think tank Foundation for Progress in Chile.

Rainer Zitelmann: On September 4, Chileans will vote on a new constitution. You warn of the dangers—what are your main criticisms?

Axel Kaiser: To its core, the new constitution is shaped by a deep distrust of the market and an almost limitless trust in the state. With 499 articles, it is the longest constitution in the world, but instead of taking an example from good constitutions such as the German Basic Law, they have copied a lot from constitutions such as those of Venezuela and Bolivia. A big problem is that property rights are being eroded. Until now, when the state expropriated companies, it was obliged to pay them the full market price in cash. According to the draft of the new constitution, the state will soon only be required to pay an undefined “fair price,” and not in cash either. In addition, it guarantees all kinds of “social rights,” such as the right to work—this is more familiar from the constitution of the German Democratic Republic, where Article 15 stated: “The right to work is guaranteed.”

Zitelmann: The draft constitution also enshrines the rights of indigenous peoples in Chile. That sounds good at first. But you are opposed.

Kaiser: Yes, because this change would end the uniform application of the law in Chile. There would be autonomous zones, so to speak, where the application of Chilean law would be limited. Already today, the state of Chile is only able to enforce its laws via emergency regulations, because anarchy and violence prevail in many of these areas in the south. Even our new president, Gabriel Boric, who sharply criticized these emergency regulations in the run-up to the elections, has now had to use them himself because the violence is increasingly escalating. The perpetrators of violence are left-wing extremist groups, but they are closely linked to organized crime, especially drug trafficking.

Zitelmann: The fact that Boric has changed his approach since the election is nothing unusual for politicians—and in this case it is also to be welcomed. Will the hopes of those who believe that he will pursue a comparatively moderate policy be fulfilled?

Kaiser: Compared to the communists, who are becoming increasingly influential despite their modest share of the vote, Boric is of course moderate. On the other hand, he is undoubtedly a staunch socialist. Before his inauguration speech on March 11 this year, he demonstratively kissed the statue of Salvador Allende. For the socialists, this is certainly an important symbol, but for many others it fuels fears that he will embark on a radical path after all.

Zitelmann: Will Boric and his supporters win the referendum on the new constitution on September 4?

Kaiser: Boric’s approval rating is tumbling. Last year, when Chileans voted on whether there should be a new constitution or not, 78 percent were in favor! In other words, an overwhelming majority. More recently, several polls have reported that a majority of Chileans are against the new constitution. But a lot can happen between now and September 4, the outcome is still very much up in the air.

Zitelmann: It seems as if Boric and his government are holding back until after the vote, when they could implement more radical measures.

Kaiser: Boric has already shown two faces during the election campaign. In the first round he spread radical slogans, in the second round he was moderate. This enabled him to win over many centrist voters.

Zitelmann: Yes, my girlfriend, who comes from Chile, is certainly not left-wing, but she also voted for Boric because she perceived the opposing candidate, José Antonio Kast, as extremely right-wing. What do you think of him?

Kaiser: Kast is a national conservative and is therefore to my right because I am a libertarian. But on the other hand, the left-wing media have exaggerated, portraying him as a Nazi. They also used unfair arguments, for example by pointing out that his father was a member of the NSDAP. But no doubt many Chileans voted the same way your girlfriend did—they were not actually for Boric, but against Kast.

Zitelmann: In Venezuela, Hugo Chavéz also declared before the election that he was under no circumstances planning to nationalize companies and even described himself as the “Tony Blair of the Caribbean,” i.e., as a free-market-oriented social democrat. In fact, his policies quickly became increasingly radicalized until they ended in dictatorship and chaos. Is Chile going to become a second Venezuela?

Kaiser: I still believe in the common sense of the Chilean people and that it will not come to that. But either way, we are facing difficult and bitter years. What worries me most is the increasing violence in the country. And a return to the generally successful free-market policy, which, by the way, was also supported by socialists over the last decades—albeit with some reservations—seems unlikely to me. Why would the socialists facilitate nationalizations with the new constitution if they didn’t have corresponding plans up their sleeves? And, logically, the plans to introduce a wealth tax will also scare off investors.

Rainer Zitelmann is an author and German historian.