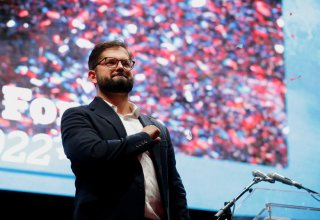 On December 19, Chileans elected a new president: Gabriel Boric handily defeated a conservative opponent in a runoff after support collapsed for centrist parties in the first round of the election. Boric is a former radical student leader turned legislator. He rallied a new coalition on the Left in a party called “Democratic Revolution” with Chile’s old-line Communist Party and several smaller groups.

Boric is the polar opposite of the five presidents who had governed Chile since its return to democracy in 1989. He is a thirty-five-year-old law school graduate who failed the bar exam, is living with his girlfriend, and is open about his mental health struggles.

Boric decried the step-by-step approach that sought to combine an expanding market-based economy while gradually improving conditions for lower-income Chileans. Instead, he positioned himself as the representative of a new generation impatient with gradualism. His supporters, convinced that existing policies were not doing the job for the bulk of Chileans, demanded big changes to overcome emerging challenges, such as the environment and gender equity, that they believed were being given short shrift.

How could this have happened? After all, Chile long had enjoyed the fame of being Latin America’s “model country,” which had found the recipe for economic development and political stability as one moderate government followed another. This apparent success story had its roots in the 1970s when Chile’s military government implemented tight financial policies and opened the economy to foreign investment. Industries such as mining, forestry, fisheries, and export-oriented agriculture all flourished.

After a grim first few years, in which austerity was combined with political repression, the reforms led to sustained growth, a flood of investment, job creation, and reduced poverty. A peaceful transition to democracy was achieved by 1990. The changes were most visible in Santiago, where glass skyscrapers sprouted. Journalists dubbed the glittering new business district “San-hattan.”

The Chile that emerged was without the enormous shantytowns found in Bogota, Caracas, Lima, and Rio de Janeiro. Instead, vast working-class neighborhoods sprawl, consisting of apartment buildings and tract housing often created under various government funding schemes. They resemble many similar projects constructed in Western Europe to meet the post-world War II surge of immigrants from the countryside and former colonies.

They vary in income levels and quality of life. Crime, drug abuse, and domestic violence are common in the worst neighborhoods. But the full range of housing options are available to a new middle class with greater resources. For the wealthy, the mansions in the foothills of the Andes would not be out of place in the canyons of Los Angeles.

The Chile of the last four decades is culturally distinct from that of the past. Collective identities such as those influenced by the Catholic Church and attendant traditional values (and with it, the Christian Democratic Party) have lost steam. So too has the blue-collar identification with labor unions and the Socialist and Communist Parties.

Some are uncomfortable with the new more individualistic, consumer-oriented society that has emerged. The late president Patricio Aylwin, Chile’s first president after the return to democracy, once proudly claimed to have never set foot in a shopping mall. On the Left, the rhetoric of solidarity and class seems archaic to those for whom environment, gender equity, and indigenous rights are more relevant. And economists have long warned of Chileans going into debt for housing, cars, and private school education for their children.

The incomplete successes of Chile’s reforms laid time bombs for the centrist politicians who governed until now. In the expanding economy, higher education was viewed as key to social mobility; however, the government did not expand the existing, publicly funded system. Santiago, for example, has the same three traditional universities it had in the 1960s.

Instead, it permitted the creation of private universities, including for-profit institutions. Students often financed their tuition through loans to manage the higher costs at these new universities. But quality varied greatly and several universities were forced to close, leaving students adrift.

Some private universities did acquire strong reputations, but others were little more than degree mills. The government cracked down on dubious institutions and expanded funding in recent years. Overall, the system has worked for many, but many others have found only debt and limited opportunities.

At the primary and secondary levels, the children of lower-income parents drift into the public school system. Middle-income families shop for better private institutions and take advantage of voucher programs. The elite send their children to high-quality fee-based schools. The public school system, starved of resources under the military government, received additional funding after the return to democracy, but Chile’s public schools remain a last resort.

The privatized pension system has avoided the bankruptcies which ruined public systems throughout Latin America and has provided needed capital for both public and private investment. It has also provided solid retirement for many participants. However, the payouts for those earning low salaries are meager, especially for those with long periods of unemployment. Pension fund administrators have also been accused of excessive management fees. More recent governments have worked to strengthen the system’s “solidarity” component in which those who participate contribute to a fund to assure a minimum payout for all.

Similarly, Chile’s private health insurance has provided quality services for those who participate. For those who do not, the state-run National Health Fund provides lower benefits and is marked by longer wait times for services. Here too, efforts have been made to increase the levels and quality of public health services while retaining the basic public-private distinction.

As Chile has become more sophisticated, “first world” concerns have arisen. The environment became a sensitive issue in an economy based on natural resources. So too have human rights, where the memories of the military government are close to the surface. Advocates press for gender equity and the rights of sexual minorities. The situation of Chile’s marginalized indigenous population has also gained sympathy in many quarters.

All of this brewed discontent through the 2010s, masked by successful alternation in power between center-left and center-right coalitions. Student protests—both high school and university—revealed emerging fissures in Chile’s consensus. The storm broke in 2019 with massive protests both in Santiago and elsewhere. These protests were largely peaceful, but a cadre of violent actors looted stores and did extensive damage to Santiago’s metro. A tough police response was criticized for human rights violations.

The protests rocked Chile’s establishment. The Chilean National Congress ultimately supported holding a referendum on whether or not to create a convention to rewrite the existing constitution. The referendum passed, and a subsequent vote elected delegates to the convention—with membership skewing hard to the left. The convention is currently meeting, and its outcome will be voted upon during Boric’s first year.

The decision to hold the convention marked the beginning of a political cycle which has culminated in the election of a president who campaigned promising dramatic change. But the collapse of Chile’s centrist political forces also gave rise to a new hard-right, led by conservative politician Jose Antonio Kast, Boric’s opponent in the runoff.

Kast emphasized law and order issues. He highlighted the stress caused by immigration from Venezuela and Haiti, violence in Chile’s south where forestry interests clash with indigenous groups, and crime and disorder in the cities. This new populist Right did not find favor with a majority of Chileans but proved to be a significant new actor with which Boric will have to contend.

The performance of incumbent president Sebastián Piñera has much to recommend it. But these new crises, together with the protests and their aftermath, meant that when his center-right coalition nominated a minister cut from the same consensus-minded cloth, he commanded little public enthusiasm.

The center-left coalition nominated a senator and former minister of the previous government of Michelle Bachelet who was similarly unable to generate excitement. The center-left also suffered from the fact that much of Chile’s Socialist Party, a key element of that coalition, felt a strong attraction to Boric’s new Left.

Boric characterized the center-left as timid and accommodationist. This touched a nerve among Socialists, many of whom were never fully comfortable with gradually increasing social inclusion while maintaining the basic economic model over the course of decades. Chile’s incremental progress never found a full-throated defender in the face of Boric’s challenge.

Kast played into Boric’s hand in the second round of the election. Kast was a one-issue candidate who had little new to say on issues of the economy and equity. He appeared to be a figure from the recent past, not the future. Boric also wisely toned down his rhetoric ahead of the runoff and benefited from endorsements from two former center-left presidents, Ricardo Lagos and Michelle Bachelet.

Boric has made campaign promises which will be hard to keep. His coalition will be unable to pass legislation unless it peels off some outside support—most likely from the Socialists. But even then, getting major changes through will not be easy. Conservative forces have their own presence in congress, particularly in the senate. Boric has made conciliatory noises in the post-electoral period, but how far he is willing to go in the face of demands for major change from his base of supporters is an open question.