Will China and India Collaborate or Feud Over Afghanistan? 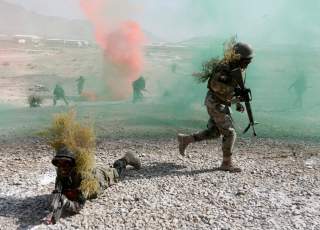 India has enjoyed a long period of primacy in Afghanistan but a growing Chinese interest in the war-ridden country is poised to upset that delicate arrangement. China and India’s acrimonious border disputes epitomize their ongoing strategic rivalry but inadequately reflect the nature of their coexistence in a third country like Afghanistan. Investing in development projects on increased connectivity and trade to stabilize Afghanistan―also to fill the gap given the potential U.S. exit―makes economic and strategic sense for both countries, which have their respective objectives, and also provides opportunities for a deepened cooperation. As the China-India competitive dynamics play out elsewhere, Afghanistan presents an opportunity for those dynamics to fluidly and seamlessly switch between cooperation and competition.

The China-India competition has many of the smaller neighboring countries in the region concerned about getting caught between the two Asian giants. The 2017 Dolkam standoff exemplified the predicament for countries like Bhutan, which became the site of a conflict beyond its control. Even absent direct confrontation, India has been suspicious of any Chinese presence in its immediate vicinity, such as its presence in Pakistan and Sri Lanka, and, likewise, Beijing has been intently watching the growing India-Japan rapprochement through joint projects and defense cooperation. However, there has been a recent effort from both sides to strike a more cooperative tone even amid mutual suspicion and rivalry, and Afghanistan is well-positioned to benefit from this sentiment.

A key area for enhanced China-India cooperation is counterterrorism, as both nations seek to reduce the presence and efficacy of terrorist cells operating within Afghanistan. China worries this security threat will metastasize into the unrest-prone Xinjiang Province, which borders Afghanistan’s Badakhshan Province and is home to a disgruntled and maligned Muslim population. India is concerned that a weak Afghan government leaves room for Islamabad to intervene and disturb the delicate, strategic balance between Pakistan and Afghanistan.

To that end, both China and India have worked separately to train Afghan soldiers to conduct counterterrorism tactics. In fact, China is reportedly building a small military base in Badakhshan to counter any insurgency spillover. In addition to its training efforts, India has also donated Mi-25 and Mi-35  helicopters to Afghanistan, which have proved invaluable for counter-militant operations. This, along with the recently launched program to jointly train Afghan diplomats, attests to the tremendous opportunity for deepening China-India cooperation on combating terrorism and promoting peace, as their goals are mutually reinforcing.

In contrast, when it comes to trade and investment, Afghanistan must often pick one offer over another, which can create tension in the region. Kabul’s long-standing diplomatic alliance with New Delhi has given it the upper hand in gaining access to Central Asian markets via Afghanistan, which serves Kabul’s goal of broadening its trade portfolio beyond Pakistan. This is exemplified by the trilateral transit agreement between India, Afghanistan and Iran to use the Iranian port of Chabahar as a regional trade hub. The Chabahar Port has the potential to rival the Pakistan port of Gwadar, a part of the China-Pakistan Economic Corridor, which is a focal point of China’s signature infrastructure undertaking: the Belt and Road Initiative (BRI). At its inception, BRI was envisioned to bypass Afghanistan, but China has since incorporated Afghanistan into the development and implementation of regional BRI projects.

In recent years, Chinese firms have also aggressively increased their economic footprint and won numerous contracts for major copper and iron mines in Afghanistan—a land rich with deposits of minerals and rare earth elements. Indian investments follow close behind and have been poured into substantial projects, including the construction of the Afghan Parliament building and the Salma Dam. Additionally, India has provided financial aid to Afghanistan so that it can refurbish its major highways and the electric grid. These improvements complement the long-standing mining contracts in central Afghanistan. To date, competition for the mining contracts has not been fierce, but limited natural resources and opportunities to take advantage of them could pit Chinese and Indian companies against each other.

As China-India competition continues unabated, Afghanistan is somewhat insulated from their more sensitive security concerns. Unlike in Iran and other countries, where the competitive aspects of the relationship are emphasized due to geopolitical reasons, Afghanistan allows the two Asian giants to compartmentalize touchy issues and cooperate on common interests such as counterterrorism. If the two can’t find a way to get along in Afghanistan where opportunities to collaborate exist, then they will be unlikely to anywhere else.

Zoe Leung is a senior program associate and Michael Depp is a program coordinator at the EastWest Institute, which aims to create constructive dialogues and prevent conflicts.

The views expressed in this publication are solely those of the authors and do not necessarily reflect the views of the EastWest Institute.