Will Iran Follow Israel and Keep Its Bombs in the Basement? 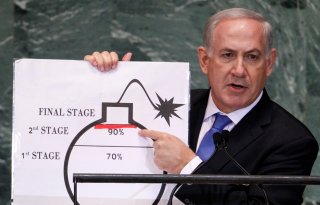 As negotiations aimed at reconstituting the Joint Comprehensive Plan of Action (JCPOA) stall, it may be time to start thinking about the unthinkable: living with nuclear enrichment infrastructure in Iran.

This is not the scenario the Trump administration envisioned when it repudiated the JCPOA or the option supported today by the Biden administration. Indeed, Secretary of State Antony Blinken explicitly opposed this outcome when he declared “What Iran can’t do is sustain the status quo of building their nuclear program while dragging their feet on talks. That will not happen.”

But that is indeed the predicament Washington confronts today. The current situation mirrors the strategy successfully employed by Israel in desultory nuclear talks over a decade with the United States that were sparked by the discovery of Israel’s enrichment activities at the Dimona nuclear plant in December 1961.

The United States is not playing chess with itself. If the Trump administration considered itself freed from the agreement to apply the policy of “maximum pressure,” so too does Iran. Indeed, as the parties met last week for the seventh round of negotiations in Vienna, the United Nations reported that Iran has started enriching uranium up to 20 percent purity using advanced IR-6 centrifuges.

Iran needs to look no further than Israel for a successful example of a country “sustain[ing] the status quo of building their nuclear program while dragging their feet on talks.”

For more than half a century, Israel has successfully developed and deployed an integrated, self-sufficient nuclear weapons development and delivery system in defiance of the non-proliferation regimes embraced by the international community.

The source of Israel’s ability to ignore insistent but fruitless diplomatic efforts aimed at forcing Israel to relinquish its nuclear weapons is the bargain it struck with the United States in the wake of the June 1967 war.

In 1968, Israel was keen to purchase the F-4 Phantom—the top-of-the-line U.S. fighter jet—and to establish a reliable source of modern arms and political support with Washington.

Washington hoped to use the sale of Phantoms as leverage to win Israel’s adherence to the Nuclear Non-Proliferation Treaty (NPT) and commit Jerusalem to mothball its nuclear weapons program centered at the Dimona nuclear plant, which Washington had been trying to shutter since Dimona’s “discovery” in 1960.

But negotiations between Department of Defense official Paul Warnke and Israel’s ambassador in Washington Yitzhak Rabin reached a far different conclusion. Under the terms of their understanding, Washington stopped efforts to force Israel’s adherence to the NPT and the closure of Dimona. In return, Israel got its Phantoms, a transfer which over the years evolved into an explicit and public U.S. commitment to assure Israel’s conventional superiority over its enemies. To this day, the U.S. commitment to maintain Israel’s “qualitative military edge” is solemnly declared by every new U.S. administration.

In return for the Phantoms and the end of pressure on Israel’s nuclear program, Rabin reaffirmed Israel’s longstanding commitment not to be the first to “introduce” nuclear weapons in the region. This flexible position enshrined a strategy of nuclear ambiguity under which Israel has developed, deployed, and even tested, a state-of-the-art arsenal of air, land, and sea nuclear weapons delivery systems. In short, Israel got guns and agreed to keep its undeclared and opaque bombs in the basement.

In times of crisis, notably the opening days of the October 1973 war, Israel deployed and even contemplated the use of nuclear weapons to stem a Syrian advance on Israel’s heartland. Yet the international community, led by Washington, has never contemplated a military solution to Israel’s undeclared nuclear capabilities. And Israeli actions—notably its “bomb in the basement” arrangement with Washington—have successfully protected its nuclear capabilities without precipitating international diplomatic or military intervention.

Iran, of course, is not Israel, and while the precedent is instructive, it is not prescriptive. Indeed, notwithstanding its shortcomings, the JCPOA remains the best option for containing Iran’s nuclear pretensions. The JCPOA, notes the State Department, “is the best path because it sets us out on an approach that is verifiable and that is sustainable and that is permanent.” However, as negotiators try to put Humpty Dumpty back together again, everything has changed but the text of an agreement that all sides are trying to resuscitate.

For the plan’s advantages, it is becoming increasingly clear that the international community may be unable to reconstitute the JCPOA, forcing the protagonists to look for a Plan B. Yet while most commentary warns of—or embraces—a non-existent military option, the Israeli model may be a more realistic source for policies aimed at keeping the nuclear peace in the Middle East.

Geoffrey Aronson is a non-resident fellow at the Middle East Institute and a former advisor to the EU and others on regional political and security issues.