Will the Liberal World Order Survive An Era of Upheaval? 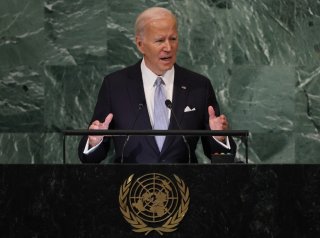 For decades, the contemporary world order, oftentimes referred to as the post-World War II liberal world order, has been argued about, agonized over, defended, lambasted, and the subject of enough speculative books and articles to fill the shelves of a medium-sized library.

And with good reason: world politics prior to the emergence of the current order was riddled with the bloodiest global and regional conflicts in history, and most thinking people wish to avoid returning to such a chaotic state of affairs.

But what if all of the clamor and din over the future of the liberal world order has glossed over its most important weaknesses and vulnerabilities, and the complex nature of the threats confronting it? Worse, what if those proposing solutions are simply doubling down on failed assumptions of the past?

That this liberal order—or what President Joe Biden and other Western elites like to call the “rules-based international order”—is confronting a sense of crisis is not a new observation. Ever since the United States heavily militarized its war against terrorism after the September 11, 2001, terrorist attacks and the global financial collapse of 2008, not to mention more recently Brexit and the election of Donald Trump, there has been plenty of soul-searching about the flaws and challenges to the current world order.

Now there are additional stressors from Russia’s war against Ukraine, specifically the escalating energy and inflation crises across Europe and the United States, along with stepped-up Chinese assertiveness in the Indo-Pacific and Beijing’s increasingly open and vocal opposition to the liberal world order itself.

Many in the West seem to believe that if NATO would just expand further in order to oppose Russia, and if it would begin openly confronting China in the Indo-Pacific—and if the West would fully commit to an even swifter transition away from fossil fuels toward “net-zero carbon emissions”—somehow the Western “rules-based order” can run world politics indefinitely.

This is not just wishful thinking, it’s whistling past the graveyard. Whether it’s being recognized or not, pressure is clearly building toward a moment of exacting change in world politics.

Connecting Past to Present

History is rife with examples of transformative moments in world politics that nobody saw coming. For example, there were the global wars of the French Revolution and the way Napoleonic France transformed conceptions of nationalism, the nation-state, and even war itself.

Or perhaps more relevant today is the events leading up to World War I. This was a war that no one saw coming but it had the effect of shattering centuries-old imperial empires—Austrian, Russian, Ottoman—and laying the foundations for an even more destructive world war two decades later.

Though no dots were being connected on how the world reached such a crisis point by 1914, in retrospect it’s all very clear: imperial powers who believed they would govern forever; a system of rigid military alliances in Europe that were poised to strike their enemies at the first sign of trouble; and independence movements within the multiethnic empires, oftentimes committed to the use of political violence to achieve independence.

The war itself was sparked in June 1914 by one of those violent scenes, when Serbian nationalists (some might call them terrorists) assassinated Archduke Franz Ferdinand, heir to the throne of the Austrian empire.

It is increasingly clear we are living through one of those moments in history today; future generations will wonder how we did not see what was coming.

Instead of imperial empires, we have a liberal world order that claims to uphold “universal values,” and which many in the West—taking their cues from the Stanford political scientist Francis Fukuyama—believe represents “the end of history” in world politics.

Instead of rigid alliances, there is a dominant NATO military alliance which, according to Biden, is no longer just about defending Europe but “the rules-based world order.”

And instead of nineteenth and early twentieth-century anti-imperial and anarchist terrorists assassinating members of royal families and heads of state across Europe—and even U.S. president William McKinley in 1901—there is globalized mass-casualty-seeking terrorism, most notably Al Qaeda and global jihadi movements, but also white nationalist and neo-Nazi terrorists within Western countries themselves who also seek mass casualties and political upheaval.

To be clear, liberal values have proven to offer the best foundations for domestic political and economic systems and, when used efficiently, to positively influence global politics. In the early post-Cold War period, the world witnessed what liberal values can do at their best by extending freedom and opportunity to parts of the world that never had them before, notably to former Soviet republics, India, and China, and helped pull hundreds of millions of people out of poverty.

However, Western governance of the liberal order has veered off of its efficient path in recent decades, in my view mostly due to Western hubris and a nearly universal certainty amongst Western elites that liberal values, liberal politics, and neoliberal economics are the only legitimate ways to organize domestic and international society. This hubris, and the overreach that has come along with it, has abetted the emergence of serious counter-movements that together pose a triple threat to world order.

The first consists of challenges from powerful non-Western states, including China, Russia, Iran, North Korea, and, to a lesser extent, India, and even NATO-member Turkey. Each increasingly views Western dominance in world politics as a fading enterprise, with some—notably China and Russia—planning new partnerships and alliances for a post-Western world. Note the difficulty in maintaining global sanctions against Russia outside of Western countries, despite Moscow’s brutal violations against Ukraine. Ironically, the biggest threat to Russia comes not from global sanctions but from the unexpected weakness of its military.

The second comes from powerful non-state actors, most importantly Al Qaeda and the global jihadi movement which has been at war against the West, and Arab and Muslim governments friendly with the West, for generations. This movement views the twenty-one years since 9/11 as an extraordinary success: the United States fought two bloody and costly wars in Iraq and Afghanistan, along with a hugely expensive, controversial, (and ongoing) global war on terrorism. Despite losing senior leaders in Al Qaeda and affiliated groups, the movement is patiently building strength in Taliban-controlled Afghanistan, Africa, and elsewhere, hoping to orchestrate another 9/11-style attack, perhaps this time with a nuclear device.

The third is the big wildcard: challenges from within the Western world itself, notably nationalist and populist movements rising in many liberal democracies, including the United States, Great Britain, France, Italy, Sweden, the Netherlands, and Germany. To state the obvious, without liberal democracies leading, there is no “liberal world order.” Across the West, millions of voters are rising up against many facets of liberal openness, including globalization, immigration, and, increasingly, high energy costs associated with green transitions. Governing elites in the West dismiss these legitimate grievances at their own electoral peril.

The Liberal World Order and Its Discontents

Before discussing ways to address these combined threats to the liberal order, it is necessary to review its basic foundations and the recent missteps committed in its name.

First, it is important to recognize that the liberal order is not a U.S. thing, even if the United States has been its titular and tangible leader since World War II. It’s a Western thing, grounded in Western liberal philosophy, and Western notions of liberal internationalism.

Again, there is plenty to praise here: this institutional order played a crucial role in bringing a peaceful end to the Cold War and in helping to facilitate the greatest period of shared prosperity in world history.

But in many ways, these successes have contributed to the order’s potential unraveling. That’s because, after the Cold War ended, each of the foundational institutions endeavored unrealistically to expand their missions too far and too fast.

Indeed, the biggest mistake supporters of global liberalism have made over the past seventy-five years is presuming that the post-World War II order and its corresponding institutions ushered in what the French Enlightenment philosopher Voltaire would call “the apotheosis of human history” and that this new world could escape the traditional forces that drive international relations, such as nation-states, nationalism, and counter-ideologies. Once the Cold War ended, this view was injected with steroids.

We see this in the major transformations that the UN, NATO, WTO, and EU underwent in the 1990s. Two of them—the WTO and EU—didn’t even come into existence until the 1990s. The WTO was a vastly more expansive and ambitious version of the General Agreement on Tariffs and Trade (GATT) born of the Bretton Woods system in 1944 while the EU was a more expansive and ambitious version of its Cold War predecessor, the European Economic Community.