Will Trump Really Pull the Trigger on Mexico Tariffs? 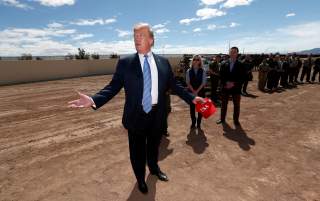 As President Donald Trump’s June 10 deadline approaches, his resolve to put new tariffs on Mexico has only grown firmer. “I think it’s more likely the tariffs go on, and we’ll probably be talking during the time the tariffs are on, and they’re going to be paid,” he told reporters in London yesterday.

Trump is using the executive authority provided to him by the national emergency he declared in February to unilaterally raise tariffs on all Mexican imports. The trade restrictions will begin at 5 percent on June 10 and increase 5 percent a month until they reach 25 percent in October. This is meant to compel the Mexican government to aid the Trump administration in its attempts to stop the flow of economic migrants crossing the southern border at a rate of over one hundred thousand a month.

“Tariffs are taxes levied on purchases that Americans want to make. In practice the burden of a tariff is split among the buyers and sellers, but even if it were fully paid by foreign firms, they will still respond by reducing their sales—which hardly helps the Americans who were eager to buy their imports,” explained economist Bob Murphy, who told the National Interest that “President Trump is certainly not indicating on Twitter that he’s gambling with the wealth of Americans in order to win a concession.” According to an economic analysis from Vox, a 5 percent tariff would cost each American household $180 a year and a 25 percent tariff would increase it to $900 a year.

“I’m skeptical that it’s going to work, and pressure the Mexicans to increase their cooperation, because Mexico always has a chip on its shoulder in regard to us and they might get their backs up and cooperate even less than they are now,” said Mark Krikorian, executive director of the Center for Immigration Studies. “On the other hand, there’s been at least some indication that Mexico is coming to the table and is willing to talk, so maybe it’ll work.”

Krikorian believes that if the tariff is successful in helping stop the border crisis, the positives will outweigh any economic consequences. “If it were to work, it would be worth the cost. That’s the issue. A 5 percent tariff isn’t very much. If it gets up to 25 percent, then it would start to impact U.S. car manufacturing that especially depends on imports of Mexican parts. But at 5 percent the effects would be relatively small, and if the Mexicans were to respond, it would be worth it. The question is how much cooperation from Mexico is enough? And we don’t know that, and the White House may not even know that. They might have to see if their satisfied with it, in a subjective matter,” he told the National Interest.

“[Acting Secretary of Homeland Security Kevin] McAleenan pointed to three things they wanted from the Mexicans on this. And two of them are relatively easily,” explained Krikorian. “They want more Mexican security on its own southern border and in choke points in southern Mexico to prevent people (Central Americans, and at this point Africans, Bangladeshis, Middle Easterners, etc) from actually making it through Mexico.” The United States has previously been in negotiations with Mexico about this matter.

“The number two request is that they do a better job of targeting the smuggling operations . . . He [McAleenan] said the logistical effort to move one hundred thousand people through a country every four weeks is immense. ‘This is noticeable,’ is the way he put it,” recalled Krikorian. “In other words, the Mexicans can see it. It’s not something you can hide. And so, we want them to do a better job of stopping these bus companies from moving people through. It’s almost become routinized and systematic.” Krikorian believes the Mexican government will be amenable to cooperation on these two points if it means preventing a tariff.

“The third thing though is the most important and the one the Mexicans are likely to resist the most, and that is a Safe Third Country Agreement. Mexico has its own asylum system, they’re a signatory to the UN Convention and Protocol on Refugees which governs these questions, but they have no obligation to take a third-country national back once that person gets into the U.S. They’ve always been cooperative and continue to be regarding the return of their own citizens; if a Mexican illegal alien sneaks across the border, they always take him back no fuss, no bother . . . But a Central American or Bangladeshi or Congolese illegal alien who crosses the border, turns himself into the border patrol, and requests asylum, that person Mexico does not have to take back,” Krikorian told the National Interest. “So, the point of the Safe Third Country Agreement, like the one we have with Canada, would be that if a person crosses through Mexico, and comes to the U.S. border (either sneaks across or presents himself at a port of entry), he wouldn’t be allowed to even apply for asylum because he should have done so in Mexico. He would simply be turned around, and Mexico would accept that person back. That’s the key thing they have to agree to. And they don’t have a strong incentive to do that, obviously.”

Politically, the tariffs on Mexico has put a deep split among the congressional GOP. “It’s again tied to immigration and a worsening crisis on the border, so some Republicans will be inclined to back Trump on this. But others will think it gets too close to using national emergency powers to raise taxes—not a winning issue for the GOP—and there are already misgivings about how much power Congress has ceded to the president on tariffs,” said James Antle, editor of The American Conservative.

After a long back and forth during a party lunch on Tuesday, Senate Majority Leader Mitch McConnell (R-KY) said that “there is not much support in my conference for tariffs, that's for sure.” Senator Ted Cruz (R-TX) was one of the most vocal opponents, saying “there’s no reason for Texas farmers and ranchers and manufacturers and small businesses to pay the price of massive new taxes.” The president has had some defenders, however. Sen. Marco Rubio (R-FL), a longtime defender of protections on his home state’s sugar industry, defended the president’s legal authority to raise tariffs. Even Sen. Lindsey Graham (R-SC), traditionally a defender of both free trade and a pathway to citizenship for resident illegal aliens, said, “Tariffs would be tough on the economy, but the border is broken, and it needs to be fixed. And if tariffs are what it takes to make Mexico do better on their side of the border, I’m all for tariffs.”

“If you had told me in 2016 Lindsey Graham would be Trump’s highest-profile Senate supporter on an immigration-related initiative, especially one involving tariffs, I would have said you were crazy,” said Antle.

There are whispers on the Hill, however, of a revival of the resolution of disapproval on the president’s national emergency declaration. The previous resolution to terminate the national emergency, vetoed by the president in March, passed the Republican senate in a 59–41 vote. If enough Republicans are concerned about the political pain resulting from the economic consequences of the tariffs, it could conceivably pass again with a veto-proof majority. When asked about the possibility of such a Republican revolt, Trump demurred. “It’s foolish. There’s nothing more important than borders,” he said.

But it’s also the case this afternoon that the White House is prepared for the tariffs not to go into effect if there is a sudden breakthrough in negotiations with Mexico.