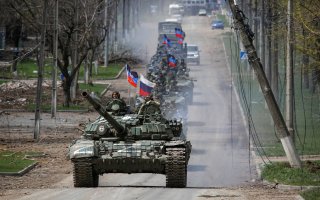 RUSSIA’S INVASION of Ukraine has served as a giant bolt of electricity recharging both a North Atlantic Alliance declared brain-dead only a few years before by French president Emmanuel Macron, as well as revitalizing the Group of Seven from a 1970s leftover into transforming itself into the bloc of the ten leading democracies (the D-10), as Asian and European partners of the United States came together in imposing draconian sanctions on the Kremlin. But this newfound moment of electroshock therapy will not last. The focus of American efforts moving forward must not be a backward focus on rectifying the mistakes of the 1990s, but a pivot to the emerging world of the mid-twenty-first century.

Vladimir Putin’s move against Volodymyr Zelensky, preceded by the COVID-19 pandemic, prompted the West to confront the vulnerabilities of excessive dependence on supply chains for the most critical raw materials and finished components running through the world’s two largest revisionist authoritarian states. There is a window of opportunity whereby domestic publics in North America, Europe, and East Asia are poised to pay higher costs to both reorient key economic linkages away from Moscow and Beijing and to invest in next-generation technologies, especially around energy, pharmaceuticals, food production, and manufacturing. These will upgrade existing U.S. alliances from being primarily about military defense into a broader, expanded definition of security that includes not only safety from armed attack but enhanced protections for climate, health, and the economy.

During the 1980s, the United States could leverage the technological prowess of its partners, as well as their economic vitality, to add to its own capabilities to hem in and contain the USSR. Just a few years ago, the European Union was set to pursue closer economic integration with China while the U.S. withdrawal from the Trans-Pacific Partnership was causing key Indo-Asian partners to hedge on their relationship with Washington. To peacefully balance China’s rise, the United States needs to reforge a democratic community based not only on shared values and geopolitics but also capable of delivering clear and concrete benefits to its members. And it must do so before old habits snap back—whether that be a return to overreliance on lower-cost Russian energy or the costs of redirecting supply chains out of the Chinese manufacturing hub. The Ukraine crisis has shown both the goad for immediate action but also the potential for longer-term backsliding as the conflict goes on and the short-term costs go up.

At the same time, the Russian invasion of Ukraine may signify the high-water mark of America's financial tools of deterrence and compellence. Unlike the Soviet Union, Russia was integrated into the American-led global economic system—including reaping the benefits of the dollar as the de facto global reserve currency and the strength and reliability of the U.S. financial system. We are currently testing the proposition that American financial power can deliver sufficient punishment, alongside deliveries of weaponry, to force a change in Russian actions in Ukraine. Yet no matter how that turns out, the rest of the world has been put on notice that the United States did not provide a series of international financial public goods out of a sense of altruism, but as a way to project American power. Russia may be forced to pay the first high price, but the end result is that China and some of the other middle powers not yet committed to an American-led democratic community may begin to hedge their bets; continuing to use the U.S. dollar for its convenience and low cost, but creating alternative mechanisms to pivot as needed. When long-time U.S. partners like Saudi Arabia and Israel consider greater use of the renminbi, it suggests even friends will want to keep all options open.

The Ukraine crisis has shown that the strong consensus against the Russian invasion that characterizes North America, Europe, and East Asia does not extend to significant other parts of the globe. This is the environment in which the United States will need to operate moving forward: a transformative agenda to take the former partnerships and wield a tighter, more cohesive community that will exercise not only deterrent power against China and whatever level of power Russia retains, but also serve to attract the “neutrals” among the middle powers to more closely align to the United States than to Beijing. This is going to take sustained work across multiple administrations, and require a stable bipartisan consensus that this is in U.S. national interests. Ukraine has given Washington a chance to enhance and extend U.S. global leadership for the rest of this century. Is the U.S. national security and political system up to the challenge? I have my doubts.