Will a Weakened Russia Be More Dangerous? 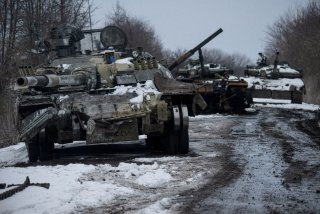 One of the most surprising aspects of the Russian war in Ukraine is that Russian forces have lost a huge amount of military equipment and men. The determination of the Ukrainian military, armed with Western weapons like the Javelin anti-tank missile, has deteriorated the Russian military and its ability to fight. In early August, the General Staff of the Armed Forces of Ukraine claimed that Russia has lost over 2,000 tanks and almost 49,000 soldiers since the war began. Ukraine further claims that it has destroyed 4,366 armored combat vehicles, 1,126 artillery units, 853 unmanned aerial vehicles, 234 aircraft, 205 helicopters, 15 ships and boats, 3,247 vehicles and fuel tankers, 198 cruise missiles, 289 air-defense systems, 105 pieces of special equipment, and 153 anti-aircraft warfare systems.

While Moscow disputes these numbers, even if they are somewhat inflated, Russian losses in Ukraine represent a massive loss of conventional military equipment that could affect the combat efficiency of the Russian military. Western intelligence agencies contend that Russia’s losses are “forcing Moscow to dip into stocks of older equipment, including decades-old T-62 tanks,” according to Bloomberg. While Western nations are supplying Ukraine with equipment and training Ukrainian forces, Russia’s losses have forced it to procure military supplies from smaller powers like Iran, North Korea, and Syria.

No matter the outcome of the war in Ukraine, based on these current losses (and projections of future losses), Russia will face a dilemma on how to re-equip, train, and utilize its military in the future. It will take years for Russia to rebuild its conventional military to pre-war levels. With this in mind, it is important to examine potential scenarios that the Russian military might face in that rebuilding period, as well as the pros and cons of each rearmament strategy.

In this scenario, the Russian military decides that it does not need to rebuild its forces due to economic or political reasons. Maybe the Putin government falls, and the new government does not want to reinvest in large-scale military rebuilding. Instead, the new post-Putin government wants to project an image of being non-interventionist, so it maintains the military at a post-Ukrainian war level. This scenario is probably the least likely to occur. Any internal threat to the Putin regime would probably come not from non-interventionists, but from an internal group whose main goal is to stop Putin’s current boondoggle while still maintaining a strong Russia. These internal enemies would most likely want to rebuild Russia’s military to at least the pre-war level, if not larger. Furthermore, while the United States wants a militarily weakened Russia, too weak of a Russia has the potential to cause instability along Russia’s borders and open even more opportunities for China to expand its sphere of influence, possibly making Russia a junior partner to China. Although a weaker Russian military does appear to be advantageous to the West, it also brings a degree of uncertainty that would result in NATO having to refocus its strategy on other parts of the globe.

Rebuild the Russian Military as Before

In this scenario, the Russian military will have learned no lessons from the invasion of Ukraine, leading it to rebuild its military as before, with pre-invasion levels or minor changes to the structure. Again, this scenario is not likely, as one would hope that a military would always be focused on learning lessons from conflicts, just as the United States and China are both studying the Russo-Ukrainian War. Moreover, George D. Foster, a professor at the National Defense University, contends that one of the main lessons to learn from the war is that “Old-War militaries are inherently ill-suited for the conditions and challenges of the 21st century.” And it is quite obvious that the Russian military is such an “old-war military.” Therefore, the Russian military could be expected to conduct numerous studies to see what went wrong, but the Russian political and military leadership could feel entrenched enough to conduct only minor or cosmetic changes to the Russian military.

Of course, one of the advantages of this scenario is that the Russian military-industrial complex would receive all of the contracts for the equipment, which could assist in the economic recovery of a country that has already faced immense economic challenges from the invasion. With current sanctions, it is not possible to legally obtain parts of many Russian high-tech weapons. If these sanctions continued, then the rebuilding would be further stalled. However, seeing the utter failures of Russian military equipment during current operations, this scenario would only further weaken Russia as a conventional military power in the long run. Rebuilding an army with sub-standard equipment that has failed on the battlefield will only result in future failures on the battlefield. Soldiers will not trust their equipment, and generals will not trust their forces. Moreover, nations will not be deterred by the Russian military, especially if they can field Western weapons, resulting in the potential for more conflicts.

Rebuild With Help From Allies

In this scenario, rather than relying on just the existing Russian military-industrial complex to rebuild the military, Russia teams up with its allies to rebuild the military (i.e., equipment and training recruits). Because of the failure of its weapons supply chain, Russia is already forced to purchase drones from Iran and artillery from North Korea to maintain its war effort. These partnerships will only strengthen the existing political ties between the nations and could lead Russia to acquire new weapons systems from them. However, this scenario will also take money out of the Russian economy and place it in the pockets of others. First, this goes against the graft system that has buttressed the ruling party in Russia since the fall of the Soviet Union.

Second, since Russia is worried about its appearance as a power on the world stage, having to partner with other nations to rebuild its military will make Russia appear to be a power in decline. While this scenario might not strengthen Russia’s place in the world, it would help these regional powers by bolstering Iran’s position as an arms dealer, one of Tehran’s recent goals, and getting more cash into North Korea. Of course, China is currently helping Russia’s war effort and has a history of cooperation with Moscow. Any future rebuilding of the Russian military with the help of allies would almost surely include Chinese assistance. This would again take money out of Russian pockets and put it in Chinese pockets, and it would most likely signal that Russia is becoming a junior partner in the relationship. So while we get a rebuilt Russia, it will owe its return to power to other nations.

Change Doctrine and Retool the Military

Seeing the failures in its efforts in Ukraine, the Russian military might totally re-tool its conventional force for the twenty-first-century battlefield. In this scenario, the Russian military takes its current doctrine and major weapons systems and throws them away. The Russian military will work to develop a new doctrine that addresses its failures on the battlefield. The new doctrine would then require re-equipping and training a new force, an approach similar to what the U.S. Army did (on a smaller scale) in the 1970s and 1980s with the introduction of the AirLand Battle Doctrine. The main problems with this scenario are that it might take a generation or more for the new Russian military to emerge from the ashes of the old one. During this time, Russia would have, at best, only a small military to project its power, which would not meet the needs of the current Russian grand strategy.

Second, the cost of developing new conventional weapons would be very high, especially since the Putin regime seems to be fixated on the development of hypersonic nuclear weapons. Third, this plan also goes against the Russian desire to save everything and never throw away any equipment. While it could attempt to sell the old weapons, they would probably not be worth much. Finally, the only way to re-introduce the new military to the world would be to conduct a massive military operation to prove its effectiveness, much like how Operation Desert Storm showed the effectiveness of the AirLand Battle.

This last scenario could also occur in tandem with any of the others. Weakened by its decimated conventional forces, Russia would have to rely more and more on its nuclear weapons, both tactical and strategic, for deterrence or as offensive weapons. Just as the Eisenhower administration relied on nuclear capabilities as part of the New Look strategy, a militarily weakened Russia would also need to “rely on nuclear weapons to deter … aggression or, if necessary, to fight a war.” A wounded Russia might lash out with a tactical nuclear strike, which it could see as the only way to protect itself. This reliance would only make the world a more dangerous place, with Russia lacking potential and having to rely only on nuclear weapons as a threat. This scenario would raise the specter of the use of tactical nuclear weapons on the battlefield in circumstances where Russia might have relied on hordes of tanks in the past.