Will Yemen Be Trump’s First Veto? 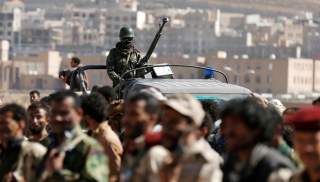 On Wednesday, the House of Representatives issued a stinging rebuke of the White House’s holding pattern in support of the Saudi coalition in Yemen. The vote was the culmination of multiple years of efforts by realists on Capitol Hill and their allies. House Joint Resolution 37 demands the removal U.S. Armed Forces from hostilities in or affecting Yemen within a month unless: Congress authorizes a later date, or issues a declaration of war, or specifically authorizes military force. The vote was not close: 248-177.

“The vote today is a step toward more sensible U.S. policy in Yemen and the Middle East, a welcome admonishment of Saudi Arabia, and an overdue assertion of nearly-dormant war powers. In each of those senses, though, more is needed,” says Benjamin H. Friedman of Defense Priorities.

A bipartisan cohort of rebels has been eager to use the first branch of government to force the White House’s hand, for much of the administration, and even before Donald Trump’s ascension to the presidency.

Rep. Ted Lieu, now an inveterate anti-Trumpist, told me in 2016: “The war in Yemen and the magnitude of atrocities [have been] occurring under Secretary of State John Kerry.” But Lieu noted any clamor to oppose a Democratic White House on the issue was muted. Friedman notes the widely-held contention in U.S. policy circles that Barack Obama’s White House assented to the Yemen escapades as a means of assuaging Riyadh following signage of the Iran deal: “The Obama administration erred in 2015 when it agreed to support the Saudi-led military intervention in Yemen's civil war. Their antagonists, the Houthis, do not threaten the United States.”

But Lieu and others’ isolation on the issue dissipated with the changing of the guard in 2017. And Obama’s former foreign-policy pointman, Ben Rhodes, has admitted that his team was in the wrong. Momentum on the matter actually went in the opposite direction, however, for a while, upon Trump’s inauguration. President Donald Trump swiftly owned the Saudi issue, and embraced the Kingdom of Saudi Arabia wholeheartedly. A senior administration official told me in 2017 that the United States backed the Saudis in the Middle East so fastidiously because “they approached us first,” during the presidential transition. “America First!” President Trump declared in an extraordinary 2018 statement. “The world is a very dangerous place! The country of Iran, as an example, is responsible for a bloody proxy war against Saudi Arabia in Yemen.”

The Saudi murder of journalist-activist Jamal Khashoggi late last year, of course—followed by Democratic seizure of the House—has now put the default U.S. position further on its back foot, however.

The House vote Wednesday is a watershed, and Senate ratification—albeit more narrowly—is expected. “We commend this bipartisan effort to end U.S. support for the Saudi-led coalition’s war in Yemen,” said William Ruger, vice president at the Charles Koch Institute. “Our country’s involvement in hostilities must be debated and authorized by the Congress. . . . For too long, presidents from both parties have ignored this most solemn provision of the Constitution, with far-reaching consequences for the country’s strategic interests.”

The question now, then, is essentially this: if the Senate does, indeed, back the resolution, then will Trump issue a veto—the first of his administration?

The White House did not respond to a request for comment. The administration-consulting Security Studies Group (SSG) weighed in Thursday against the move. “The war in Yemen is being fought by others, especially the Saudis and their allies in the Gulf Cooperation Council. America is merely providing supplies to our allies,” said Brad Patty of SSG. Patty said he did “not oppose Congress’ use of its war powers in principle. However, it is foolish in the extreme to elect to lose this particular fight.”

The president has a full plate: does he want to expend significant political capital to provide cover to his friends in Riyadh? The Kingdom of Saudi Arabia sure hopes so. Adel al-Jubeir, a longtime Saudi foreign affairs hand, appeared on the Sunday show circuit ahead of this week’s drama—and he pulled out all the stops. “We are fighting a war to prevent Yemen from being taken over by a terrorist organization allied with Iran,” Jubeir told Margaret Brennan of Face The Nation. “I find it very strange that members of Congress would try to curtail allies . . .  So, basically, what this legislation is doing is providing ammunition to the ‘Death to America’ crowd.”

The ball is in Trump’s court.