Wrong: Trump is Not An Isolationist 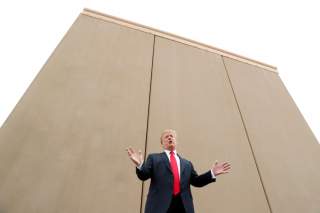 An increasingly popular accusation among members of the U.S. foreign-policy establishment and their allies in the news media is that Donald Trump’s administration is abandoning America’s global leadership role and placing the country into an isolationist cocoon. The latest proponent of that thesis is New York Times columnist David Brooks, who asserts flatly that “America is withdrawing from the world.” He adds that the negative results of that course “are there for all to see.” Brooks cites as examples China’s increasingly aggressive treatment of Hong Kong, a variety of Russian misdeeds, and Iran’s (but notably not Saudi Arabia’s or Israel’s) disruptive behavior in the Middle East. He contends that America’s alleged abandonment of the “liberal international order” will likely lead to even more widespread unfortunate consequences.

There are several problems with the argument that Brooks and his ideological brethren are propounding. First, the concept of a liberal international order is at best aspirational and at worst fictional. The reality is that it has been little more than a convenient façade for U.S. hegemony exercised through Washington’s network of military alliances and U.S.-dominated international political and economic institutions. The United States and its allies have routinely violated the supposed norms of a rules-based international order whenever such action seemed convenient.

Second, the notion that Trump’s foreign policy has been a dramatic departure from those of his predecessors since World War II is a myth. That is especially true regarding security issues. Although the president’s rhetoric toward Washington’s longtime allies has sometimes been abrasive and less collegial, his actions have differed little from the post–World War II norm. There certainly is no credible evidence that he is orchestrating a withdrawal from Washington’s multitude of global security commitments and initiatives.

Indeed, allegations of a retreat into isolationism are especially bizarre as America seems poised on the brink of war with Iran. And those making the “abandonment of global leadership,” “retreat from responsibility” and “embrace of isolationism” arguments have considerable difficulty citing concrete Trump administration actions that correspond to those cliches. Where, exactly, have such examples taken place?

Despite Trump’s rhetoric in the 2016 election campaign that the U.S. intervention in Afghanistan should be terminated, he promptly reneged on that position, and Washington’s war in that country goes on with no apparent end in sight. Likewise, the United States maintains a military presence in Syria and still pursues the increasingly quixotic effort to unseat Bashar al-Assad’s government. Indeed, U.S. military action escalated, with air and missile strikes on Syrian government forces.

Nor has Trump terminated the Obama administration’s policy of making the United States an accomplice in the Saudi-led war in Yemen, despite the proliferation of war crimes by Washington’s allies. Indeed, overall ties with Riyadh have expanded under Trump, and the president vetoed a congressional measure terminating U.S. involvement in the coalition’s Yemen war effort. Even more worrisome, the Trump administration has ratcheted-up its confrontational policy toward Iran. One will look in vain for any signs of a U.S. “retreat” in the Middle East.

Furthermore, allegations of withdrawal have no greater validity regarding U.S. security behavior in East Asia. The U.S. Navy has increased its “freedom of navigation” patrols throughout the South China Sea during the Trump years, despite Beijing’s vehement complaints. Washington’s support for Taiwan has grown rather than diminished. Trump eagerly signed the new Taiwan Travel Act, which for the first time authorized meetings between high-level U.S. and Taiwanese officials. In May, the administration implemented that provision with a meeting between National Security Adviser John Bolton and his Taiwanese counterpart.

Trump also has gone out of his way to stress that Washington’s ties with Japan, America’s principal ally in East Asia, remain as strong as ever. And although there have been some differences with South Korea about policy toward North Korea, there are no signs that the United States is about to downgrade, much less terminate, its military alliance with Seoul. So, again, where is the substantive evidence of U.S. retreat or abandonment?

Such evidence also is lacking with respect to Washington’s relations with the North Atlantic Treaty Organization countries. During the 2016 campaign, Trump did call NATO “obsolete,” and he raised doubts about whether he embraced the North Atlantic Treaty’s Article 5 commitment that an attack on one member would be treated as an attack on all. But once in office, he and his associates quickly reversed course. Trump’s annoyance with the allies now is largely confined to traditional burden-sharing complaints.

Meanwhile, other U.S. actions indicate that Washington’s security policy in Europe is as active as ever. Contrary to the myth Trump’s domestic critics foster that he is willing to “do Putin’s bidding,” administration actions point unmistakably to the opposite conclusion.

Washington has supported expanding rather than contracting NATO, backing Montenegro and Macedonia as new members. U.S. forces have joined in an accelerating number of NATO military exercises in Eastern Europe and the Black Sea. Additionally, the Trump administration is now in negotiations to build a permanent base in Poland. Moreover, contrary to assertions that Trump seeks to appease Russia, the United States has been training Ukrainian troops and has concluded not one, but two, arms sales to Kyiv. That is curious behavior for an administration determined to conduct a policy of retreat from Europe.

The theory that Washington is relinquishing its global leadership role on non-military matters is not quite as absurd, but only marginally so. The Trump administration’s repudiation of the Trans-Pacific Partnership did herald a narrower, nationalistic orientation on trade issues. So, too, have Trump’s bilateral trade feuds with Canada, Mexico, and China. Nevertheless, there is scant evidence that U.S. officials want America to be less involved in global commerce. Instead, they seem to be angling for trade on better terms for U.S. producers. The wisdom of that strategy is certainly questionable, but the approach is still a far cry from succumbing to isolationism.

When pressed, Trump’s critics scramble to point out actions such as his decision to end U.S. adherence to the Paris climate accord—an agreement that the Obama administration never even submitted to the Senate for ratification. Such examples smack of desperation. An unwillingness to endorse a largely symbolic, unenforceable measure reflecting hysteria on climate change is hardly credible evidence of a U.S. retreat from global leadership.

It actually would be gratifying if Trump’s critics were right. Terminating crusading follies such as the interventions in Afghanistan and Syria would be a good development, not a bad one. So, too, would be a willingness to reassess NATO, an alliance created seven decades ago under vastly different global conditions to wage the Cold War against the Soviet Union. Likewise, it would be worthwhile to conduct a sober risk-benefit analysis regarding the U.S. defense commitments to Taiwan and South Korea, given that the risk level in both cases is rising rapidly.

Unfortunately, despite the hostile propaganda that Trump’s opponents continue to circulate, there are no signs that he is even considering, much less executing, a badly needed retrenchment in America’s global obligations.