Xi Jinping: An Echo of Saddam? 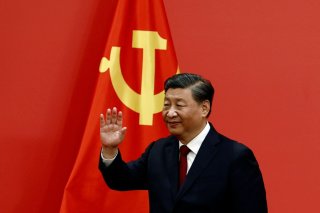 Xi Jinping’s consolidation of power at the recent Communist Party congress in Beijing was accomplished with a Shakespearean twist. Xi’s predecessor as president, Hu Jintao, seated next to Xi, appeared to be forcibly removed from the closing session of the congress by two attendants before the television cameras. Hu had presided over a comparatively open and prosperous political and economic system, when U.S.-China relations seemed stable and improvable. While there may be a mundane explanation for Hu’s removal from the congress, such as a health scare, given the perfectionist choreography of these events, chances are that Xi himself had ordered Hu’s public humiliation.

It recalled to my mind another such humiliation, albeit far more brutal. On July 22, 1979, six days after officially replacing Ahmed Hassan al-Bakr as president of Iraq, Saddam Hussein convened a meeting of Baath Socialist party leaders which he ordered videotaped and which is available on YouTube. Seated on stage, Saddam announced that sixty-six party leaders had been uncovered as traitors and comprised a fifth column. As each name was read out, guards grabbed a baffled man from his seat in the audience and forced him out of the auditorium. At the end of this process, those still seated, white with both fear and relief, spontaneously leaped to their feet shouting undying loyalty to Saddam. Of the sixty-six named, twenty-two were quickly ordered executed by firing squads. Wider purges followed that autumn. The country now was literally Saddam’s. He had achieved total fear.

Saddam’s consolidation of power was little noted in the newspapers of the day, as he was then seen as just another dull Arab dictator. But that Baath party meeting in which he had his imagined rivals removed from the hall was the prelude for everything that followed: the killing of an estimated 250,000 of his countrymen in the course of his quarter-century-long rule; his 1980 invasion of the oil-rich Iranian province of Khuzestan which ignited the Iran-Iraq War, thus causing hundreds of thousands of more deaths; his invasion of Kuwait in 1990 which led to the First Gulf War; and his failure to open Iraq to proper UN weapons inspections that helped lead to the Second Gulf War, killing hundreds of thousands more, including several thousand Americans. It had all begun when a group of men was forcibly removed from a public meeting. That was the precise moment that signaled Saddam’s literal ownership of the Baath party and thus his country. The public humiliation and subsequent destruction of fellow party members were crucial to his mystique of power.

The differences between Xi and Saddam are extreme. Xi is a university-educated princeling who rose through the ranks of a highly institutionalized Communist apparatus of what is now the world’s second-largest economy. Saddam was a tribal thug from what had been a backwater of the Ottoman Empire. Xi had one man removed from a hall; Saddam had dozens removed and executed.

But there is an echo here. For both men, absolute power was not enough. Someone had to be publicly humiliated in a dramatic fashion in order to drive the point home. Anyone who challenges me will be destroyed. In both cases, it is where abject cynicism merges with Leninist ideology, since the Baath movement in the Levant was an offshoot of Communism.

Saddam went forward from that party meeting to define one of the bloodiest eras in Middle East history. But compared to Xi’s potential to wreak international havoc, Saddam may have been only a warm-up act. The United States miscalculated in Iraq and suffered immeasurably. Yet the Iraq War, like the Vietnam War, did not derail the United States from its geopolitical trajectory. The United States is still the world’s preeminent military and economic power. But China is very different from Iraq, even as Xi in his own far more sophisticated way is just as aggressive as Saddam regarding his regional and global ambitions. The stakes not only for Taiwan and our other Asian allies but for the world at large, cannot be exaggerated. We can’t afford any miscalculations in Asia like we made in the Middle East. Few paid attention when Saddam secured his grip on the Baath party. But now no one can say we haven’t been warned. Ask Hu Jintao.

Robert D. Kaplan holds the Robert Strausz-Hupé Chair in Geopolitics at the Foreign Policy Research Institute. He is the author of The Tragic Mind: Fear, Fate, and the Burden of Power, forthcoming in January.