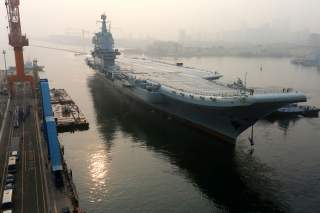 People’s Republic of China (PRC) government-affiliated academic Hu Bo published an essay entitled “No One Lost the South China Sea (And No One Will)” in The National Interest on August 20. That article makes a relatively sophisticated defense of Beijing’s agenda in this maritime territorial dispute. Nevertheless, the case Hu makes is unbalanced and requires a critical response.

Hu says “there is no choice but to establish a common and inclusive security order” in the South China Sea. This is contrary to current PRC policy, which features a strong push to unilaterally consolidate claims that grant China exclusive privileges, not a movement toward a “common and inclusive security order.” Indeed, Beijing has long demanded that any negotiated settlement of the South China Sea dispute must take the form of separate bilateral talks between China and each of the other claimants (Vietnam, the Philippines, Malaysia, Brunei, and Taiwan; Chinese claims may also encompass Indonesia’s Natuna Islands). This is presumably to maximize Chinese leverage over invariably weaker partners. Beijing is also apparently working with ASEAN on a Code of Conduct, but this is much less likely a harbinger of Chinese concessions than another exercise in window-dressing, like the 2002 agreement between China and ASEAN.

Hu asserts that “no matter how far China develops, it is not likely to pursue so-called “`maritime hegemony’” because no country can “control” or “achieve predominance in the South China Sea.” Here, as well, Hu’s assessment is at odds with PRC policy. China’s agenda is clearly aimed at achieving some level of control over the areas of the South China encompassed by the nine-dashed line (i.e., about 90 percent of the South China Sea, plus all the “islands,” rocks, sandbars and reefs within that space).

Through both official statements and the actions of military and para-military units, Beijing has asserted two clear principles: (1) nationals from countries other than China are not allowed to take resources from the sea or seabed within this area without PRC assent; and (2) China has the right to close areas within this space to foreign commercial and military activities at will.

Examples of this include the annual Beijing-proclaimed fishing ban and the announced closure of part of the sea while the PLA Navy was conducting sea trials for the aircraft carrier Liaoning (leading to the USS Cowpens incident in 2013). Moreover, Chinese government vessels have repeatedly sought to enforce those principles through maritime hooliganism, including ramming or threatening to ram foreign vessels. The manifest PRC objectives of establishing ownership over resources and veto power over foreign activity in the area is a fair definition of “maritime hegemony.”

Hu argues "there is no problem with the freedom of navigation in the South China Sea." Hu is correct if "freedom of navigation" refers only to foreign commercial shipping passing through the South China Sea. The U.S. Navy's definition of "freedom of navigation," however, includes the ability of U.S. military ships and aircraft to operate unimpeded in the areas defined as international sea and airspace by international law. The U.S. Navy assiduously abides by the guidelines of the Law of the Sea—for example, surveilling China from within China's exclusive economic zone, which is allowed, but not from within China's territorial waters, which is not permitted. Chinese ships sometimes surveil U.S. Navy activity near Hawaii, and the U.S. government makes no fuss.

So the real issue here is that China chafes at America playing regional policeman, which is part of America’s grand strategy. Hu makes an oblique reference to this: “the United States has not recognized the strategic significance of the changing balance of power in China’s favor”—i.e., America should yield strategic pre-eminence in Asia to China. That the Chinese feel this way is understandable. One hopes the two countries can work out a better solution to this problem than reckless and dangerous maneuvering by Chinese ships and aircraft.

Up to now, Chinese harassment has been focused on foreign vessels taking or preparing to take resources from the sea or seabed and foreign ships trying to prevent Chinese from taking resources. Beijing has also targeted its harassment on any foreign military presence. There is no guarantee, however, that once Beijing secured international recognition of the South China Sea as Chinese territory, Beijing would not assert to the right selectively block the seaborne commerce of particular countries with which Beijing has political disagreements.

I disagree with Hu on a fundamental issue—I assert that Beijing is attempting to establish a sphere of influence in the South China Sea. This is not particularly nefarious. It is normal great-power behavior, and China clearly sees itself as the re-emerging and rightful great power of eastern Asia. Characteristic of the Chinese Communist Party (CCP), however, Beijing consistently insists that China is not acting like a normal great power, and specifically that “China will never seek expansion, hegemony or sphere of influence,” now a mantra of the Xi Jinping government. Echoing PRC propaganda, Hu says that any talk to the contrary is “a rumor and excuse to create panic and pressure on China.”

Hu repeats the Chinese government position that China is not “expansionist” but merely responds to the intrusions of other countries, and specifically that China’s hand is forced by “U.S. provocative actions such as FONOPs [Freedom of Navigation Patrols].” The question here is whether China is merely reactive, or is using the actions of others as an excuse to implement or accelerate Beijing’s own predetermined plans. These alternatives are not mutually exclusive. Perceived foreign challenges can affect China’s tactics and timetable, and blaming foreign “provocations” makes China appear less aggressive.

But some Chinese actions certainly seem disproportionate as mere "responses," such as the pitched smokeless naval battle with Vietnamese boats that China instigated by moving a large floating oil rig in 2014. Additionally, China has built military bases in the middle of the South China Sea on over 3,000 acres of reclaimed land, massively more than the construction work of all the other claimants combined. Hu's claim that a U.S. destroyer occasionally sailing near a Chinese-claimed rock or reef is "a huge threat to the sovereignty and security of China and Chinese people on these islands and reefs" is hyperbolic to the point of absurdity. This example shows the essence of Beijing's argument that FONOPs caused China to build the military bases, rather than the reverse.

A fundamental issue Hu doesn't deal with is whether it is reasonable that China should claim ownership over the Sea China Sea because ancient Chinese mariners sailed through it, despite the fact that China signed an international treaty in which it discarded its "historic rights" as a basis for ownership.

Hu's article demonstrates how discussions of the South China Sea are a detached parlor game unless they deal with the driving issues of China's desire for a sphere of influence and U.S.-China hegemonic rivalry. Hu also reminds us of how CCP political correctness hampers that discussion.