When Camelot Went to Japan THE UNITED States has security partnerships with numerous countries whose people detest America. The United States and Pakistan wrangled for seven months over a U.S. apology for the NATO air strikes that killed twenty-four Pakistani soldiers in 2011. The accompanying protests that roiled Islamabad, Karachi and other cities are a staple of the two countries’ fraught relationship. Similarly, American relations with Afghanistan repeatedly descended into turmoil last year as Afghans expressed outrage at Koran burnings by U.S. personnel through riots and killings. “Green on blue” attacks—Afghan killings of U.S. soldiers—plague the alliance. In many Islamic countries, polls reflect little warmth toward Americans.

Washington’s strategy of aligning with governments, rather than peoples, blew up in Egypt and could blow up in Pakistan, Saudi Arabia, Bahrain and Yemen. America’s alliances in the Middle East and Persian Gulf are fraught with distrust, dislike and frequent crisis. Is there any hope for them?

Turns out, there is. Fifty years ago, a different alliance was rocked by crisis and heading toward demise. Like many contemporary U.S. alliances, it had been created as a marriage of convenience between Washington and a narrow segment of elites, and it was viewed with distrust by the peoples of both countries. Yet a half century later, that pairing is one of the strongest security partnerships in the world—the alliance between the United States and Japan.

But in 1960, thousands of Japanese people poured into the streets of Tokyo to protest their country’s relationship with the United States. This shocked leaders on both sides of the Pacific, who realized that they had to take action or their partnership would die. Japanese officials crafted initiatives designed to build support for the alliance among the Japanese public. These included plans for the first U.S. presidential visit to Japan. In America, the incoming John F. Kennedy administration—fearing it could lose the linchpin of its strategy in the Pacific—supported the idea. It also made an unconventional (and in retrospect, deeply consequential) choice in its ambassador to Tokyo—Harvard professor Edwin O. Reischauer. In advance of his Japan trip, Kennedy sent his brother, Attorney General Robert Kennedy, to Tokyo. The president was assassinated before he could make the trip, but Robert Kennedy’s visit, and the networks and institutions it created, helped knit the U.S. and Japanese societies closer together. Two countries once dismissed as impossible allies forged, through careful and persistent diplomacy, a durable and warm relationship.

IN THE late 1950s, prior to Kennedy’s election, Japan’s people, flushed with national pride about their country’s extraordinary economic miracle, increasingly resented the U.S.-Japanese relationship. The two countries remained in the roles of conqueror and conquered. The U.S.-Japanese security treaty allowed the Americans to project force from Japan at will, and even empowered the U.S. military to subdue internal unrest. Furthermore, the Japanese, intensely protective of their nascent democracy, recoiled at Washington’s support for Japan’s anti-Communist stalwarts—Liberal Democratic Party (LDP) leaders such as the hawkish prime minister Nobusuke Kishi, who had been a member of Japan’s wartime cabinet and was widely perceived as disturbingly nostalgic for the imperial era.

The Japanese also fumed over the continued U.S. administration of Okinawa, where America had seized land for military bases and a neocolonial paradise of compounds and manicured golf courses. As the Cold War intensified, the Japanese worried that those bases would draw them into a nuclear war with the Soviet Union or China. Then, in the thick of the 1960 debate over renewing the U.S.-Japanese security treaty, the Soviets shot down Francis Gary Powers’s U-2 spy plane, and Moscow and Beijing bellowed threats against countries allowing U.S. air bases on their territory. As scholar Kanichi Fukuda wrote at the time, suddenly “the new security pact [became] a matter of grave concern to the man in the street.”

Kishi was only able to pass treaty ratification by ramming it through the Japanese Diet after forcibly removing opposition politicians from the building. His citizens, already suspicious toward his leadership, roared at this betrayal of their young democracy. Demonstrators filled Tokyo’s streets and strained against the Diet’s gates. The following month, when a U.S. official arrived to plan a forthcoming visit by President Dwight Eisenhower, protestors surrounded his car and forced his evacuation by helicopter. Eisenhower’s visit—set to be the first by a U.S. president to Japan—was cancelled out of concerns for his safety. Americans suddenly realized that their alliance with Japan, called by one Japanese leader an “unsinkable aircraft carrier” floating off of the coast of the USSR, was foundering.

Dumbfounded American leaders gaped at the newspaper headlines and TV footage of their angry ally. What the hell was happening in Japan? Harvard’s Reischauer provided an answer in the pages of Foreign Affairs. “Never since the end of the war,” wrote the historian in the magazine’s October 1960 issue, “has the gap in understanding between Americans and Japanese been wider.” In his article, titled “The Broken Dialogue with Japan,” Reischauer lambasted the U.S. “occupation mentality” and urged the United States to change its attitudes and policies to avoid losing the alliance. He said most demonstrators “wanted the treaty killed and the present military link with the United States, together with the existing American bases in Japan, either eliminated at once or else ended in stages.” He cautioned that the issue of American control of Okinawa could someday break the alliance.

An interested reader of Reischauer’s diagnosis was John Kennedy, who upon becoming president tapped the scholar to be ambassador to Japan. Reischauer had no diplomatic experience, but he had been born in Japan, spoke the language and was a renowned expert on the country. Besides, he had an accomplished Japanese wife. Upon arriving in Japan, Edwin and Haru Reischauer immediately became a media sensation. The ambassador proclaimed his aim to allay the “serious misapprehensions, suspicions, and lingering popular prejudices” between the two peoples.

The Reischauers transformed what had been an isolated and imperious U.S. embassy. The ambassador recruited staff who understood the language and culture, promoting language training among embassy staff and families. The previous ambassador, Douglas MacArthur II, had not encouraged Japanese language study: “MacArthur was of the old school,” remembers Ernest Young, Reischauer’s special assistant. “There was French, and everything else meant going native. He thought that it was better not to know the local language.”

The Reischauers also fostered lectures and talks in coffee klatches and meals in which U.S. expatriates—businessmen and their families, military officers and wives, journalists and intellectuals—were educated about Japan. He wanted to show Japan as a nation “with a history and culture worthy of respect and study.” Reischauer cultivated relations with the U.S. military through repeated visits to Okinawa.

The “Reischauer line,” as it came to be known, advanced the idea of an “equal partnership.” The ambassador sought to convince the Japanese that Americans were not reckless militarists but rather prudent global players responding to dangerous threats; he sought to convince the Americans that Japan was an important ally deserving of respect and an equal voice. A true partnership, Reischauer believed, meant eliminating the vestiges of occupation, which meant returning Okinawa (and other seized Ryukyu Islands) to Japan. Reischauer criticized the U.S. high commissioner in Okinawa, Lieutenant General Paul Caraway, as running a “military dictatorship,” saying he was “doing everything to infuriate the local population and therefore exacerbate the situation without realizing the terrible mistakes he was making.” Okinawa was run, agreed Ernest Young, “like a colony.”

Caraway and others in United States Forces Japan viewed control over Okinawa as essential for U.S. power projection in the Pacific. But Reischauer argued that the best way to maintain a presence in Okinawa would be to return it to Japan. “Sooner or later,” he wrote, the Japanese “would get excited over Okinawa as an irredenta and this might ruin the whole Japanese-American relationship.” In recent Japanese elections, the Socialists had campaigned aggressively on this issue. As Young later explained, “If we were interested in keeping the LDP in power in Japan, we had to do something about Okinawa.”

But, as the security-treaty crisis showed, the future of the U.S.-Japanese alliance depended not only on the LDP but also on the support of the Japanese people. As George Packard (Reischauer’s assistant and later his biographer) wrote, the security-treaty crisis showed that “this support could not be taken for granted; it had to be earned.” Ties between the two peoples had to be established in order to convince the Japanese that this was a relationship not of domination but of partnership and respect.

As Reischauer sought to repair the frayed relationship, momentum grew for a U.S. presidential visit to Japan. Gunji Hosono, an elderly professor whom John F. Kennedy had befriended in 1951 while touring Japan, held meetings with the president, Reischauer and Robert Kennedy to discuss the possibility. Hosono had tracked down the captain of the Japanese destroyer Amagiri, which had sunk John Kennedy’s PT-109 boat in the Solomon Sea in 1943. Kennedy, who led his crew to rescue and saved an injured man, won a Purple Heart and the Navy and Marine Corps Medal for his heroism. When Kennedy ran for the U.S. Senate in 1952, Hosono arranged for the Amagiri’s captain, Kohei Hanami, to write a letter to Kennedy (much publicized during the campaign), in which he conveyed his “profound respect to your daring and courageous action in this battle.” The Kennedys invited Hosono to attend Kennedy’s presidential inauguration as an honored guest, along with his daughter, Haruko. Hosono presented the president with a ceremonial scroll bearing the signatures of the Amagiri’s crew. 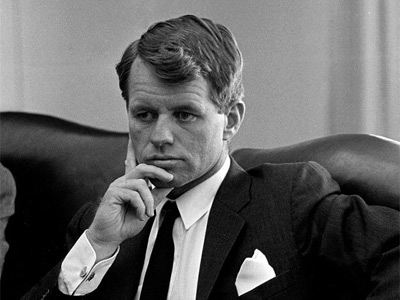 Pullquote: After Robert Kennedy's visit, the RK committee grew into a number of activities and institutions designed to foster an alliance between peoples rather than between governments.Essay Types: Essay