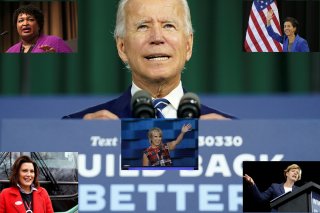 Presumptive Democratic nominee Joe Biden's marked deadline to choose his running mate is looming large and the party still remains unsure of who will get to be his vice-president.

With the economy taking a downturn and coronavirus swiping through the U.S.--with total case numbers rising fast--Biden’s pick for VP has been in the talks in a number of media outlets, but there’s been no significant or official indication of who it’ll be.

Biden said he’d pick a woman as his running mate in March, and Democratic poll participants have said they’d like to see a woman of color on the presidential ticket.

As the elections are less than four months away, these are five VP candidates that Biden should avoid, in no specific order, to secure the presidency in November.

The former top Democrat in the Georgia House, Stacy Abrams, has made it publicly known that she’d be an “excellent” candidate for Biden’s vice-presidential pick. In the midst of the coronavirus pandemic, she’s rallied attention all over the media - The New York Times, The Washington Post, NBC’s “Meet the Press” - and she’s advocated for her own candidacy in “what’s usually a behind-the-scenes job search,” according to USA TODAY.

“I would be an excellent running mate. I have the capacity to attract voters by motivating typically ignored communities. I have a strong history of executive and management experience in the private, public, and nonprofit sectors. I’ve spent 25 years in an independent study of foreign policy. I am ready to help advance an agenda of restoring America’s place in the world. If I am selected, I am prepared and excited to serve,” Abrams told Elle magazine.

The former Georgia gubernatorial candidate also doesn’t have much, or any, federal experience, which could put her at a disadvantage if granted the vice presidential pick.

One of the only reasons Biden would pick her to battle center-stage with President Donald Trump and Vice President Mike Pence, is to rack up votes in her state. But, Atlanta Mayor Keisha Lance Bottoms would likely be a stronger choice for VP because of her handling of the coronavirus and protests after the killing of George Floyd.

Baldwin, a “solid progressive” and the “fourth-most liberal member of the Senate,” according to The Washington Post, would be the first LGBT VP, if chosen by Biden.

“Were he to ask me to be his vice president, I would surely say yes,” Baldwin told a local NBC affiliate in June. “But I will keep my conversations in confidence. We just need to win.”

Although she’s served in office for nearly all of her adult life and could be a strong running mate, she isn’t a woman of color. Nearly 72 percent of Democrats in a USA TODAY/Suffolk Poll taken in June said it was “very” or “somewhat important” that the VP pick is a woman of color.

Participants in the poll said the pick “definitely needs to be a woman of color to be representative of what’s happening right now.” If Biden selected her, he’ll likely see less support despite her political experience and progressive beliefs.

The first-term Michigan governor has seen the national spotlight during the coronavirus pandemic - attention that could actually hurt her candidacy as VP.

Despite bringing youth to Biden’s presidential ticket, Whitmer recently wrote an editorial piece in the New York Times that called on Trump to issue a federal mask mandate.

“We are now working around the clock to restart our economy in a way that protects workers, businesses and families. But as people in Michigan and across the country begin to return to work, cases are rising again. To slow the rise and further protect our families from this virus, we need the Trump administration to issue a federal mask mandate,” Whitmer wrote.

The governor also condemned the Trump Administration for failing to supply needed medical equipment and protective gear, a push that caused protests outside the state capitol in April, advocating to terminate stay-at-home orders. Democrats are often wary to pick a governor as VP because of their past decisions while in office.

Whitmer is also deemed to be a moderate Democrat, which will likely not attract progressives to Biden’s campaign.

The New Mexico governor is one of the most “unpopular governors,” according to Taos News due to her progressive stances on gun control and abortion in a highly conservative state.

Lujan Grisham expanded background checks for gun sales and signed a “red-flag gun bill,” noting that sheriffs “should resign as a law enforcement officer and leader in that community” if they don’t implement the policy change.

In a survey conducted by Morning Consult last year, nearly 43 percent of participants disapproved of Lujan Grisham’s job as governor.

The Rhode Island governor has been praised for her handling of the coronavirus pandemic in recent months, but her candidacy as VP hasn’t been in the talks that much.

Prior to the virus, the second-term Democrat received a 55 percent disapproval rating, marking her as one of the least popular governors in the U.S., according to The Boston Globe.

Although she is one of the only potential candidates with gubernatorial experience, she isn’t a woman of color - a factor that Democrats have emphasized in the polls as important.