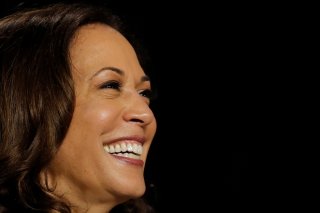 Kamala Harris made history when she became Joe Biden's running mate, as the New York Times was quick to point out on its front page. The junior senator from California is both the first black woman and the first Asian-American to occupy either spot on a major party ticket. Should the Democrats prevail in November, Harris is well-positioned to keep making history.

As vice president under the first 78-year-old president of the United States — Ronald Reagan left office after his second term less than a month away from this milestone while a reelected President Donald Trump would only reach this age in the final year of his second term — Harris would have a good chance to sit in the Oval Office herself. Even a successful and popular President Biden may only serve a single term, automatically making Harris the 2024 Democratic frontrunner. And a morbid glance at the actuarial tables suggests other less pleasant scenarios by which Harris could already be the incumbent president by that time.

Harris will, therefore, leave the Democratic National Convention, such as it is, with the best opportunity to break the most elusive glass ceiling in American politics since Hillary Clinton. Fairly or not, it is Hillary to whom she will frequently be compared.

Because of Biden's advanced age, Harris, aspiring to be a heartbeat away from the presidency, is even fairer game than a typical major-party vice presidential nominee. Trump is running against her at least as much as against Biden. The experience may test some of Hillary's (hopefully non-Russia-related) theories about why she lost in 2016.

Even though Biden is guilty of most of the same establishment sins as Clinton — probably more, since he has was in the Senate for 36 years before his two terms as vice president — Trump hasn't had the same success defining him as a corrupt D.C. insider who should horrify conservatives, blue-collar swing voters and progressive change agents alike. Part of that is because Trump is an incumbent and conditions in the country are objectively not good, however you wish to assign blame.

But it's also true that people disliked Hillary — in the case of conservatives, for 25 years before she won the Democratic presidential nomination — to a degree that is simply not true of Biden. Unlike Trump, Sleepy Joe inspires little passion either way. In 2020, that's a good thing.

Harris is newer to national life than Biden or either of the 2016 combatants. But she possesses qualities — a strong personality, a prosecutor's polemical skills, unmistakable ambition — that seem likely to endear her to some voters while inspiring less positive emotions in others. Trump has already called her "nasty." For college-educated suburban women already turned off by the president, that could become a badge of honor. Elizabeth Warren's "Nevertheless, she persisted," after all, briefly became the political equivalent of "Yass queen."

At the same time, Harris irritated conservatives during Supreme Court Justice Brett Kavanaugh's confirmation hearings (a fact Trump wasted no time bringing up). Perhaps more concerning, she did not wear well in the Democratic debates. She briefly threatened Biden and then quickliy receded. Some progressives found her phony, which not coincidentally is the adjective in her Trump world nickname: "Phony Kamala."

It would be inaccurate to compare Kamala too closely to Hillary, just because she is assertive, ambitious, a lawyer and likely not a big Tulsi Gabbard fan. Harris has more natural political talent and can turn on the charm far more convincingly when she wants to. She was never married to a sitting president. Maybe she will soon be able to add "Can beat Donald Trump" to this list of distinctions.

Nevertheless, if Trump is going to drive up somebody's negatives by Election Day, Harris seems like the place to start. Even getting people to talk about the Democratic ticket rather than the just the incumbent during a pandemic would improve Trump's chances. He may fail and look like a misogynistic jerk for trying. But that is how he is going to be painted anyway.

"Trump's strategy, just like in 2016, will be to lie, spew hate, spread disinformation, and work to inflame the worst instincts in his base in order to stop a powerful, prepared leader like Sen. Harris from helping to defeat him. But we won't let him get away with it," says a fundraising email from MoveOn.org. "Together, we must tell Trump and his racist, sexist allies that we have Sen. Harris's back."

If Trump can't get the vast right-wing conspiracy band back together to play the anti-Hillary greatest hits against Harris, we'll be moving on from him soon enough.