Donald Trump vs. Bill Clinton: A Tale of Two Impeachments 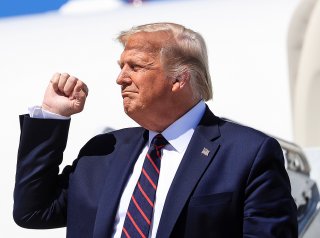 Bill Clinton’s return to a Democratic National Committee caused a stir even before the speech.

Then the 42nd president opined, “if you want a president who defines the job as spending hours a day watching TV and zapping people on social media, he's your man,” which only reminded many Americans of Clinton’s own less-than-desirable extracurricular conduct in the Oval Office.

Ahead of the speech, even liberal outlets like Slate opposed Clinton’s speaking role. Democratic politicians and liberal commentators didn’t even bother to muster up much of a defense, saying the Democratic Party is a “big tent” and his conduct was a long time ago.

Bill Clinton’s albeit a diminished role at the virtual convention was further puzzling given that so many convention speakers seem to frame the election as one to purge the White House of Donald Trump’s taint of indecency—not so different from the point that Republicans sought to make in the 1990s against Clinton.

Clinton and Trump garnered enough animosity from the opposition party to be the second and third impeached presidents in American history to be impeached by the House of Representatives. Unlike the first presidential impeachment of Andrew Johnson—acquitted by just one vote in a Senate trial—there was never a realistic chance that either Clinton or Trump would be removed. My new book, “Abuse of Power,” delves into the parallels and differences, in giving broader historical context behind the story of the Trump impeachment.

In light of the #MeToo movement just a couple of years ago, many progressives seemed to be taking another look at the Clinton impeachment. Ezra Klein and Rachel Maddow said Clinton should have resigned from office over the affair with White House intern Monica Lewinsky, recognizing a vast power disparity between a president and an intern even if the relationship was consensual.

Clinton wasn’t impeached for the affair but for perjury and obstruction of justice in trying to cover it up. Still, Republicans insisted character should count in a president, while Democrats consistently argued the impeachment was about Clinton’s personal life and an outrage.

At this year’s Senate impeachment trial, New York Rep. Hakeem Jeffries--the best orator of the House managers and a member of the party that rolled its eyes at the character issue two decades ago--argued Trump’s presidency and his conduct, is “an extraordinary attack on our character” as a country. The House had impeached Trump for abuse of power and obstruction of Congress.

The Senate determined in 1999 that impeachment charges tied to sex in the Oval Office and in 2020 to an imperfect phone call with a foreign leader didn’t quite meet the standard for removing an elected president regardless of how House impeachment managers tried to frame the argument as a battle for the republic.

It’s almost astonishing that Trump was impeached on Dec. 18, 2019, almost exactly twenty-one years after the House impeached Clinton on Dec. 19, 1998. And Ken Starr would play a role in both, as an independent counsel in 1998 and as one of the president’s lawyers in 2020.

Perhaps a more substantive matter Clinton and Trump had in common is that their impeachments were prefaced by several THIS-IS-IT moments when the opposition party was certain a particular scandal would be the president’s undoing. Trump critics today think him to be too indecent, petulant and unsophisticated to be president. Two decades ago, critics of the first baby boomer president saw a draft-dodging, womanizing, scandal-plagued reprobate who was beneath the office.

As the book says, the Lewinsky matter, “came after a string of Clinton scandals that includes the shady Whitewater land deal, campaign donations from China, and obtaining FBI files of political enemies, among others. He seemed to get away with those.”

“Similarly, Democrats might well have felt that Mueller dropped the ball and that Trump got away with something in the Russia scandal,” the book continues. “Then there were a host of other things non-Mueller-related that Democrats were eager to impeach over,” such as emoluments and Stormy Daniels.

“The Republican majority is not judging our president with fairness but impeaching him with a vengeance,” Pelosi said in 1998. “We are here today because the Republicans in the House are paralyzed with hatred of President Clinton; and until the Republicans free themselves of this hatred, our country will suffer.”

There is one massive difference.

Clinton paid a price beyond the legacy of impeachment. He was found in civil contempt of a federal court. He paid a $90,000 fine, and was made to surrender his law license as part of a deal to avoid potential prosecution after leaving office.

While some Democrats have indicated they want to prosecute Trump for something after he’s out of office, it almost certainly won’t be for the Ukraine phone call.

Trump’s call to Ukrainian President Volodymyr Zelensky, in which the two leaders discussed Joe Biden, Hunter Biden, investigations of CrowdStrike, military aide and a White House visit, wasn’t a “perfect call.” But, the impeachment was based on presuming motives.

Democrats first called this a quid pro quo, then bribery, then extortion and didn’t make a convincing sell, so opted for two non-crimes—reducing a presidential impeachment toa squabble between the executive and legislative branches.

The difference was notable, said Robert Ray, the former independent counsel who secured the plea deal with Clinton, and then served on the Trump defense team in the Senate trial.

“In the case of Clinton, no one questioned whether crimes were committed. The question was whether they were high crimes,” Ray told me in an interview for the book. “In this case, the House of Representatives argued there was no need for an actual crime. But, in their view, an abuse of trust was grounds for impeachment. The constitution doesn’t stipulate a crime, but that has been the tradition. The House managers argued that only an abuse of office was required. That was counter to the historical practice of the impeachment of Clinton, what would have been the impeachment of Nixon, and the impeachment of Johnson.”

The impeachment of Andrew Johnson for violating the Tenure of Office Act is often frowned on, since the law was eventually overturned. But, even here, the House impeached the president for violating what was at the time a duly enacted law.

The Trump process was the shortest impeachment process of any president in history, 98 days from the formal House vote to start an impeachment inquiry on Oct. 31, 2019 to his Senate acquittal on Feb. 5, 2020. Clinton’s process was 127 days from the day the House authorized an impeachment inquiry to his Feb. 12, 1999 Senate acquittal. But, the matter was preceded by a months-long independent counsel investigation of the Lewinsky matter.

Despite what’s often said, the Trump Senate trial rules essentially modeled the rules Clinton’s Senate trial. However, one had witnesses, the other did not. Moreover, no new precedent was set for future trials. The Clinton trial rules gave each side 24 hours to present their case. After that, the Senate would vote on whether to allow witnesses. A GOP majority voted for witnesses in the Clinton trial. A GOP majority voted against witnesses in the Trump trial. So, presuming the same rules are applied whenever the next president is impeached—whether we have witnesses will likely depend on whether the president’s party controls the Senate or not.

How history judges these impeachments might likely depend on the historian. With one gaping difference about criminal offenses, the similarities between the two impeachments are uncanny.

Fred Lucas is a veteran White House correspondent and author of Abuse of Power: Inside the Three Year Campaign to Impeach Donald Trump (Bombardier Books, 2020).