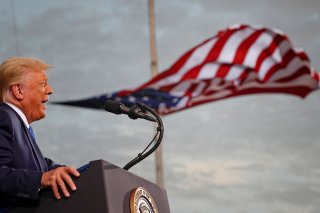 President Donald Trump and Democratic nominee Joe Biden will go head-to-head on the debate stage Tuesday night in a boiling race to land a spot in the Oval Office in November.

The debate, which is the first of three between Trump and Biden, will take place at Case Western Reserve University in Cleveland at 9 p.m. Eastern, with Fox News’s Chris Wallace as the moderator.

The candidates will be spread far apart—in efforts to practice safety measures amid the coronavirus pandemic, welcoming a crowd of fewer than one hundred people, all who have been tested for the virus.

Wallace will initiate the debate, with six 15-minute segments on issues that he’s chosen. The topics that will be covered are: The Trump and Biden Records; The Supreme Court; Coronavirus; The Economy; Race and Violence in our Cities; The Integrity of the Election, according to the Commission on Presidential Debates, a bipartisan nonprofit organization leading the event.

Here are some things to watch out for prior to Tuesday night.

Will Biden Keep Up?

It comes with no surprise that Trump has consistently dubbed Biden as “dumb,” senile and incompetent since the former vice-president announced his presidential bid. Trump has challenged his political opponent to take a drug test before the debate and is now requesting that Biden’s ears be examined for electronic devices prior to taking the debate stage, according to Fox News.

The president’s advisers, however, privately fear that these remarks will come back to bite Trump, as he’s set Biden’s performance expectations so low that any coherent statement or strong response could make him win the night.

Biden, 77, has flopped during his Democratic primary debate performances. He has either finished before his time was up or stumbled on words, marking his responses as confusing, unclear and inconsistent. Despite earning a reputation for being clumsy on the stage, Trump has acknowledged that Biden may have a slight advantage since he’s been in the political game a lot longer. "No, I think I’m the one without experience. I've just been doing this for a few years, he's been doing it for forty-seven years-plus," Trump told Fox News Radio last week.

At the 2008 and 2012 vice-presidential debates, “Biden cut a fast-talking, sometimes wise-cracking figure, mingling folksy turns of phrase with senatorial disquisitions on the finer points of policy,” blasting then-Republican vice-presidential nominee Paul Ryan. But he’s not the same debater than that of nearly a decade ago.

Will the Candidates Lose Their Tone or Control?

Both candidates have shown that they have a tendency to lose control when presented with certain issues. In an already polarized political climate, it’ll be interesting to see if either candidate will be lured in by the other’s witty or spiteful insults and lose his cool on the debate stage.

Trump will likely target Biden’s son, Hunter, for his involvement with a Ukraine energy company while Joe Biden served as vice president. The jab could spur into his opponent’s emotions if it involves a family member. It’s also expected that Trump will downplay Biden’s mental health and ability to run the country, referring to him as “Sleepy Joe” and reminding him of his clumsy debate performances in the past.

Biden, too, could make Trump lose his temper if he plunges into Trump’s leadership during the coronavirus pandemic that killed more than two hundred thousand Americans, a topic that illuminates the president’s weakness in forming a national response strategy to combat the deadly disease. Biden can also thwart Trump’s tax revelations that have been recently revealed by the New York Times, another issue that’ll likely trigger an angry Trump episode.

In either case, however, any loss of control or temper will likely blister election chances.

Will Trump’s Tax Bill Come Up?

Although the debate has pre-planned, contentious topics already selected, it’s likely that Biden will swipe a few jabs at Trump over whether he’s avoided paying federal income taxes.

The explosive unraveling of the New York Times report Sunday evening revealed that Trump paid no income taxes for ten of the fifteen years prior to getting elected in 2016, and just $750 in 2016 and $750 in 2017. The report sparked numerous questions about Trump’s finances. Records show that the president owes over $400 million in loans and debts, with most of it having to be paid during his second term in the White House if elected in November.

Just hours before the first debate, Biden’s campaign released the 2019 tax returns for him and his running mate, Sen. Kamala Harris (D-Calif.), indicating the start of many nudges at the president to release his official tax returns.

How Will Trump Defend his Handling of the Coronavirus?

Perhaps one of the biggest aspects of Trump’s negative narrative as president is his handling of the coronavirus pandemic. The United States leads worldwide in the number of reported coronavirus cases at about 7.19 million, making up 21.5 percent of the global case count.

The Trump administration has been condemned for their lack of leadership during the health crisis, as it spiraled out of control, setting the economy into a tailspin. According to the RealClearPolitics polling average of the public approval of the president’s handling of the virus, 56.6 percent disapprove, while only 41.6 approve. Since the issue has dominated the concerns of poll participants, Trump will likely have to answer tough questions regarding his decisions during the crisis and why he made them.

Biden will jump at the opportunity to emphasize Trump’s inability to lead during the pandemic given that he has refused to cooperate with public health experts and never implemented a nationwide mask mandate.

Trump’s response, however, will likely deflect his weaknesses. Instead, he will focus on the rapid production of testing and medical supplies, as well as expectations of seeing a vaccine. The president has promised publicly that once a vaccine is created and approved, Americans will be able to obtain a vaccine in twenty-four hours, providing hope to vaccine-supporters that the virus will subside after getting one.

How Will Chris Wallace Lead the Debate?

Wallace, a hard questioner and particularly prepared, was championed for his role in 2016 moderating the third debate between Trump and then-Democratic nominee Hillary Clinton.

Although Wallace has made it clear that he won’t fact-check at the debate, it’s expected that he’ll receive massive scrutiny for enabling false or misleading statements said by either candidate. In an interview with Trump earlier in the summer, Wallace called out false statements made by the president, so some Democrats fear that Trump will flood the debate stage with lies about his presidency and Biden’s track record.

“My job is to be as invisible as possible” Wallace told Fox News over the weekend. “I’m trying to get them to engage, to focus on the key issues, to give people at home a sense of, ‘why I want to vote for one versus the other.’”

Despite Wallace’s devotion to being “invisible,” Trump thinks the debate will be “unfair.”

“It’ll be unfair, I have no doubt about it,” Trump told Fox News Radio, referring to Wallace being the moderator. “But he’ll be controlled by the radical Left.”