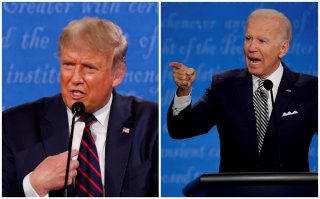 Democratic nominee Joe Biden said on Tuesday night that there should not be a second presidential debate in the event that President Donald Trump “still has Covid,” a remark that could potentially distract swing or undecided voters from backing Biden’s campaign on Election Day.

When reporters approached the former vice-president over whether he would feel comfortable debating Trump in person, who tested positive for the novel coronavirus last week, Biden said he will depend on the “guidelines of the Cleveland Clinic and what the docs say” to make his ultimate decision.

“I think if he still has Covid, we shouldn’t have a debate,” Biden said.

He added, “I think we were gonna have to follow very strict guidelines. Too many people have been infected. It’s a very serious problem, so I will be guided by the guidelines of the Cleveland Clinic and what the docs say is the right thing to do.”

Biden was tested negative for the coronavirus on Tuesday, as his campaign noted the negative test results have been recurring over the last few days.

But the Democratic nominee’s remarks could indicate a weakness for the former vice-president’s campaign, considering the two candidates will likely be six or more feet apart and taking extra precautions with the president having the virus.

The comments come just hours after Trump announced Tuesday morning that he’s ready for the second debate that’s scheduled to take place next week in Miami.

“I am looking forward to the debate on the evening of Thursday, October 15th in Miami,” Trump tweeted. “It will be great!”

The president took to Twitter about his plans to participate in the next match on the debate stage less than 24 hours after leaving Walter Reed National Military Medical Center while he was there receiving treatment for the coronavirus.

The remarks from both candidates for the 2020 election added to the swelling confusion over whether there will be another debate, since Trump contracted the deadly disease. According to the Centers for Disease Control and Prevention, “For most persons with COVID-19 illness, isolation and precautions can generally be discontinued 10 days after symptom onset.” There are, however, a “limited number” of cases where patients have to remain isolated after 10 days.

At the vice-presidential debate on Wednesday night, additional measures have been taken to reduce the risk of spreading the disease. The candidates, as well as the moderator, will be separated by sheets of plexiglass, an initiative that wasn’t implemented at the first presidential debate. Vice President Mike Pence and Sen. Kamala Harris (D-Calif.) will also be placed over 12 feet apart and all attendees in the crowd are required to wear masks during the entire debate, guidance that wasn’t pressured at last week’s debate as a number of family members didn’t wear masks when they were watching Trump and Biden rattle each other.

These extra precautions would likely guarantee stopping the spread of the virus, so should Biden feel fearful about debating Trump in person?

Following the first debate, Democratic lawmakers pushed Biden not to participate in another one, as it was filled with insults and jabs and barely addressed key policy issues heading into the election. Biden’s campaign squashed the suggestions and firmly said he’ll be at the next debate, but these remarks came before the president tested positive for the virus.

Although debates don’t have a substantial impact on swinging voters, Americans who still remain undecided could see Biden’s reluctance as chickening out.