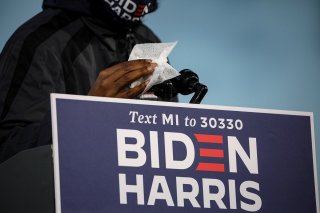 The president of a Florida-based manufacturing company sent employees a letter saying that if Democratic nominee Joe Biden wins the election, workers should expect “permanent layoffs” in the upcoming months.

According to WESH, an Orlando-area ABC affiliate, some workers at Daniels Manufacturing Corporation felt threatened after receiving the letter if they did not back President Donald Trump on Nov. 3. The corporation’s office broadcasts a Trump flag on the flag pole just outside of its office.

“If Trump and the Republicans win the election, DMC will hopefully be able to continue operating, more or less as it has been operating lately,” President George Daniels wrote in a letter with recent paystubs.

“However, if Biden and the Democrats win, DMC could be forced to begin permanent layoffs in late 2020 and/or early 2021,” he added.

Daniels has donated more than $600,000 to Trump’s campaign in this election cycle, as reported by the local station. He has also made donations to other Republicans in office.

DMC employee Stan Smith said he plans to quit after receiving the letter.

“Everybody has a choice to make their own decision,” Smith said.

While some workers agreed with Smith’s decision, they asked to remain anonymous out of fear of losing their jobs. Other DMC employees, however, believed Daniels’s letter wasn’t threatening or out-of-line.

“I don’t feel like it was correct, to do something like that,” Smith said. “That’s like me coming to work—because we had all these black killings—and I should come in here and I should wear a Black Lives Matter shirt and bring out hats and pass them out to everyone. I felt like it was unfair.”

Daniels defended his actions to WESH in a statement. “I have been doing this for years,” he said. “I have an obligation to let workers know what could happen, based on the outcome of an election. They certainly should vote for the candidate they want.”

The letter comes as early voting in the Sunshine State opened Monday morning, with thousands of Floridians lined up at polling places across the state, with most donning masks and practicing social distance efforts.