Polls Won't Decide Trump vs. Biden. Coronavirus and the Economy Will. 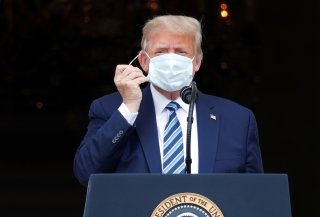 If voters just depended on the national polls, Democratic nominee Joe Biden would defeat President Donald Trump by a landslide.

Biden has an 85 percent chance of winning the election on Nov. 3, according to FiveThirtyEight’s election forecast.

But poll analysts must proceed with caution. In 2016, the same election forecast indicated that former secretary of state Hillary Clinton rallied more than a 70 percent chance of winning the election, but of course, that didn’t happen. On Election Day, states that polled blue during Clinton and Trump’s campaign trails actually switched to back Trump, with most of them being swing states.

Biden, however, has maintained a wider margin over Trump than Clinton had, including in most of the swing states that tend to serve as paths to a strong victory for a spot in the White House.

Since the start of October, the former vice-president has maintained around an eight percent lead in the average national polls against Trump, nearly a three percent wider margin than Clinton garnered during the same time in 2016. Biden clearly has a broader polling lead than the Democratic nominee had four years ago, offering Democrats boosted hope that Biden will kick Trump out of the White House.

In battleground Pennsylvania, Biden has a 7.1 percent advantage over the president as of Friday, according to FiveThirtyEight’s average polls for the state, a figure that’s climbed since the chaotic first presidential debate and Trump testing positive for the coronavirus. As a traditionally Democratic state, 2016 average national polls indicated that Clinton held nearly a six percent lead over Trump at the same time in October. But as Election Day inched closer, the race for the state’s support grew tighter, with the president ultimately winning the crucial battleground state, shocking polling analysts, reporters and even Clinton.

In Michigan -- yet another state that surprisingly turned red in the 2016 election -- hasn’t voted for a Republican president since 1988 when President George H.W. Bush ran. Biden currently holds a 8.2 percent lead over the president with less than a month to go before Election Day. The state’s governor, Gretchen Whitmer (D) topped Biden’s running mate shortlist, and if he had picked her, it perhaps could have been a guaranteed win from the state’s support. In early October 2016, Clinton was up 7.5 percent until her curve declined after the second and third presidential debates.

Trump has garnered 43.2 percent of support from Wisconsin’s average polls, a figure that’s generally familiar to the president as he held nearly the same percentage at this point in the 2016 general election. But Trump saw a greater number backing his re-election bid before he announced his coronavirus diagnosis, an issue that rattled voters due to the lack of transparency bleeding from the White House.

Last week, Trump spent four days at Walter Reed National Military Medical Center, where he received treatment for COVID-19 since he displayed mild symptoms and required supplemental oxygen. While the president’s doctors have communicated with the country on Trump’s condition, it still remains unclear when he last tested negative for the coronavirus.

When Clinton and Trump competed for a spot in the Oval Office, the two danced around the first place spot in Florida, with Trump ultimately winning the state’s vote on Election Day, earning just one percent more of the popular vote.

After the first presidential debate between Biden and Trump, the former vice-president’s support from the Sunshine State generally increased, as his lead hovered around two percent, an advantage that’s doubled since his debate performance.

The second presidential debate was expected to take place in Miami at a town hall event, but Trump’s refusal to participate in the matchup -- that’s now switched to be virtual -- has sparked fresh uncertainty over the rest of the debate schedule.

Another state that Clinton and Trump took turns leading in terms of the state’s support was North Carolina, a state that’s generally voted red for nearly four decades, except for President Barack Obama in 2008. Biden’s tight lead in the state rests at 2.8 percent, a margin that’s also seen an increase since Trump tested positive for the virus.

In newly-labeled battleground Arizona -- as it’s only voted blue once in the last 50 years -- Biden has 48.6 support from the state’s voters, while Trump has 44.8 percent. Trump is averaging worse compared to 2016, as he had roughly 45 percent of the state’s support when he battled Clinton, a margin that never surpassed around four percentage points during election season.

So, what does this all mean?

Overall, swing states are polling better for Biden and worse for Trump. Some polling analysts attribute the president’s diminishing candidacy to his poor handling of the coronavirus that’s left more than 214,000 Americans dead. But with the election nearly three weeks away, voters are balking at relying on the accuracy of the polls, as they did in 2016. Although Biden’s lead in swing states are generally posting stronger than Clinton’s, according to FiveThirtyEight polling data, the real election results remain uncertain as the coronavirus pandemic and economic crisis continue.