Trump Won't Do a Virtual Debate. History Suggests He Won't Be the Last. 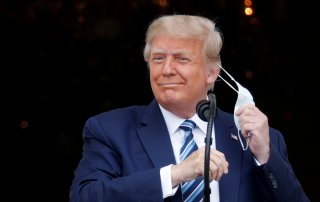 After the first televised presidential debate in 1960 -- between President John F. Kennedy and then-Republican nominee Richard M. Nixon -- the country didn’t see another matchup between a Republican and a Democratic candidate for 16 years.

During that time period, the candidates who refused to appear with their challengers, reasoned that there was no point to participate, as they held significant polling leads prior to debate season.

The move, perhaps helped the candidates, since all of them ended up winning their White House bids.

President Donald Trump announced on Thursday that he’s “not going to do a virtual debate,” as he doesn’t want to “waste my time on a virtual debate.” The remarks come after the Commission on Presidential Debates shifted the format for the second debate to be virtual, rather than in-person to prevent spread of the novel coronavirus. Trump’s refusal to participate in the debate has sparked uncertainty over the rest of the debate calendar, as Trump’s campaign and Democratic nominee Joe Biden’s campaign can’t reach an agreement. The commission essentially gave Biden a free gift as it did not provide Trump with an opportunity to negotiate—and was adopting Biden’s position that the debate should be virtual. It should come as no surprise that Trump refused.

In the 1960s and 1970s when candidates refused to participate, it wasn’t because of pandemics or the flu. Instead, they touted their polling leads -- an advantage that Trump doesn’t have -- and referred to a federal equal time rule that forced broadcasting networks to treat candidates from different parties -- even the less popular ones -- equally. The mandate prevented televised debates, since they only included members from the two major parties. In 1976, debates resumed after politicians discovered a loophole in the ruling, by getting an external organization -- not a television network -- to sponsor them, enabling debates to proceed with just two candidates.

Now, if presidents refuse to participate in debates, it can be seen as a sign of weakness.

It’s important to examine debate behavior and patterns, as the 16-year hiatus left a memorable imprint on modern history. Here are the candidates who refused to battle their political opponents.

Johnson was sworn in as commander-in-chief when Kennedy was assassinated in 1963. After finishing up his partially first-term in the White House, Johnson ran for re-election and rejected requests to debate Goldwater.

“The President evidently believes that he is under no necessity to refine, clarify and underscore his opinions, because Senator Goldwater is giving the voters no alternatives they can reasonably choose,” The New York Times wrote in 1964 when Johnson made his refusal to participate in a debate public.

Johnson couldn’t find a reason to debate his political opponent, as polls indicated that the incumbent president was well ahead and expected an overwhelming victory. He also said that a poor debate performance would only crumble his presidential candidacy, so he persisted in refusing to participate in a debate.

The Democratic nominee ended up winning by a landslide, as he won by more than 15 million votes and over 430 Electoral College votes.

In the first ever televised presidential debate in 1960, Nixon lost the first of the debate series. Historians suggest that “Nixon’s pale, perspiring look” and lack of makeup compared to his political opponent, Kennedy, who appeared tan and strong, hurt him politically. The fact is that those who listened on the radio concluded that Nixon’s performance was in fact superior to Kennedy’s. Kennedy demagogued his way by claiming that there was a “missile gap.” In truth, he knew there was none.

Nixon was also hospitalized just weeks before the presidential in-person matchups and later contracted the flu when he arrived in Chicago for the first debate against Kennedy.

Nixon ran again in 1968, where he followed Johnson’s refusal to participate in a debate against Vice President Hubert Humphrey.

When he first ignited his campaign trail, Nixon held a double-digit polling lead over Humphrey, as he used his widespread advantage as a reason to not battle head-to-head with his competitor on the debate stage. Nixon won the 1968 presidential election by less than one percent of the popular vote. He did, however, earn 301 electoral votes.

During Nixon’s campaign trail, the president rarely even uttered his name.

The president held a significant polling lead heading into election season, and dubbed that as an excuse to not debate McGovern. In 1980, President Jimmy Carter declined to participate against then-California Gov. Ronald Reagan and the third-party candidate John Anderson. Carter had said that he didn’t want to debate Anderson, but Reagan noted that he wouldn’t debate without the third-party candidate.

“Once you start opening up the system, it is hard to say where you draw the line,” White House press secretary Jody Powell told The Washington Post in 1980. "It is not our intention to participate in debates with third, fourth or fifth party candidates." Reagan ended up winning by a landslide. The system, as it were, did not open up to extra candidates in 2020. Instead, it failed to function as the second debate was scrapped. What the effects will be for both the Trump and Biden campaigns remains an open question.

Polls Won't Decide Trump vs. Biden. Coronavirus and the Economy Will.