Who Will Control the U.S. Senate? Watch These Key Races Tonight. 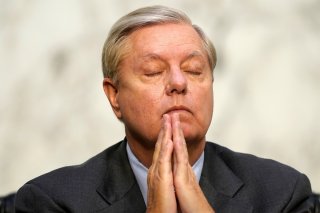 The race for the White House isn’t the only election that’s triggered anxiety among voters. A slew of closely contested Senate races also have Americans in a bundle of nerves, as Democrats have a strong chance of gaining control of the upper chamber after a six-year hiatus.

Republicans won the Senate back in 2014 and currently hold a 53–47 majority, with Democrats needing a net gain of four seats to flip the chamber blue. But if Democratic nominee Joe Biden wins the presidential election, the party will only need three seats, as his running mate, Sen. Kamala Harris (D-Calif.) would break the tie in the Senate.

In the event of a divided government on Capitol Hill, experts suggest that Biden would have a harder time passing legislation in a GOP-led Senate than President Donald Trump would in a Democratic one.

“If elected, Joe Biden will have two immediate priorities: a national plan to combat the pandemic, and a national economic relief and stimulus package. A Republican Senate would surely oppose the latter. The Senate has not been willing to support additional measures the Trump administration has urged,” Rogers Smith, a professor of political science at the University of Pennsylvania, said. “Depending on the terms, a Republican Senate might, however, support a national pandemic plan.”

There are nearly a dozen races in predominantly GOP-led states with seething Senate contests including in Georgia, Iowa and South Carolina. Republicans can afford to drop three seats in the upper chamber and still maintain control, as long as Trump is re-elected.

“If re-elected, President Trump might actually have more success with a Democratic Senate. They might well feel compelled to support economic relief and stimulus measures the president proposes. They are likely to oppose him on much else, however, contributing to further national gridlock and polarization,” Smith added.

“In each case, divided government would encourage a continuation of presidents’ use of executive orders and other unilateral actions to achieve their policy agendas. In an ideal world, the parties would work to compromise and produce bipartisan legislation,” Brandice Canes-Wrone, a Donald E. Stokes professor of public affairs and a professor of politics at Princeton University, said. “Trends that predate the Trump administration suggest that bipartisan compromise will be replaced by unilateral presidential action.”

Here are some of the top races to watch on election night.

After beating a Republican in a special election in 2017 in a deeply conservative state, Sen. Doug Jones (D) became the first Democrat to serve in the Senate office for Alabama for nearly two decades. Considered positioned as the “Democrats’ most endangered Senator,” Jones is facing Tommy Tuberville (R), the former head football coach at Auburn University and a strong GOP candidate backed by Trump. Trump crushed the 2016 race for Alabama’s statewide support and will likely rally electoral votes again in 2020.

Although Jones has fundraised more money than his political opponent, Tuberville has garnered a double-digit lead, with Cook Political Report projecting the race with a “lean” toward the GOP candidate.

Sen. Martha McSally (R) faces a tough race to maintain her seat in the upper chamber, as her political opponent, former astronaut and well-funded, gun-control activist Mark Kelly (D) has earned a 5.7 percent average edge in the polls and Cook Political Report predicts a slight “lean” toward the Democrat.

McSally has appeared with Trump at campaign rallies in the state, but she recently declined to comment if she’s proud of her support for the president.

The race for the White House in the battleground state is slightly trending toward Biden, as he’s rallied a less-than-one-percent lead over the president.

“A particularly interesting race is in Arizona between McSally and Kelly, where Trump is outperforming McSally. Conventional wisdom suggests that Trump is hurting the Republican ticket, yet there appear to be cases such as this one where Trump is outperforming the congressional race despite the lack of a scandal or other clear-cut factor that would explain the divergence,” Canes-Wrone said. “Whether this is due to some Democratic crossover for Trump, polling error, gender dynamics or another factor will be interesting to watch.”

Former 2020 Democratic presidential candidate and former Colorado governor John Hickenlooper has a strong chance at defeating incumbent Sen. Cory Gardner (R), as the state is also expected to back Biden in the race for the White House.

Gardner has tried to distance himself from the president on the campaign trail since Trump is unpopular among Colorado voters.

The Cook Political Report projected that the race is leaning Democratic, granting Hickenlooper a slight edge.

With two seething Senate races in the Peach State, both have been labeled as a “toss-up,” according to the Cook Political Report.

The first, between Sen. David Perdue (R) and former Dollar General executive Jon Ossoff (D), is very tight and “could determine the Senate majority,” according to Canes-Wrone. Even though Georgia has been considered a traditionally red state, Atlanta demographics are changing, as Biden has rallied a major competition against Trump in the state. Perdue has also been battling Ossoff, with the Democratic candidate outraising the Trump ally and bashed him for his coronavirus response.

According to Georgia’s election rules, if no candidate secures at least 50 percent of the vote in November, the top two go to a runoff in January. Considering the close race for both seats, it’s likely that the country won’t see the ultimate results until next year.

Both RealClearPolitics (RCP) and the Cook Political Report have described the race as a toss-up, even though Trump has rallied a two-point margin over Biden in the state and won significantly in 2016.

Four-term Sen. Susan Collins (R) is struggling against Maine Speaker of the House Sara Gideon (D) in a state that will likely back Biden in the presidential election. Collins, however, was wildly popular in recent years, but her candidacy tanked when she voted to support the 2018 nomination of Justice Brett Kavanaugh, a decision that’s haunted her on the Senate campaign trail, as moderates and liberals have attacked her for the move.

The Cook Political Report has labeled the race for her seat a genuine toss-up.

Sen. Steve Daines (R) is battling two-term Gov. Steve Bullock (D) for his Senate seat, with Daines slightly ahead, according to recent polls.

With Montana being a mainly red state that will most definitely back Trump in the presidential election, this should help Daines’s re-election chances and block Bullock from earning an upper chamber win. Republicans have dubbed the Democratic candidate as being too liberal for the state, and Donald Trump Jr. referred to the incumbent as a “good friend & hunting buddy.”

During the final sprint of the campaign trail, news uncovered an affair scandal relating to Cunningham that Republicans thought would secure a GOP upper chamber win in November. But amid the unraveling, Tillis tested positive for the coronavirus after attending the massive White House event for Barrett’s nomination to the Supreme Court.

With Cunningham and Biden slightly in the lead for support from the state, the Cook Political Report labeled the senate race a toss-up.

Sen. Lindsey Graham (R), the chairman of the Senate judiciary committee, who played a notable role in the swift confirmation process for Barrett’s Supreme Court nomination, lies in peril as Democratic challenger Jaime Harrison has inched up in the polls.

Graham, who has served in the upper chamber for nearly two decades, originally advocated against Trump in 2016, arguing that he would refuse to vote for his presidential candidacy. Since then, however, the senator has flipped stances, as he’s grown to be an avid Trump supporter.

If Harrison defeats the incumbent, then it would make the state the first to have two active Black senators. Both RCP and the Cook Political Report have labeled the race as a toss-up.

“There are a number that are important, but if Lindsey Graham were to lose to Jaime Harrison in South Carolina, it would signal that the period of winning by supporting Trump is definitively over,” Smith said. “Still more significantly, it would show that the time when liberal African Americans had no chance in the South is at an end.”