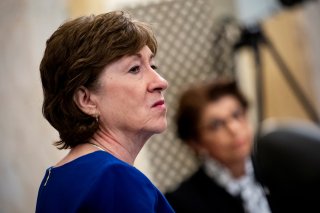 Sen. Susan Collins (R-Maine), ahead of a tough election, confirmed Tuesday that she will support the Democratic blockade against President Donald Trump’s Supreme Court nominee if presented on the Senate floor.

With just six weeks to Election Day, Collins said it’s too close to support and confirm a justice nomination.

“My statement was a model of clarity. . . . I made it very clear, yes, that I did not think there should be a vote prior to the election. And if there is one, I would oppose the nominee," Collins told reporters when asked about her stance on voting for a nominee before the upcoming election.

“Not because I might not support that nominee under normal circumstances, but we’re simply too close to the election, and in the interest of being fair to the American people— and consistent, since it was with the Garland nomination,” Collins said.

Collins—who has served in the upper chamber for more than two decades—has a tanking reelection bid, as some pollsters say the race is leaning Democratic. The Maine lawmaker experienced pushback following her vote to confirm Trump’s former nominee Brett Kavanaugh, who assumed sexual assault allegations in 2018. Rejecting the president’s upcoming nominee could boost her reelection chances as Maine’s polls show an apparent disfavor for the president.

“The decision was made not to proceed, a decision that I disagreed with, but my position did not prevail. I now think we need to play by the same set of rules,” she added.

Collins’s Republican colleague, Sen. Lisa Murkowski (Alaska) sided with her in supporting the Democratic effort to block the president’s nominee, who is expected to be released Saturday.

If Trump’s nominee is confirmed and passed through a Senate floor vote, then it would lock in a 6-3 conservative majority on the nation’s highest court for a number of years.

Following Justice Ruth Bader Ginsburg’s death on Friday, Senate Majority Leader Mitch McConnell (R-Ky.) vowed to fill the vacant seat with Trump’s pick, although it’s unclear if the confirmation process will be able to take place before the election.

McConnell appears to have rallied enough votes to garner a judicial win for the GOP, as swing voters including Republican Sens. Mitt Romney (Utah), Cory Gardner (Colo.) and Chuck Grassley (Iowa) said they will vote to support Trump’s effort to drive a conservative justice into the Supreme Court.

The death of Ginsburg triggered a brutal fight between both parties, as Democrats are powerless with a GOP-controlled Senate, besides causing havoc and uproar at Judiciary Committee hearings, which are slated to be scheduled after Trump makes the formal announcement of his nomination.