Are the European Parliament and Human Rights Watch Hypocritical or Just Racist? 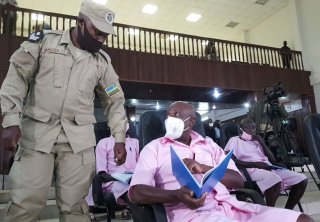 The trial of Paul Rusesabagina, the hotelier made famous in the 2004 film Hotel Rwanda, continues in Kigali. Rusesabagina arrived in the Rwandan capital last August after boarding a private jet he believed would fly him to the neighboring state of Burundi.

In Kigali, Rusesabagina faces a number of charges related to his embrace and finance of an armed group that launched a series of deadly terror attacks in southern Rwanda. The evidence against him is overwhelming. While Hollywood has its black tie parties and human-rights groups their galas, Rwandans live with the legacy of both anti-Tutsi genocide and terrorism. This is why Rwandans despise Rusesabagina as an opportunist unguided by morality, especially after he sought to avoid charges on the basis that he was not a Rwandan citizen just five years after running for Rwanda’s presidency.

Rather than directly address the evidence of money transfers and YouTube videos of Ruseabagina endorsing violence, many activists have focused on the manner of Rusesabagina’s arrest. “Rusesabagina Was Forcibly Disappeared,” Human Rights Watch declared, despite videos showing Rusesabagina boarding the private jet without duress and under his own free will. The European Parliament joined the fray with a resolution condemning “the enforced disappearance, illegal rendition and incommunicado detention of Paul Rusesabagina.”

But was the deception involved in Rusesabagina’s arrival in Rwanda illegal? Not if European precedent matters. Consider the case of Walter Stocké. In 1975, after his building and construction firm went bankrupt, the West German government launched an investigation into fraud and tax evasion against Stocké. A German court initially released Stocké during proceedings but, when it became apparent that he was not complying with court orders, the Ludwigshafen District Court ordered his detention. Rather than abide by the German warrant, Stocké fled first to Switzerland and then to Strasbourg, just across the Rhine River from Germany. German police coerced a police informer, known as “Mr. Köster,” to lure Stocké back to Germany in exchange for a reduction of his own sentence. Mr. Köster proposed a business deal to Stocké but then told him that the fellow investors had not been able to make it to Strasbourg, but would instead meet him in Luxembourg. Stocké willingly boarded a chartered plane that Mr. Köster had secretly arranged to land in Saarbrücken, which is where German authorities promptly arrested Stocké. In subsequent proceedings, the European Commission of Human Rights found that German authorities based Stocké’s arrest on a valid warrant. The European Court of Human Rights agreed that the Germans had lured Stocké under false pretenses, but it ruled against the French objection because Mr. Köster had tricked rather than forced Stocké onto the private plane.

There are other precedents. The French Court of Cassation dismissed a motion by the Nazi war criminal Klaus Barbie, the so-called Butcher of Lyon, which said he was the victim of an improper extradition. Many of the same issues arose in the circumstances surrounding the Israeli capture of Adolf Eichmann in Argentina. The International Criminal Tribunal for Yugoslavia likewise dismissed Bosnian Serb war criminal Dragan Nikolić’s appeal regarding the circumstances of his arrest and delivery to The Hague.

Nor are such tactics uncommon in the United States. Police in Phoenix, Arizona, made headlines when they lured two dozen criminals into police hands by tricking them into believing they had won a prize. Police regularly pretend to be minors, criminals, or senior citizens in order to catch criminals. Likewise, police trick suspects into providing DNA by offering them a glass of water or convincing them to lick a stamp. In 1966, the U.S. Supreme Court found against labor boss Jimmy Hoffa who had complained about entrapment. The Justices concluded that Hoffa must assume the risks of confiding in his own associates, even if they were not whom he believed them to be.

Thus, the European Parliament and U.S.-based human-rights groups like Human Rights Watch declared that Rusesabagina’s arrest amounted to kidnapping or forced disappearance. On its face, such findings are ridiculous given Rusesabagina boarded the private jet freely and only realized his mistake when he landed. But the European parliament’s findings and Human Rights Watch’s declaration both turn decades of legal precedent on their head. In effect, European parliamentarians appear to believe European precedents should not apply to Africans. Seldom has there been a starker embrace of progressive racism in Brussels. As for Human Rights Watch, its actions suggest that under the leadership of Kenneth Roth, bowing to Hollywood and celebrity trump more both law and the rights of terror victims. Either way, Africans are right to label such hypocrisy as rooted more in racism and condescension than justice and humanitarian law.