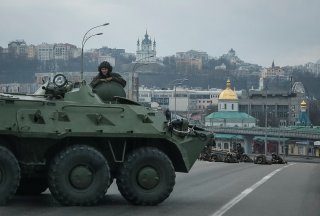 Cyberattacks have been a persistent feature of the Russia-Ukraine war in its opening days. During the initial assault, dozens of Ukrainian websites were taken down by distributed denial of service, or DDoS, attacks, and data-wiping malware was detected on several government computers soon after.

Although the cyberwarfare battle has so far remained decisively in Russia’s favor, Ukraine has called on members of its “hacker underground” culture to act against Russia. Messages posted on hacker forums reportedly called on Ukrainians to “get involved in the cyber defense of our country.” The forums invited skilled computer users to submit applications describing their areas of specialty for the country’s benefit.

The Ukrainian government has also begun to receive assistance from an unusual source: the hacker collective known as “Anonymous.” Anonymous is widely known for its previous attacks on Western governments, the Islamic State (ISIS), and the Church of Scientology.

“The Anonymous collective is officially in cyber war against the Russian government,” the group wrote on Twitter.

In its opening salvo, the group took down, or significantly slowed, several Russian government websites, including those of the Kremlin, the State Duma, and the Russian Ministry of Defense. It also briefly caused the website of RT, the Russian state-run foreign television broadcaster, to crash, although the website was later restored.

Anonymous also attacked a series of Russian telecommunications companies and internet service providers, including Relcom, Sovam Teleport, Com2Com, and PTT-Teleport Moscow. All of these websites have since recovered, although the attacks could continue in the future.

Launching cyberattacks and planting malware are two consistent features of modern war, and both were also used extensively in the run-up to Russia’s invasion. On February 16, Ukraine’s Ministry of Defense and two of the country’s largest banks were each attacked, taking the pages offline for several hours and obstructing the flow of money and information within the country.

In January, Microsoft warned that it had identified a new strain of malware unique to Ukrainian computers. The strain was designed to appear the same as ransomware but without the usual “recovery” mechanism allowing computers to be unlocked after a ransom is paid.

The new code was “intended to be destructive and designed to render targeted devices inoperable rather than to obtain a ransom,” Microsoft announced in a blog post summarizing the Russian cyberattackers’ strategy against Kyiv.