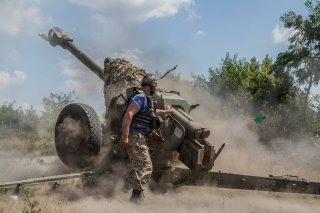 An anonymous official within the Ukrainian government has reportedly revealed that Kyiv was responsible for three significant explosions in Crimea, the formerly Ukrainian peninsula that Russia invaded and annexed in 2014. The official added that the United States had offered its support for the strikes, according to Politico.

The most significant of the three strikes took place at Russia’s Saki airbase, destroying an undetermined number of Russian planes and degrading the invading army’s capabilities in Ukraine’s southeast.

Although Ukrainian officials have refused to publicly confirm that their forces had been responsible for the strikes, they have also generally refused to rule the possibility out. Ukrainian defense minister Oleksii Reznikov claimed in an interview with the Washington Post that Kyiv would not rule out future strikes against the peninsula as a means to achieve the “de-occupation of temporarily occupied territories of Ukraine where the enemy is”—broadly placing Crimea in the same category as the regions that Russia has captured since the start of its invasion on February 24. Reznikov added that Kyiv would not launch attacks within Russia’s undisputed territory, although some experts believe that it may have already.

Mykhailo Podolyak, a senior adviser to Ukrainian president Volodymyr Zelensky, claimed in an interview with the Guardian that Crimea would likely experience further explosions over the “next two or three months,” suggesting that Kyiv was planning to launch further strikes on the peninsula.

An anonymous U.S. official later told Politico’s “National Security Daily” blog that the United States would support strikes on Crimea “if Kyiv deems them necessary.” The official added that the United States was not involved in selecting Ukrainian targets and emphasized that the weapons it had provided to Kyiv were intended for self-defense purposes, but noted that “any target they choose to pursue on sovereign Ukrainian soil is by definition self-defense.”

The United States does not recognize Russia’s claim to Crimea, and the official later clarified to Politico that “Crimea is Ukraine”—an explicit declaration of support for any potential strikes launched by the Ukrainian military in the area.

“Russian forces have no business [in Crimea],” Kurt Volker, Washington’s former ambassador to NATO and the U.S. special representative for Ukraine negotiations from 2018 to 2019, added. “Attacking Russian forces in Crimea is no different than attacking them around Kyiv or in Kherson or eastern Ukraine.”