‘Massive Blackout’: Russian Strikes Cause Outages in Lviv and Moldova 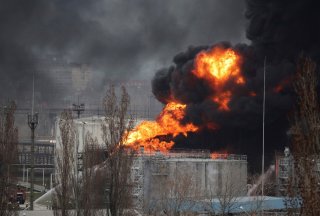 Russian forces launched another wave of massive airstrikes against key Ukrainian infrastructure targets in their ongoing effort to collapse the country’s energy grid.

Kyiv mayor Vitali Klitschko noted, without providing further details on the extent of the damage, that missiles hit one of the capital’s infrastructure sites. “Several other explosions in various neighborhoods,” he added, according to Euronews. “Rescue services and doctors are on their way to the affected places.” Access to water has been cut off all throughout the city, Klitschko warned.

The strikes left the entire western city of Lviv without power, local officials said. “The whole city is without light. We are waiting for additional information from energy experts. There may be interruptions with water supply,” tweeted Lviv mayor Andriy Sadoviy. Serhii Hamalii, governor of the western Khmelnytskyi region, said most of the surrounding region, including part of Khmelnytskyi city, is suffering from outages. Officials in Mykolaiv, a major southern city to the north of Kherson, have reported mass outages and disruptions in access to water.

The Wednesday attacks are part of a concerted Russian effort, initiated with a round of unprecedented strikes on October 10, to degrade Ukraine’s energy infrastructure. Russian military commentators said the attacks are intended to have a cumulative effect, with each subsequent strike further diminishing the overall stability of Ukraine’s energy infrastructure heading into the winter months. Russia’s relentless assault on the Ukrainian energy grid is exacerbating the mounting challenges to the country’s rapidly shrinking economy while also precipitating a refugee crisis in neighboring European Union (EU) states that are dealing with serious energy challenges of their own.

Ukrainian president Volodymyr Zelenskyy announced his government is setting up 4,000 emergency sites—referred to as “Points of Invincibility” —across the country to provide citizens with access to basic services including “electricity, mobile communications and the Internet, heat, water, and a first-aid kit.”

Ukraine’s neighbor Moldova reported sweeping blackouts due to the strikes. “Massive blackout in Moldova after today’s Russian attack on Ukraine’s energy infrastructure,” Moldovan infrastructure minister Andrei Spinu wrote on Twitter. The Russian attacks caused blackouts across more than half of Moldova, according to Reuters. The entire area of the Russian-backed separatist enclave of Transnistria was left without electricity, reported Russian state news outlet TASS, citing local media sources. Power was restored in the capital Chisinau by late afternoon, a Reuters journalist reported. Moldova has been connected to the Ukrainian power grid since the Soviet era.

“Russia left Moldova in the dark,” Moldova’s president Maia Sandu wrote on Facebook. “We can’t trust a regime that leaves us in the dark and cold, that deliberately kills people for the mere desire to keep other peoples poor and humble.”