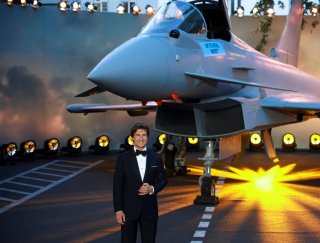 Top Gun: Maverick, the sequel to 1986’s Top Gun, arrived last month as a nearly complete triumph. The movie got almost unanimously positive reviews from critics, and audiences loved it. Maverick has also been a massive box office success, bringing in $400 million domestically through last weekend. That makes Maverick, which once again stars Tom Cruise as Navy pilot Pete “Maverick” Mitchell, the year’s top movie so far. In fact, it’s hard to find anyone who didn’t like the film, which seems to have surmounted America’s political divides.

The film, directed by Joseph Kosinski, sees Maverick, still a captain in his fifties, returning to the Top Gun school in order to train a new generation of pilots. They then go on a dangerous mission that entails bombing an enriched uranium facility located at the bottom of a canyon, and then quickly flying uphill out of it. The pilots must also avoid surface-to-air missiles and fifth-generation fighters. Much like in the original Top Gun, the film never reveals which country America is battling, nor does it dwell in the slightest on the geopolitical ramifications of any of the action.

However, Top Gun: Maverick has occasioned reprises of many of the debates from the original film. One topic being debated is the way the movie depicts the military, Cmdr. Dave Benham, a spokesperson for the Navy, said in a recent interview with Flying Magazine.

Just as it did with the original in 1986, the American military has set up recruitment tables outside screenings of the movie. “Our recruiters nationwide are working tirelessly to meet those goals and to meet the manpower needs of our fleets. We think Top Gun: Maverick will certainly raise awareness and should positively contribute to individual decisions to serve in the Navy.” However, USNI News stated that such efforts, if history is any judge, will likely not be successful.

Journalist Alan MacLeod of Mint Press News, armed with documents from a Freedom of Information Act (FOIA) request, takes things even further in an article titled “Top Gun: Maverick is Military Propaganda. Official Documents Prove It.” The piece quotes Tom Secker, author of National Security Cinema: The Shocking New Evidence of Government Control in Hollywood, who obtained the FOIA documents. The agreement was reached during the film’s production in 2018; with pandemic delays factored in, Maverick took four years to reach the screen.

Secker obtained an agreement between the Department of Defense and Paramount Pictures in which the Pentagon agreed to provide the producers of Top Gun access to various equipment, locations, and personnel while granting its imprimatur to the production. In exchange, the Pentagon was allowed to “[a]ssign a senior staff, post-command Officer to review with public affairs the script’s thematics and weave in key talking points relevant to the aviation community.” In addition, the Pentagon was given the right to suspend its cooperation in the event that the casting of actors wasn’t in line with “military Service regulations governing age, height and weight, uniform, grooming, appearance, and conduct standards.”

However, some have pointed out that this sort of thing is far from unusual, and possibly not all that nefarious. For one thing, the provision about the haircuts was likely the Pentagon wanting to ensure accuracy. “For Some Perspective: this is the case for every single movie the DoD has ever participated in. From Lone Survivor to Black Hawk Down,” Associated Press investigative report James LaPorta said on Twitter. Others pointed out that they realized the film was propaganda just from watching or being aware of it, and a FOIA of official documents was unnecessary.

Once again, Top Gun: Maverick is purposely vague about geopolitics, never identifying the enemy or the country where the final mission takes place. Furthermore, this piece of “military propaganda” has as its hero a pilot who frequently disregards direct orders.

It’s hard to imagine this sort of thing moving the needle when it comes to public support for military intervention, no matter how popular the movie is. Many will come out of Top Gun: Maverick concluding that those fighter planes look really cool, while I suspect fewer will come out of the film believing strongly that it's time to go to war with Iran. The Pentagon’s participation in the film likely has more to do with encouraging the former reaction than the latter one.