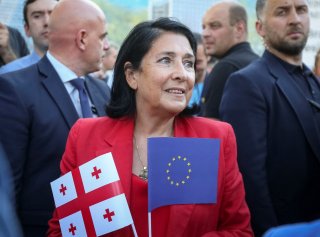 A rally in Tbilisi, Georgia’s capital, attracted tens of thousands of protesters demonstrating

in support of the country’s accession to the European Union (EU)—an implicit rebuke to the European Commission, the EU’s executive branch, which deferred acceptance of Georgia’s candidate status until the end of the year.

An estimated 60,000 supporters are thought to have attended the rally, which took place outside Georgia’s parliament building in Tbilisi's central square. Demonstrators waved Georgian and European Union flags, carried signs reading “We Are Europe,” and sang “Ode to Joy,” the EU’s anthem. Many also waved Ukrainian flags in a show of support for Kyiv in its ongoing war against Russia.

The European Commission announced on Friday that it was prepared to immediately grant candidate status to Ukraine and Moldova but had declined to grant it to Georgia. While Ursula von der Leyen, president of the European Commission, claimed that Georgia had made a “huge step forward” during the application process, she insisted that the country meet a number of additional conditions before its membership could be considered. The Commission clarified that it would “come back and assess how Georgia meets [its] conditions” by the end of 2022, and would be prepared to award the nation candidate status after its review was complete.

This answer was not sufficient for many of the demonstrators, who have highlighted the ongoing events in Ukraine as evidence that European integration should proceed more quickly. “Europe is a historical choice and an aspiration of Georgians, for which all generations have given sacrifices,” the rally’s organizers wrote on Facebook.

Georgian president Salome Zourabichvili praised the demonstrations, claiming that “our message is that we want a European Georgia.” The country’s opposition parties also voiced their support, suggesting that the rally “demonstrat[ed] the commitment of the Georgian people to its European choice and Western values.”

Since its independence from the Soviet Union in 1991, Georgia has maintained a delicate relationship with both Russia and the European Union. The country’s first post-independence president, former Soviet foreign minister Eduard Shevardnadze, sought close relations with Russia but was forced from power after anti-corruption protests in the 2003 “Rose Revolution.”

His successor, Mikheil Saakashvili, moved the country toward integration with Europe, leading to growing tensions with Moscow—culminating in Russia’s invasion of Georgia in 2008 to secure the independence of two pro-Russian breakaway regions, Abkhazia and South Ossetia, in the country’s north.

Saakashvili was later forced into exile in Ukraine and was ultimately imprisoned upon his return to Georgia, but the country’s trajectory toward European integration has continued. While some leaders within the governing Georgian Dream party have urged closer relations with Russia, others, including Zourabichvili and party chairman Irakli Kobakhidze, have voiced support for Georgia’s accession to the EU.