“The Hunt” Is Not the Movie You Think It Is 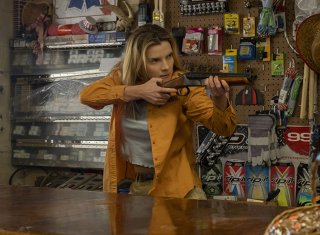 Director Craig Zobel’s thriller The Hunt might have come out in theaters on schedule in September 2019.

Instead, it endured months of controversy then quietly began streaming in the middle of a pandemic in March 2020.

Which is too bad. The Hunt is great. I mean, really great. And not for the reasons you might think.

The seven-month delay came down to just a few words. Screenwriters Damen Lindelof and Nick Cuse slipped a few lines of text and dialogue into the script that made a glancing, negative reference to Pres. Donald Trump, and also characterized Trump’s most extreme followers as “deplorables.”

Here in the real world back in mid-2019, the actual Trump took note -- and turned the Blumhouse production into an object of minor controversy.

“Hollywood, I don’t call them the elites,” Trump said in reference to The Hunt. “I think the elites are the people they go after in many cases. But Hollywood is really terrible. What they’re doing, with the kind of movie they’re putting out, it’s actually very dangerous for our country. What Hollywood is doing is a tremendous disservice to our country.”

Trump hadn’t actually seen The Hunt, of course. But he’d read the synopsis. A group of wealthy coastal elites kidnaps rural conservatives and guns them down, blows them up and impales them, all for sport.

Trump’s supporters howled in rage. Distributor Universal yanked the movie from its planned theatrical release. The furor subsided, and then coronavirus intervened. The Hunt like all March 2020 releases went straight to video.

Now the public can finally watch The Hunt, and hopefully see it for what it is. A taught, energetic, surprising and hyper-violent live-action cartoon that revolves around an incredible, hilarious lead performance by GLOW’s Betty Gilpin, and which has absolutely nothing to say about modern American politics except that extremists on both sides are idiots.

With a super-tight script by Cuse and Lindelof, who also wrote and ran HBO’s Watchmen series, The Hunt wastes no time getting to the point. Kidnapped white-nationalists, homophobes and Q-Anon-style conspiracy-theorists run for their lives as self-obsessed, wealthy liberals snipe at them from a bunker.

The violence is colorful, weird and very, very dumb. Like, purposefully dumb. And it cuts both ways when the deplorables finally turn the table on the elites. Jerks slaughtering jerks. In the middle of it all, there’s Gilpin’s Mississippi rental-car worker.

Gilpin deserves an Oscar for her work in The Hunt. With very few lines of dialogue, she conveys confusion, fear, weariness, annoyance and hard, murderous fury. It’s all in her wide, rolling eyes and the funny curl of her tight lips. And in her brutal, surprising action scenes.

Gilpin’s Crystal is the only sympathetic character in The Hunt. By design. She’s the only person on-screen who isn’t a caricature of a right-wing Trump-cultist or a vain, wine-swilling leftist.

The Hunt isn’t about killing deplorables. It’s about a woman who’d rather be anywhere else than stuck in the middle of a partisan screaming match. One that also happens to involve landmines and sniper rifles.

The Hunt is available on Amazon.