The 1 Thing the U.S. Marine Corps Must Do To Win the Wars of the Future 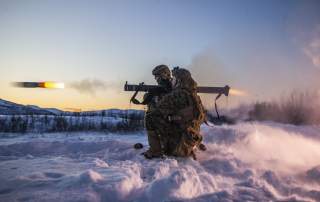 Forget transport planes, trucks and tank-killing armored vehicles. If the U.S. Marine Corps is going to be effective in future wars with major powers, it needs to ditch the heavy equipment and get lighter.

That’s the message from Marine Corps commandant David Berger. “We have to get rid of legacy things in the Marine Corps,” Berger said at the Reagan National Defense Forum in California on Dec. 7, 2019. “We’ve got to become expeditionary again, which we know how to do.”

Berger specified “big, heavy things” such as manned counter-armor systems as prime candidates for cut-backs, according to Defense News.

Also on the chopping block: “Big, expensive things that we can’t either afford to buy or afford to maintain over the life of it. Things that don’t fit aboard ship, things that can’t fire hypervelocity projectiles, things that can’t have, don’t have the range that we’re going to need, the precision, but are also mobile, expeditionary enough [that] we can operate from ship or ashore and move back and forth freely. Manned things, manned logistics vehicles, manned logistics aircraft — all those things we’re going to trim down.”

Berger’s push for a more nimble Marine Corps comes as Navy and Marines leaders are working on several overlapping force-structure assessments that could begin reshape the U.S. maritime services.

The Navy wants more smaller ships, including unmanned vessels, as well as a wider array of inexpensive transports to help spread out Marines during a high-end fight with Chinese or Russian forces armed with lots of anti-ship missiles.

The Marines meanwhile are defining a new “Expeditionary Advanced Base Operations” concept, whereby Marines would set up small, heavily-defended outposts at sea or on islands inside enemy missile range. The outposts would function as staging bases for rocket-launchers, stealth fighters and air-mobile infantry forces.

Berger made it clear that he doesn’t think certain weapons belong at those outposts. In calling out manned counter-armor systems, Berger might be referring to the Marines’ 100 missile-armed Light Armored Vehicles and 400 M-1A1 main battle tanks. An M-1 tips the scales at more than 60 tons, making it one of the heaviest single pieces of equipment that a Marine landing force ever carries into battle.

Heavy logistical forces also have no place at the expeditionary bases, Berger said. While fighting in Iraq and Afghanistan, Marine transportation units like their U.S. Army counterparts added bigger and heavier trucks with added armor for deflecting roadside bombs. In a littoral conflict with a major power, the trucks would be worse than useless -- they’d take up valuable space aboard transport ships. Logistics, Berger said, is “the area we’re farthest behind.”

Berger said the Marines must double down on robotic supply infrastructure. “Picture in your mind some kind of vehicle, unmanned, perhaps autonomous, but let’s just talk unmanned — [it] moves from this point to that point, whatever, on its own. Inside it, it’s got more unmanned systems, ground or air. It’s launching and recovering them, bringing them back as a mothership, coming back, and you have these all over the place.”

The Navy and Marines already have begun to experiment with unmanned surface vehicles, or USVs, for logistics mission. During the Valiant Shield war game in 2018, the Navy deployed a 12-foot Mantas USV for ship-to-shore transport.

That remotely-operated Mantas carried just 120 pounds of cargo, but the Navy and Marines have already ordered up bigger variants of the same USV for future experiments, including one model that’s 50 feet long and which presumably could carry thousands of pounds of cargo.

For aerial logistics, the Corps in 2018 began shopping for a transport drone that can haul 500 pounds over a distance of at least six miles. That drone like Mantas would function as a proof-of-concept. An operational cargo drone would need to be capable of carrying much heavier loads over much greater distances.

The technology is beginning to emerge that could support Berger’s vision of a lighter Marine Corps. But reorganizing the force could require some hard choices. Writing for the Center for International Maritime Security, Marine officer Walker Mills called on the Corps to consider cutting some of its 24 infantry battalions and most if not all of its tanks and tube artillery.

The manpower the Marines could free up with these cuts should shift into rocket and aviation units that are better suited for future island-hopping campaigns, Mills wrote.