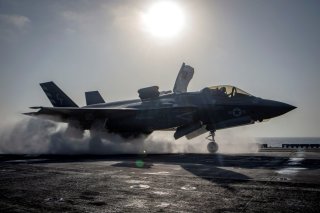 After beginning conceptual work and testing on its Joint Strike Fighter prototype in 2000, Lockheed Martin began producing the F-35 in 2006. The F-35’s two-decade-long history raises an important and provocative question. Could the F-35 fly for a century?

Is it possible for the aircraft to remain relevant, effective against threats, and potentially even superior to other fighters well into the 2080s and beyond? This might seem outside the realm of possibility at first. However, it merits a closer look for a number of key reasons.

It is important to note that the B-52 bomber and the CH-47 Chinook helicopter have both received significant upgrades throughout the years. As a result of these upgrades, today’s B-52s and Chinooks are almost entirely new aircraft and may be able to operate for 100 years. These upgrades have been the key to their longevity.

What about a stealth fighter such as the F-35A? Many technological innovations in the future will likely pertain to software, mission systems, sensors, and radar-absorbent stealth coating materials. This means that the basic structure of the airframe itself could remain intact, while the technological properties of the F-35A could be continuously enhanced and updated.

Future technological advances will allow F-35s to receive paradigm-changing upgrades that will give the fighters the capabilities of a completely new aircraft. For example, F-35s would greatly benefit from improved high-fidelity sensors, networked course-correcting precision munitions, cyber network hardening, and “smart skins” with built-in mission systems. Taken individually, each of these enhancements could help create a “new” F-35 without requiring major adjustments to the airframe itself. More importantly, an F-35 with all of these enhancements would be transformed into an aircraft with entirely new capabilities. This possibility, which is not dependent on changes to airframe configurations, is why many regard the F-35 as the world’s best multi-role fighter.

These continual upgrades are feasible because engineers and weapons developers have had them in mind for years. The Pentagon’s Continuous Capability Development and Delivery (C2D2) process aims to build upon and extend the common technical infrastructure that Lockheed Martin engineers originally developed for the F-35. C2D2 uses common standards, computing technology, and upgradeable software to quickly integrate new technologies as they emerge. Crucially, these modernization efforts don’t necessarily require changes to the F-35’s hardware.

This modernization process, which primarily relies on the integration of new software “drops” or increments, has already been underway for years. This is the reason, for example, that with Block IV software, the F-35 will soon be able to fire the network-enabled Stormbreaker bomb. In recent years, new weapons, avionics, and mission systems have emerged with every new software drop. As the upgrade process will be faster in the coming years, software improvements will be continually implemented when possible.

The F-35’s well-known “sensor fusion” process may be the most important advancement within the F-35 program. This process aggregates and analyzes otherwise disparate pools of incoming sensor data, targeting information, and navigational specifics to give pilots vital information on an integrated screen. Air Force scientists have explained that this is an early iteration of artificial intelligence.

The F-35 is already regarded as a “flying computer,” and its superiority may largely be due to its advanced computing and data processing capabilities. This superiority could allow the F-35 to fly beyond the Pentagon’s target date of 2070 and stay in use for close to 100 years.