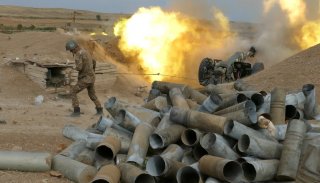 The outbreak of war last week between Azerbaijan and Armenia increasingly appears to have been the result of a coordinated military gambit by Azerbaijan and Turkey. The reported involvement of Turkish-sponsored jihadists from Syria and Libya in the battles for the contested territory of Nagorno-Karabakh and beyond has dramatically raised the stakes in the decades-old conflict in the South Caucasus.

Driven by a complex set of domestic political motives and fraught history, the conflict now resembles the 1973 Arab-Israeli Yom Kippur War much more than it does any of the other conflicts in the former Soviet periphery, such as Crimea or South Ossetia.

This is cause for concern, but history may also point the way to a durable peace. What will be needed after the guns fall silent is nothing short of a comprehensive process leading to the equivalent of Camp David Accords between Azerbaijan and Armenia.

For Azerbaijan’s autocratic president Ilham Aliyev, the military gamble against Armenia is an enormous one, just as the October 1973 decision to attack Israel was for Egypt’s Anwar Sadat and Syria’s Hafez al-Assad. For both Sadat and Assad, a military victory against Israel was at least as vital for diverting from popular discontent, economic distress, and palace intrigue at home as it was for strictly territorial concerns. These same factors are central to Aliyev’s calculus today.

As the product of a post-Soviet hereditary succession in one of the most closed societies in Eurasia, Azerbaijan’s Aliyev has struggled to consolidate legitimacy in an authoritarian milieu that is every bit as byzantine and ruthless as that of Egypt or Syria in the 1960s and 1970s. A boom-and-bust economy in which oil and gas account for over 90 percent of exports has atrophied, stoking popular fears of a sharp currency devaluation of the sort that crippled the economy in 2015 (and presaged military offensives a few months later that were remarkably similar to those this week). A power struggle between ruling clans in Baku has intensified this year, as has a broad crackdown on journalists, civic organizations, anti-corruption activists, and opposition groups, many of which have been ominously branded by Aliyev as “worse than the Armenians.”

In 1973, Egyptian President Anwar Sadat hoped that even limited success on the battlefield would alter the status quo, redressing the humiliations of defeat in earlier Arab-Israeli wars, and strengthening his position in negotiating with the Israelis. Azerbaijan’s Aliyev has sometimes articulated similar motives in pressing for war. Grievances predicated on the humiliation of prior military losses to the Armenians feature prominently in state propaganda.

But just as often, pronouncements from Baku are more reminiscent of the maximalist pre-1973 positions of Syria’s Assad, which reprised eliminationist anti-Semitism for political ends. As Thomas de Waal, a scholar and specialist on the conflict, has noted, “Azerbaijan has wasted years in denunciations of ‘Armenian aggression’ without ever offering the Armenians of Nagorno-Karabakh credible guarantees that it respects their rights and does not merely wish to destroy them.”

For Israel, the 1973 conflict was a war of national survival in ways that it was not for either Egypt or Syria. This week’s war in the Caucasus has already assumed comparable meaning for Armenia in light of Turkey’s explicit involvement.

While the 1973 Arab-Israeli war saw the United States and the Soviet Union back their respective allies, support was often transactional and framed by the broader Cold War context. In contrast, the support of Turkey for Azerbaijan against Armenia is fraught in ways that are deeply rooted in the collective experience of the Armenian Genocide.

When President Recep Tayyip Erdogan, in the runup to preparatory Turkish-Azerbaijani military exercises this year, turned to a favorite phrase in referring to Armenians—“kilic artigi,” or “remnants of the sword”—the message was not just a dog whistle to an ultranationalist base or to Azerbaijani allies. As Genocide Watch cautioned, it reflected an evolution of mindset on the Armenian Genocide, from one of crude denial to an explicit “pride of the perpetrators.” It is the rhetorical equivalent of a German leader taunting Israelis as remnants of Nazi extermination camps. The leap to viewing the entirety of modern Armenia as a “remnant of the sword” is not great.

Turkey’s singular unrepentance for the twentieth-century genocide remains today the most elemental obstacle to peace. It is little appreciated that many of modern Armenia’s statespersons, including presidents and foreign ministers, and more than half of Armenia’s adult population, are children or grandchildren of survivors of that genocide. The perceptual lens of national survival through which Armenia’s leaders experience the current war is the same as the one that conditioned Israeli actions in the 1973 Yom Kippur War and its aftermath.

The Armenian Genocide is not a footnote to the Armenian-Azerbaijani conflict; it is at its core.

As with the Arab-Israeli conflict, the broad contours of a political resolution to the dispute between Azerbaijan and Armenia have been apparent for years: an unwinding of Stalin-era territorial gerrymandering, the return of displaced populations, and a subsequent harmonization of interstate borders. And as with Israel in the Middle East, physical security and defensible borders are paramount for Armenia amidst an enduring existential threat from an unrepentant Turkey.

The aftermath of the 1973 Arab-Israeli war paved the way for five years of intensive diplomacy that led to the Camp David Accords and the Egypt-Israel peace treaty. In the end, Egypt’s Anwar Sadat returned through diplomacy the territory that he had failed to obtain through war. It may be difficult today, but not impossible, to imagine Azerbaijan’s Ilham Aliyev and his Armenian opposite taking up the mantle of Sadat and Israeli Prime Minister Menachem Begin in the not distant future.

All of which presents an uncommon opportunity for global cooperation in this strategically important region. As has been considered recently, the United States, Russia, and Europe have a rare convergence of geopolitical interests in a renewed push for Armenian-Azerbaijani peace. Jimmy Carter, the visionary of the Camp David Accords and Middle East peace, would undoubtedly agree.

Anna Ohanyan is the Richard Finnegan Distinguished Professor of Political Science and International Relations at Stonehill College in Massachusetts, and a two-time Fulbright Scholar to the South Caucasus. Her latest books are Russia Abroad: Driving Regional Fracture in Post-Communist Eurasia and Beyond, published by Georgetown University Press in 2018, and Armenia’s Velvet Revolution, published by I.B. Tauris in 2020.