In 1983, America and Russia Almost Went to War (Millions Would Have Died) 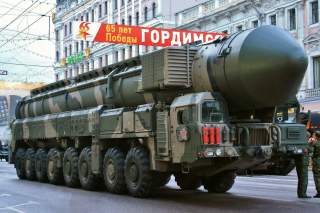 The president of the United States recently announced his belief that “Our relationship with Russia has NEVER been worse thanks to many years of U.S. foolishness and stupidity . . .” Strange rhetoric emanating from Washington these days often calls to mind (among other things) 1984. But those interested in some historical perspective on U.S.-Russia relations would do well to reflect for a few minutes instead on 1983.

In the year the current president was opening Trump Tower and purchasing the ill-fated New Jersey Generals football team, the Cold War reached one of its chilliest (and final) peaks. Consider a brief overview of events that historic year.

On March 8 in a speech to the National Association of Evangelicals, President Ronald Reagan first brought the term “evil empire” into the lexicon of international relations, a morally weighty invective that set the tone for the era. Later the same month, Reagan announced the creation of the Strategic Defense Initiative (SDI). Quickly dubbed “Star Wars,” the program’s vision of space-based missile defenses would produce little in the way of fielded military capabilities but much in the way of Kremlin anxiety over U.S. technological audacity.

Star Wars further soured the already miserable state of U.S.-Soviet arms control efforts. And then in the summer of 1983, U.S. intelligence uncovered evidence of Soviet violations of the Anti-Ballistic Missile Treaty. The offending radar installation near the city of Krasnoyarsk seemed to validate the mistrust of Soviet good faith held by arms control skeptics. The issue remained a burr in the arms control saddle until Mikhail Gorbachev finally agreed to dismantle the facility in 1989.

Then, on September 1, 1983, Soviet fighter jets intercepted a Korean Airlines 747 in Soviet airspace and shot it out of the sky with 269 passengers and crew aboard. Sixty-one Americans perished on KAL flight 007, including a Congressman from Georgia. In a particularly offensive move, Soviet leader and former KGB officer Yuri Andropov accused U.S. intelligence agencies of deliberately provoking the incident to stoke anti-Soviet sentiment. (Thirty-one years later, Russian president and former KGB officer Vladimir Putin would emulate Andropov’s false flag fulminations when Malaysian Airlines flight 17 was shot down over Eastern Ukraine.) The ensuing recriminations exacerbated escalating Kremlin fears of conflict, with Andropov declaring that the United States was on “a militarist course that represents a serious threat to peace... If anyone had any illusion about the possibility of an evolution for the better in the policy of the present American administration, recent events have dispelled them completely.”

Perhaps the most harrowing events of 1983 were yet to come, though it would be many years before most people knew it. In the wee hours of September 26, the Soviet missile warning system triggered an alarm indicating that five U.S. nuclear missiles had just launched at Soviet territory. It was only because of the watch officer’s gutsy guess that the alarm was caused by a computer glitch that Politburo members were not awoken to the news that an American nuclear strike would be landing in a few minutes.

Then in early November, only a week after America’s unexpected invasion of Grenada toppled its Marxist regime, the North Atlantic Treaty Organization (NATO) began a command-post exercise in Europe called Able Archer. The exercise simulated preparations for a major nuclear attack, but the Soviets came to believe the preparations were real and responded with heightened alerts of their own nuclear forces. Key officials on both sides recognized the danger in time to curtail further escalating alerts, but the incident probably brought the world closer to nuclear war than at any point since the Cuban missile crisis.

This “war scare” would ultimately prove to help Reagan understand the severity of the gathering risk in U.S.-Soviet nuclear competition. But that would take a few years to bear fruit. Meanwhile, 1983 closed out with the deployment to Europe of new and controversial American nuclear missiles. The intermediate-range Pershing II missiles, fielded in response to similar systems that the Soviets had already deployed, had flight times under fifteen minutes. This was, as one senior U.S. intelligence official at the time noted, “roughly how long it takes some Kremlin leaders to get out of their chairs, let alone to their shelters.” Gorbachev later referred to the missiles as “a gun to our head.”

1983’s zeitgeist of mortal danger was reflected in Hollywood as well. “War Games” was a box office hit that summer, depicting a teen computer hacker accidentally hijacking the American nuclear arsenal. That fall—only days after Able Archer concluded, we now know—the TV movie “The Day After” broke rating records as tens of millions of U.S. households watched the story unfold of a nuclear holocaust in the American Midwest.

Looking back at the early 1980s more broadly reveals a number of historical “rhymes” that should resonate with those wondering what to make of today’s Russian-American tumult.

Then, as now, several years of fitful but genuine progress toward cooperation ("détente" and "reset") had come to a cropper. Then, as now, arms control had fallen victim to the broader relationship deterioration. Then, as now, there was a general sense of a military balance shifting away from U.S. favor. Then, as now, intermediate-range missiles were a particular point of contention in that shifting balance. And then, as now, the Pentagon was investing in new military technologies aimed to "offset" adversary advantages (the "second offset" of precision-strike and stealth and the "third offset" of robotics, artificial intelligence, hypersonics, and the like).

Mikhail Gorbachev remarked in 1986 that “Never, perhaps, in the postwar decades was the situation in the world as explosive and hence, more difficult and unfavorable, as in the first half of the 1980s.” Political leaders and opinion makers should reflect on this history as they stew over the present East-West tangle. Doing so will not only temper fears over the level of danger at hand. It will also help to recall the possibility of significant change. Only six years after the combustible course of 1983, the Berlin Wall was en route to museums in broken pieces. And only a few years after that, the Soviet Union, itself, had occupied its reserved plot on the ash heap of history.

To point this out is neither to minimize the current troubles nor to predict their swift resolution. The upcoming peaks and valleys of the U.S.-Russian relationship may not be visible from here, but it should help to remember that America and Russia have been navigating rocky terrain together for a long time.

Michael Fitzsimmons is Visiting Research Professor at the Strategic Studies Institute, U.S. Army War College. The views expressed are those of the author and do not necessarily reflect the official policy or position of the Department of the Army, Department of Defense, or the U.S. Government.