.22LR Wrangler: A Single Action Revolver That Deserves Your Respect 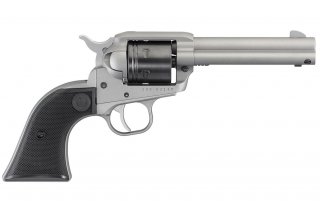 Since its introduction onto the market last year the Sturm, Ruger & Company, Inc. Wranger single-action revolver has clearly been well-received with shooters. As of the end of June, the handgun topped the list for the best-selling revolvers to those under the age of fifty and came in second in the category—only after the hugely popular Colt Python—for shooters above the age of fifty (Source: National Shooting Sports Foundation data).

The .22LR Wrangler was built on the legacy of the popular Ruger Single-Six, and was designed to complement the company’s legendary history of producing quality, rugged and most importantly reliable single-action revolvers. The original Single-Six .22 was introduced in 1953—at a time when cowboy shows were on TV—and that has been credited with saving the single-action design from riding off into the sunset like those on-screen heroes.

Despite being based on a design that harkened back nearly one hundred years, Bill Ruger modernized the firearm with the use of modern investment casting, which resulted in a new level of affordability for single-action revolvers. The company has further taken this forward with twenty-first century CNC-machining methods and lean manufacturing techniques, as well as the use of a new aluminum alloy cylinder frame. This has allowed the Wrangler to maintain the affordability while still maintaining the rugged reliability of the original Single-Six.

It is also easy to see how in just the past year the Wrangler has become a safe handgun to introduce new shooters to the sport, while still being an affordable platform for more experienced shooters for a day at the range.

The Wrangler featured a frame machined out of aluminum, and it was introduced in three Cerakote models, including black, silver and bronze. The Wrangler was made available with standard synthetic checkered black grip panels, but those could be swapped out for Single-Six panels to create a retro-looking revolver.

“Our ultimate goal was to provide yet another rugged reliable firearm to our customers at an affordable rate,” Graham Rockwell, product manager at Ruger’s Newport, New Hampshire, plant, told Handguns Magazine. “With the Single-Six as our starting point, we saw an opportunity not only to use different materials but also to bring our single-action manufacturing process up to a modern level. Those two things combined are really what set the Wrangler apart from the rest of our single-action line as far as affordability.”

While it is safe to say that the Ruger Wrangler could never truly be compared to a vintage Colt Single Action Army or Peacemaker, for the money this has remained a cost-effective option for those who want to enjoy some cowboy-style shooting. With an MSRP of just $249, it would be hard to go wrong with the Wrangler.