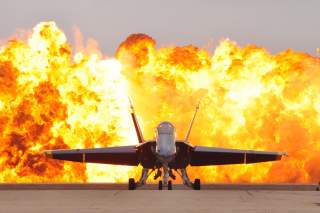 Winston Churchill once wisecracked that the politician’s job is to predict what will happen—then explain why it didn’t. More to the point, George Orwell mocked “the unsinkable Military Expert” who keeps venturing strong predictions about martial affairs, keeps getting forecasts wrong, and keeps drawing “fat salaries” despite repeated failures as a soothsayer. Be humble when prophesying—lest the ghosts of wars past appear before you and terrify you!

In that spirit of humility, my Five National Security Predictions for 2019:

China has a dream, as President Xi Jinping likes to say. More accurately, the Chinese Communist Party has a dream that it has thrust on the Chinese people. Party potentates will continue pushing toward that dream along parallel diplomatic, economic, and military tracks. Beijing has found footholds throughout the Indo-Pacific region through the Belt and Road Initiative (BRI). The BRI supplies regional governments with funds for infrastructure development in hopes of resurrecting the maritime and landward Silk Roads of old. Naval bases could follow, playing host to Beijing’s many surface and subsurface warships. China has whittled away at freedom of the sea in Southeast Asia, arming artificial islands, and installing surveillance gear to maintain a virtual presence throughout the South China Sea. Moreover, Beijing is taking an increasingly aggressive stance vis-à-vis U.S. Navy demonstrations on behalf of navigational rights. There is little reason to expect China to refrain from such efforts to fulfill its dream unless internal woes impose self-discipline or geopolitical rivals push back hard.

2. China starts bumping up against its limits:

Some evidence indicates China’s rise to great power is indeed flattening out. Beijing took on an enormous debt load to ride out the Great Recession. Additionally, their economy is no longer expanding at the exhilarating rate common during the early days of Deng Xiaoping’s reform and opening project. Also, the party is erecting an Orwellian superstate complete with re-education camps and a “social credit” score that punishes anyone who shows the slightest sign of deviating from the party line. Economic vitality is the substructure on which strategy is built, as statesmen from the Peloponnesian War onward have known. Money funds armed forces and sustains them in the field for long stretches. That means the fewer yuan China has, the less aggressive their strategy. Meanwhile, a ruling party that feels the need to impose totalitarian social controls is not a confident party. Beijing may fear rank-and-file Chinese citizens don’t share its vision of perpetual Chinese Communist Party rule. Yet Beijing’s worries about domestic unrest could divert resources from foreign military adventures. Let’s hope so.

3. America gets its game face on:

The picture for the Trump administration’s defense buildup has blurred with the changeover of power in the U.S. Congress. Still, good things are happening—especially on the weapons-development front. The U.S. Air Force expects to deploy the brand-new long-range anti-ship missile, or LRASM, on its bombers this coming year—furnishing just the latest evidence that the Air Force and Army have embraced their roles as maritime fighting forces. U.S. Navy carrier fighter/attack planes will soon carry the LRASM as well. The Navy has resumed arming its nuclear-powered submarines with Harpoon anti-ship missiles, boosting their striking range against surface vessels by roughly sevenfold compared to torpedoes, their standard armament for many years. Software engineers are repurposing the Tomahawk cruise missile for anti-ship missions, and thus reinventing a long-range capability that should never have been allowed to lapse. And on and on. These are some of the projects begun during the Obama years that continued into the Trump years and are now coming to fruition. They will hand political leaders a formidable panoply of arms to push back against Chinese, Russian, or Iranian overreach. One hopes Washington will brandish its new Big Stick to good effect.

4. Others take ownership of their security:

American allies and security partners are getting their game face on as well. To list just a few examples, the Royal Australian Navy is preparing to deploy its last Hobart-class Aegis destroyer, amplifying the RAN’s capabilities across multiple warfare domains. Tokyo is preparing to modify the latest Japan Maritime Self-Defense Force “helicopter destroyers” to carry F-35 stealth jets, and it roughly tripled the number of F-35s it wants to procure. New Delhi is instituting a more offensive-minded deterrent posture along the Sino-Indian land frontier, replying to the Chinese infrastructure-building spree that could support offensive ground operations against India. Etc. Governments and societies are getting serious about the new normal of great-power strategic competition. The more allies tend to their own defenses, the more equal their alliances and partnerships with America. And alliances of equals tend to prove more durable than hegemonic alliances in times of extreme stress—witness the Grand Alliance that fought World War II or the Atlantic Alliance that outlasted the Soviet empire. The United States must remain faithful to allied defense—but as first among equals rather than the dominant security partner.

Russians have long fathomed the power of land-based maritime defenses, and they routinely mate the latest technology to defensive strategy to hold enemy fleets and air forces at bay. The result is what Soviet strategists called a “blue belt of defense,” a buffer against seaborne attack. The blue belt extends as far offshore as the range of the shore- and sea-based platforms that put teeth into it. It can also include “defenses” as mundane as the bridge spanning the Kerch Strait—civil infrastructure that Russian security services have started using as a barrier to Ukrainian maritime movement to and from the Sea of Azov, an inlet in the Black Sea. Moscow craves control of geographic space adjoining Russia’s borders, and that includes maritime space. Preserving Western nautical primacy demands that Western sea services devise methods and technology to operate within that blue belt. Meanwhile, 2019 is shaping up as another rocky year for beleaguered Russian neighbors such as Ukraine, which finds its Azov seacoast under a de facto naval blockade. The old contest for maritime and landward supremacy in Eurasia resumes anew.

This is my upbeat though hardly unmixed prognosis. And may Military Experts remain forever unsinkable.

James Holmes is J. C. Wylie Chair of Maritime Strategy at the Naval War College. His latest book, the second edition of Red Star over the Pacific, appeared this month. The views voiced here are his alone.