$73 Million Is Missing From South Sudan’s Coffers: Corruption or Conspiracy? 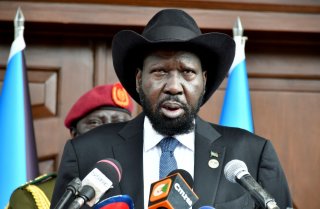 On Thursday, the United Nations released a report accusing South Sudan’s elite class of stealing tens of millions of dollars from the poor and war-torn country. It concluded that $73 million had disappeared from public coffers since 2018, with $39 million stolen in the span of two months—a “staggering” amount. The UN warned that large-scale theft had the potential to endanger South Sudan’s shaky peace process, describing it as a “key driver of the ongoing conflict.”

On Monday, South Sudan responded to the report by accusing it of bias. Martin Elia Lomuro, the Minister of Cabinet Affairs, accused the UN of fomenting an “international campaign” to destabilize South Sudan and its government. Lomuro stated that the UN intentionally sought to keep South Sudan weak and unstable so that it could justify continuing to request funding.

“These are organizations that are sponsored not to see political stability,” he added, before underlining that the people of South Sudan would be responsible for enacting political change, rather than the international community.

The UN report admitted that the $73 million probably vastly understated the scale of theft from South Sudan’s treasury. It noted that President Salva Kiir, now entering his tenth year as South Sudan’s president, admitted in 2012 that at least $4 billion had been stolen from the country.

South Sudan’s GDP is roughly $1 billion, according to the World Bank.

The UN report implicated a range of actors in the thefts, including government officials, military personnel, multinational corporations, and bankers. It suggested that most of the theft occurred in South Sudan’s oil sector, which has consistently failed to adopt independent oversight mechanisms to oversee total production and revenue collection.

A press release put out by the agency highlighted a May 2018 payment by the South Sudanese Ministry of Finance to Ashram Seed Ahmed Hussein Ali, sometimes known as “Al-Cardinal” for his reputation as an oligarch. The payment represented “a staggering 21.6 percent of South Sudan’s total budget for the ‘Use of Goods and Services’ and ‘Capital Expenditure’ for the entire 2018/2019 fiscal year.”

South Sudan is tied for last on Transparency International’s 2020 corruption index, alongside Somalia. Though it has historically survived on subsistence farming and animal husbandry, the overwhelming majority of its GDP comes from the oil trade. However, oil revenues have largely been kept by the country’s elite, and have failed to improve the quality of life for most South Sudanese.