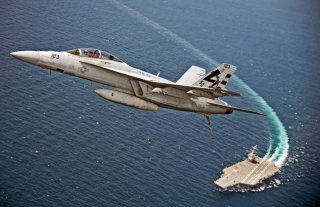 The Navy’s first-of-its-kind Electromagnetic Aircraft Launch System (EMALS), installed on the USS Ford carriers over a period of many years, has now launched fighter jets from the ship’s deck as many as 8,000 times, a milestone marking the progressive emergence of a new kind of aircraft propulsion system for carrier-jet take off to replace existing steam catapults.

The 8,000 take-offs and landings have involved F/A-18 Super Hornet jets, E-2D Hawkeye aircraft, C-2 Greyhound carrier transports, and EA-18G Growlers, among others. Emerging from years of scientific research and innovation, EMALS is changing the paradigm for fighter-jet take-off with a smoother kind of ship-deck propulsion system designed to enable an improved continuous launch of growing electromagnetic force and reduce wear and tear on aircraft.

The development of the EMALS goes back more than a decade, as General Atomics was awarded a deal to develop the system in 2009. As a breakthrough technology, the system evolved through a series of adaptations and improvements as Navy and industry developers worked to integrate a previously unprecedented technology. Component deliveries of EMALS were underway as long as ten years ago.

The integration of EMALS into the USS Gerald Ford was a complex, detailed, and lengthy process. Metal decking had to be placed over the trough of the flight deck and cabling and linear induction motors were also installed onboard the ship.

The purpose of these linear induction motors, a Navy weapons developer said, is to generate a “sequentially activated rolling magnetic field or wave” able to thrust and propel the aircraft forward.  The Navy program manager said the electromagnetic field acts on a 22-foot long aluminum plate, running in between stationary sections of twelve-foot linear motors.

“Electricity runs through the two sides of the motors, creating an electromagnetic wave. The aircraft motors are kicked in at the beginning. There’s a hydraulic piston that pushes a shuttle forward. The shuttle is what connects to the aircraft launch bar,” the Navy Program Manager told The National Interest several years ago during an earlier portion of the construction of the USS Gerald Ford.

One Navy developer, years ago, explained EMALS in terms of a steady progressive smooth process, as opposed to what he described as more of a “shotgun” type thrust coming from traditional steam propulsion.

EMALS is engineered to be both steady and tailorable, meaning it can adjust to different aircraft weights and configurations.  This is particularly useful because the amount of thrust needed to launch an aircraft depends upon a range of interwoven factors to include size, shape, and weight of the aircraft, wind speed on the carrier deck, and the speed of the aircraft carrier in the water, Navy engineers explained.