The AC-130's Upgraded Cannon Is Bringing the Heat 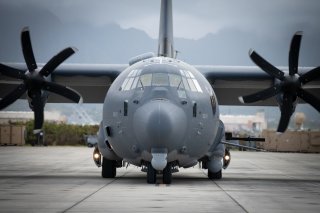 A series of photos from a recent event at Cannon Air Force Base in New Mexico show a few glimpses of the U.S. Air Force AC-130J Ghostrider, a powerful gunship that is designed to support troops on the ground with an array of powerful cannon weaponry.

The statement explained “previous iteration of the AC-130’s 105mm gun system comprised the M102 Howitzer and M137A1 recoil mechanism, which are no longer supported by the Army, meaning that an upgrade was necessary due to obsolescence and advancements in technologies since the original recoil mechanism was designed.”

It added that expressly from the outset of the design process, “engineers behind the 105 mm gun worked directly with the warfighter to get real-time feedback from experienced gunners and technicians.”

“The upgrades to the 105mm GAU are sweeping, however, the engineers at Dahlgren were careful to ensure that the functionality, accuracy and usability of the weapon remain largely the same.”

Though the AC-130’s upgrade will undoubtedly benefit the platform as well as the warfighter on the ground receiving gunship support, questions about the platform’s ultimate longevity have been raised—especially in light of more sophisticated challenges pilots can expect to face in the future.

During the United States’ involvement in the Middle East, in places like Iraq and Afghanistan, pilots had very little to fear from the ground, as American forces enjoyed nearly total air superiority. Control of the skies, however, is not guaranteed in the future.

Following the United States’ exit from the Middle East, China and Russia have become the primary challengers to the American-led international order. And unlike non-state opponents such as the Islamic State, both Russia and China pose robust anti-aircraft capabilities that could spell disaster for platforms like the AC-130J.

So while the Ghostrider is more powerful than it has ever been, it is also more vulnerable than ever, thanks to the types of challenges it could expect to face in the future.