Adapt or Die: The A-10 Warthog Is Not Fleeing the Great Power Fight 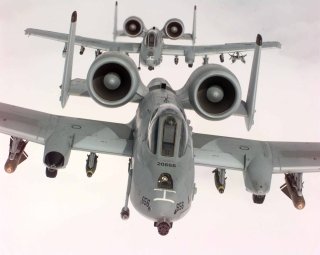 The U.S. Air Force is moving to divest as many as 260 A-10 Warthog aircraft to pursue alternative platforms for Close Air Support (CAS) given that the famous “flying tank” has become unable to maintain its effectiveness in new high-threat environments.

However, the A-10 is not disappearing quickly, and debate about its utility to the Air Force continues to surge among lawmakers and other advocates for the combat-tested, highly survivable aircraft known for saving lives in combat.

The aircraft’s future has long been debated, as many have argued that high-speed fighter jet aircraft such as the F-16 Fighting Falcon, F-22 Raptor, and F-35 Joint Strike Fighter are well suited to absorb the CAS mission. Air Force secretary Frank Kendall recently told the House Appropriations Subcommittee on Defense that the service does intend to retire the aircraft over time.

“We do intend to divest the A-10 and replace it with F-16s. The problem is it is an old aircraft not designed for an environment we face now and survivable against modern threats,” Kendall told Congressional leaders.

Years ago, the Pentagon conducted a specific fly-off between the A-10 and F-35 to assess each platform's ability to perform the CAS mission given their different attributes. The A-10’s titanium hull enables the aircraft to absorb massive amounts of small arms fire and its built-in redundancy allows the aircraft to continue operating after being damaged in war. The A-10 also has an ability to “hover” above ground combat and deliver impactful air fire upon dismounted enemy forces in close proximity to advancing soldiers. The aircraft also has an aligned 30mm cannon right below its nose to exact a lethal impact with direct fire upon enemy ground forces. These are merely a few of the reasons why the A-10 has been revered by ground forces for decades and credited with saving countless lives.

At the same time, an F-35 fighter has a set of unique attributes of potential impact for CAS operations, such as its long-range sensors and high-speed maneuverability. For instance, an F-35 may be able to deliver devastating ground attacks on enemy forces using its weapons and long-range sensors, without having to descend within range of small arms fire. The F-35 could also leverage its speed and maneuverability to elude enemy fire to a greater extent than an A-10 could. However, even though an F-35 may not “have” to face as much small arms fire, it is an open question whether the high-tech aircraft could withstand it. Nonetheless, fighter jets such as the F-16 and even the F-22 demonstrated their ability to provide effective CAS in the fight against ISIS in 2014. One thing that is surprising, however, is that Kendall mentioned replacing the A-10 with the F-16 for the CAS mission, rather than the F-35. In the past, service leaders have emphasized the possibility of using the F-35 for CAS. Perhaps that is still the case, as even an upgraded F-16 is still a fourth-generation, non-stealthy, older platform.

Some members of Congress remain concerned that the Air Force’s decision to phase out the A-10 will decrease the number or aircraft receiving wing replacements. Several members of the House subcommittee argued that the current war in Ukraine underscores the critical need for platforms such as the A-10, and even suggested that the A-10 can remain effective in major high-threat, great-power war engagements.

“The A-10 gun system is capable of defeating modern armor and is well suited for agile combat employment roles. It can continue to deliver massive rapid firepower on enemy vehicles in a contested environment. There remains a mission for the A-10 beyond counterinsurgency,”  Rep. Ann Kirkpatrick (D-AZ) told Kendall and Brown.