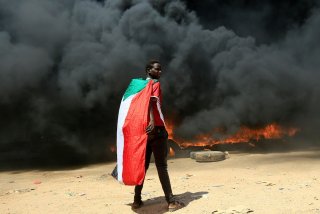 The African Union (AU), the international organization of all African states, suspended Sudan’s membership on Wednesday following its military coup two days prior.

The organization’s Peace and Security Commission announced the move in a communique, stating that the organization had resolved to “suspend, with immediate effect, the participation of the Republic of Sudan in all AU activities until the effective restoration of the civilian-led Transitional Authority.”

While the suspension was not permanent—it was promised that Sudan’s membership would be restored after the restoration of the civilian government of Prime Minister Abdalla Hamdok—it was an early indication of the group’s strong opposition to the actions of General Abdel Fattah al-Burhan, the military leader who took power after the coup.

Other governments and international organizations have issued similar condemnations, and the United States—as well as Germany and the World Bank—has frozen all development and humanitarian aid to the country, preventing the new government from accessing a planned $700 million aid package tied to the country’s previously-successful democratic development.

Al-Burhan claimed that he had launched the takeover (which he vigorously denied amounted to a military coup) in the interest of safeguarding Sudan’s democratic transition from civil war. He also claimed that the country’s scheduled July 2023 elections would still be held. However, protests erupted immediately after the putsch, resulting in violence in Khartoum and its sister city, Omdurman. The country’s civilian pro-democracy activists took to the streets, aided by the Sudanese Professionals Association, the country’s largest trade union, and several pro-Hamdok branches of the government that al-Burhan’s forces had not initially seized, including the country’s Ministry of Information. Workers at the state-owned oil company, Sudapet, also announced that they would stop working and join the protests—a significant development, as Sudan’s petroleum industry accounts for more than nine-tenths of the government budget.

It is unclear what effect these developments will have on al-Burhan’s actions, although he announced in a press conference on Tuesday that he had released Hamdok, who had been placed under arrest after refusing to cooperate with the coup, to his home. (Al-Burhan's troops continue to guard him there.)

Sudan’s suspension from the African Union makes it the third country to be removed from that organization in 2021, preceded by Mali in May and Guinea in September—both of which were also suspended for military coups.