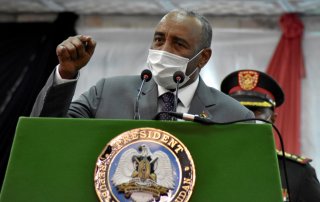 Abdel Fattah al-Burhan, the commander of Sudan’s armed forces and the current leader of Sudan following a successful coup d’etat on Monday, defended his actions to the press at his first news conference since the takeover.

Burhan claimed at the conference that the previous government, led by Sudanese economist and UN official Abdalla Hamdok, was unstable and threatened to plunge the country into civil war by inciting demonstrations against the military the previous week. Burhan argued that the military’s actions did not amount to a coup, and claimed that he did not intend to keep power, but had taken control of the country to restore stability.

Thus far, Burhan has failed in this task. Protests in Khartoum and the neighboring city of Omdurman have continued for two days, despite a crackdown and a number of civilian casualties. The existing political parties, some of which had their leaders arrested during the coup, have refused to cooperate with the new government, and the country’s largest trade union, the Sudanese Professionals Association, has declared the Burhan government illegitimate and has called for protests and a general strike until Hamdok is restored to office.

Burhan revealed that the prime minister, who had been arrested after he refused to cooperate with the coup’s leaders, had since been returned to his home in Khartoum. It is unclear if he remains under house arrest.

In his two days in office, Burhan has dissolved Sudan’s Sovereignty Council, the collective head of state following the overthrow of Sudanese dictator Omar al-Bashir in 2019. The Sovereignty Council had brought together civilian and military leaders in an uneasy alliance; to prevent military domination of the country, each of its members had been forbidden from running in the country’s next elections.

The rest of the world has overwhelmingly rejected the coup, and international donors have threatened to cut Sudan off while military rule persists. The United States has already done so, announcing the suspension of a $700 million aid package on Tuesday. Germany also announced that no further aid would be given until Hamdok was returned to office.

The Sudanese coup d’etat is the fourth high-profile seizure of power, after a February coup in Myanmar overthrowing controversial former Nobel laureate Aung San Suu Kyi, a May coup overthrowing the government of Mali, and a September coup in Guinea. UN Secretary-General Antonio Guterres complained that 2021 had led to an “epidemic” of coups.