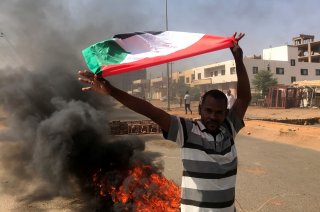 Burhan, who had previously led Sudan’s dual civilian-military “Sovereignty Council,” publicly justified his seizure of power by claiming that prior instability was threatening to topple the existing Sudanese transitional government—a patchwork of Sudanese civilian and military leaders, brought together after the 2019 protest movement that ousted long-time dictator Omar al-Bashir from power.

If Burhan had not acted, then the military was scheduled to hand over power to a fully civilian government by 2024, following democratic legislative elections in late 2022 or 2023. Burhan publicly proclaimed that, although the new government would rewrite parts of the constitution and create another legislature, the transition would continue under the guidance of the military; he committed the country to elections in July 2023 and promised that civilian leadership would be restored to power by the end of the transitional period.

There is little evidence that most Sudanese believe him. In spite of the military’s security measures—according to local reports, roads and bridges throughout the capital had been occupied by military vehicles, the Khartoum airport had been closed, and the Internet had been disabled—protesters quickly flooded the streets in the aftermath of the overthrow, blocking roads and setting fire to tires in Khartoum and neighboring Omdurman. In response, military units cracked down on protesters, resulting in at least seven civilian deaths.

Sudan’s contentious politics have given rise to a number of protests since the ouster of al-Bashir in 2019. The dual nature of the country’s transitional government, which drew partially from civilian protesters and partially from the military leaders who forced him out, led to popular suspicions that the military would seek to preserve its own power rather than voluntarily handing it over to civilian leadership. An earlier failed coup attempt in September 2021 did little to dispel these notions, although al-Burhan had not participated in that attempt and had condemned the plotters.

Although al-Burhan the coup’s leaders arrested Hamdok and seized key organs of state, including the state-run radio and television headquarters, it appeared as though their control was not complete by Monday morning. Sudan’s Information Ministry, controlled by Hamdok supporters, alleged that the prime minister had been arrested and imprisoned after he refused to issue a statement supporting the coup—and called on Sudanese to take to the streets, leading to the day’s clashes.