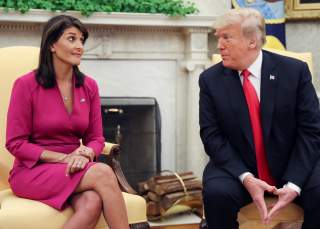 This week the annual Conservative Political Action Conference (CPAC) took place in National Harbor, Maryland, where thousands of young conservatives and activists from across the country travel for days of speeches, panels, and afterparties. A staple of the conservative movement, and hosted by the American Conservative Union (ACU), the conference has traditionally served as a pilgrimage for prospective and speculative presidential candidates to advertise their wares in front of a friendly audience.

President Donald Trump, the incumbent Republican who is set to address the conference tomorrow, will be renominated with paltry opposition. But whether Trump is reelected to a second term or leaves office at the start of next year, the 2024 Republican presidential primaries will be open wide for politicians (and others) who have brandished their resumes over the course of the Trump era.

Multiple individuals expected to launch presidential campaigns in the next three years made their appearances.

The most explicit of them was Rep. Matt Gaetz of Florida, media darling and proud “Trumper” in Congress. Gaetz has staked himself out at the politician most in line with the president’s agenda, even when the president’s policies contradict the president’s statements. Gaetz was a vociferous defender of Trump during the House impeachment hearings, going so far as to lead a crowd to disrupt them. He was also one of three Republicans to vote in favor of the War Powers Resolution on Iran earlier this year.

Gaetz’s major announcement at the conference was that he would no longer accept donations from political action committees. The use of “big money” in politics and the influence some donors carry has been deployed on both sides of the political aisle. “This PAC donation process, with the expectation of exchanging money for favors renders public service, what should be the noblest of professions, dangerously close to the oldest profession,” Gaetz said, comparing money in politics to prostitution. “I’ve never turned tricks for Washington PACs, but as of this very moment I will not pick up their money in the nightstand anymore. I will never again accept a donation from a federal political committee action committee, not one red cent.”

On the other end of the spectrum, former United Nations Ambassador Nikki Haley received a hero’s welcome by CPAC attendees. Haley, who as Governor of South Carolina was a fierce opponent of Trump’s 2016 nomination, nonetheless formed a popular coterie while in the administration. Haley, a neoconservative known for her cutthroat defense of the Saudi war on Yemen and her liberal stands on immigration, has been touted as a future presidential candidate for half a decade.

Other CPAC speakers who are likely to have 2024 on their minds are Secretary of State Mike Pompeo, a man who has monopolized power as the president’s favorite cabinet member and who wears his presidential ambitions on his sleeve; Vice President Mike Pence, the evangelical turned loyal commandant of the president; freshman Missouri Senator Josh Hawley, whose intellectual foray into economic populism has raised eyebrows in elite circles; and Texas Senator Ted Cruz, the former Tea Party firebrand who was the runner-up to Trump in the 2016 primaries.