Air Battle: What If an F-14 (That Iran Still Flies) Battled a Stealth F-22 Raptor? 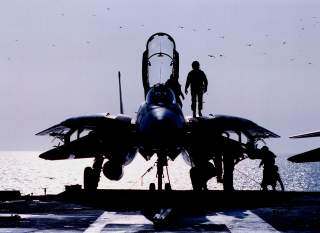 Key point: Iran has upgraded its Tomcats with new avionics and potentially new weapons, but only a handful of Tehran’s F-14s are in flyable condition—perhaps as few as 20 aircraft.

However, if by some bizarre circumstance the F-22 is embroiled in a dogfight with the F-14, the chances are the Raptor will kill the Tomcat unless the American pilot suffers from extremely bad luck or makes a serious error. The Raptor holds all of the cards in terms of instantaneous and sustained turn rates—which in the F-22’s case is greater than 30 degrees per second—and energy addition. The Raptor’s incredible specific excess power and sheer maneuverability combined with its new AIM-9X missiles makes it so that the odds are grotesquely stacked in the F-22 pilot’s favor.