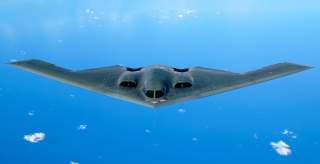 A message to Iran? Read on:

The B-61-12 gravity bomb, a GPS-guided behemoth that’s been in development since 2008, can penetrate three meters of earth before detonating and dial up a nuclear yield of between 0.3 kilotons and 50 kilotons of devastating power.

The gravity bomb touts new components and an enhanced tail for maneuvering to target, and the new upgrades were designed to make the weapon three times more accurate. And while it’s extremely unlikely that the Air Force will need to violently renovate an underground enemy command bunker anytime soon, but better to be safe than sorry when it comes to nuclear capabilities

According to Military.com, the system has already been already tested on several other delivery platforms, including the F-15E Strike Eagle and F-16 Fighting Falcon. The F-35 has recently completed a flight test with the B-61, and will soon be one more option for nuclear delivery.

It’s worth noting that the Federation of American Scientists has criticized the upgrades to the system, arguing that non-nuclear penetrators have made great strides in the field of bunker busting. Their concerns stem from a broader question: What problem is the B-61-12 trying to solve? Any strike on a weapons development facility in Iran or North Korea would not normally predicate a nuclear strike, and a pinpoint B-61-12 bunker-busting nuclear weapons suddenly puts a nuclear option on the table, literally.

But progress marches on, and now a stealth bomber can hypothetically kill any rogue dictator in their buried bunker, and irradiate it for good measure. Luckily the chance of the B-61-12 making a combat debut hovers somewhere between Dr. Strangelove and Crimson Tide, requiring many, many things to go wrong before nuclear armageddon comes for us all.