The Air Force Must Empower Decision Makers On the Front Lines 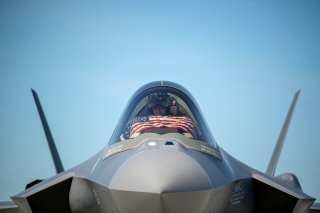 The United States and its NATO allies are growing eager to leverage the benefits of a growing fleet of interoperable F-35A Lightning II fighters strategically positioned throughout Europe.

This requires not only refining interoperability among allied nations with F-35s, but also developing an expeditionary posture to ensure assets and lethal combat teams can quickly deploy when they are needed. Successful attack operations in the twenty-first century will depend on forward positioning and combat readiness. Recognizing this fact, Air Force officials assert that new operational paradigms are needed to respond to a fast-changing threat environment.

“We need to generate dilemmas for the adversary. Given the capabilities developed by our adversaries, the way we were operating was not going to be survivable. How can we be more agile in terms of how we move stuff around?” U.S. Air Force Gen. Jeffrey Harrigian told The Mitchell Institute for Aerospace Studies in an interview.

Harrigian highlighted a key difference between the Pacific and European theaters that will greatly impact how any future conflict is fought. As European nations are typically small and located nearby other nations, Europe faces the tyranny of proximity rather than the tyranny of distance.

With this in mind, the U.S. Air Force has developed the Agile Combat Employment doctrine in order to ensure that lethal, ready, and well-prepared units can mobilize and attack quickly when and where they are needed.

In order to implement this, the military must eliminate bureaucracy and streamline operations to empower decisionmakers involved in combat. Harrigian’s command philosophy is based upon extending latitude and authority to trusted subordinates who know what their units need to prepare for combat.

“Senior officers should lead by providing guidance and giving and empowering the people in positions that are on the front lines to translate that guidance into what is most relevant for their units,” he said.

In one instance, Harrigian explained, he allowed a small unit of aircraft to travel to Estonia for interoperability and deterrence operations along the Russian border.

“They went to Estonia with eight jets and operated for four to five days. Let’s empower our units to get out there and execute and build confidence by generating combat power to the next level,” Harrigian explained.