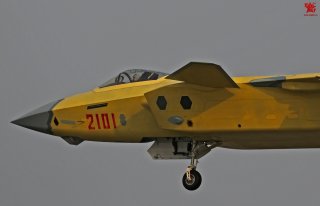 “While America is still the dominant military power on the planet today, we are being more effectively challenged militarily than at any—any—other time in our history,” he said. Kendall wasted no time identifying what he sees as the most pressing security challenge confronting the United States. “So what are my intentions now that I have this job? At a breakfast on Capitol Hill shortly after I was sworn in, I was asked by Sen. Jon Tester what my priorities were. My answer was that I had three; China, China, and China.” An Air Force press statement shows that China was mentioned twenty-seven times in the address. He only mentioned Russia three times though. Kendall went as far as to assert that he returned to public service following his tenure in the Obama administration primarily out of his concern about China’s rise.

Kendall noted that China continues to accelerate the pace of its military modernization programs. The military threat emanating from Beijing is, in Kendall’s retelling, complex and multifaceted. The People’s Liberation Army (PLA) is rapidly developing its conventional anti-access/area denial capabilities to deter, delay, and potentially defeat U.S. forces in the Pacific region in a conflict scenario involving a prospective invasion of Taiwan. While hastening to add that he does not believe Beijing intends to initiate a nuclear war, Kendall expressed concern over what he described as China’s unprecedented attempts to acquire a first-strike capability. “I am deeply concerned about the implications of China’s change in policy for nuclear stability and the potential for a catastrophic mistake,” he said.

Kendall proposed sweeping investments in a wide array of new technologies, including the upcoming B-21 Raider strategic bomber, that will help the U.S. military prevail in a great-power conflict. Additionally, he expressed confidence in the progress being made by the Next Generation Air Dominance (NGAD) program to develop a next-generation air superiority platform. He added that, in order to make budgetary room for the Air Force’s ambitious new projects, Congress should greenlight the retirement of legacy fleets that are “consuming precious resources we do need for modernization.”

“We will not succeed against a well-resourced and strategic competitor if we insist on keeping every legacy system we have,” he said. “I do understand the political constraints here, and I’m happy to work with Congress to find a better mechanism to make the changes we need, but we must move forward.” Kendall’s efforts are not new. “The Air Force must be allowed to have a mix of aircraft, systems and capabilities that maximize the ability to carry out any mission, anywhere, anytime. The service cannot afford to carry older and less capable equipment,” Kendall continued.

The service has tried for years to retire aging hardware including the U-2 spy planes and A-10 Warthog close air support aircraft, but those efforts are being obstructed by lawmakers driven, at least in part, by concerns that divestment from legacy equipment could negatively impact their districts’ economic health. Kendall, who assumed office in July, is a proponent of the “divest to invest” growth strategy that is shared by swathes of the U.S. military brass.